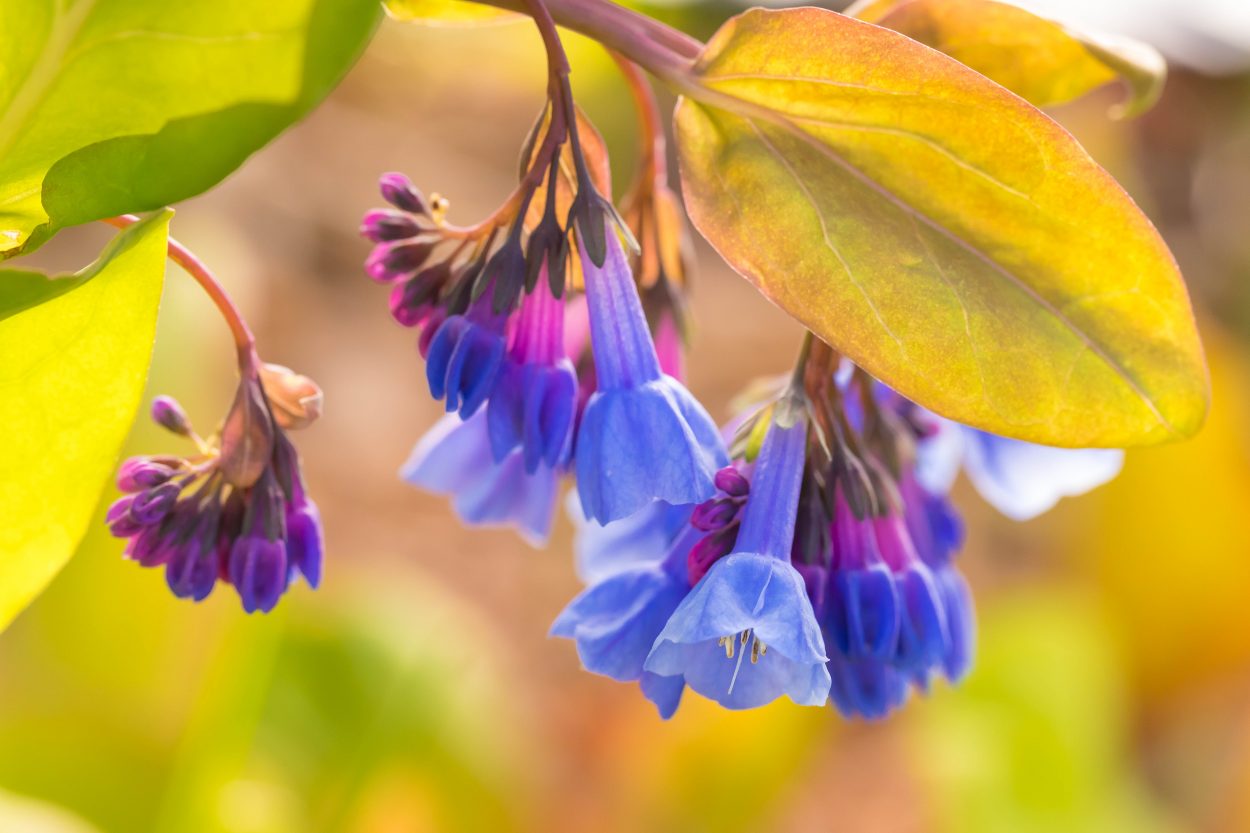 In April 1776, Thomas Jefferson noted  “a bluish colored, funnel-formed flower in lowgrounds in bloom,” in one of the earliest entries of his garden book. Jefferson certainly wasn’t the first person to become enthralled by the unusual beauty of Mertensia virginica and he wasn’t the last either. Mertensia virginica, more commonly called Virginia Bluebells have captured the hearts of many year after year in early spring with their blue trumpet-shaped blooms. In Northern Virginia alone, there are not one, but two festivals devoted entirely to bluebells: the Bluebell Festival at Merrimac Farm and the Bluebells at the Bend Festival.   Hmm, maybe we should start one here! 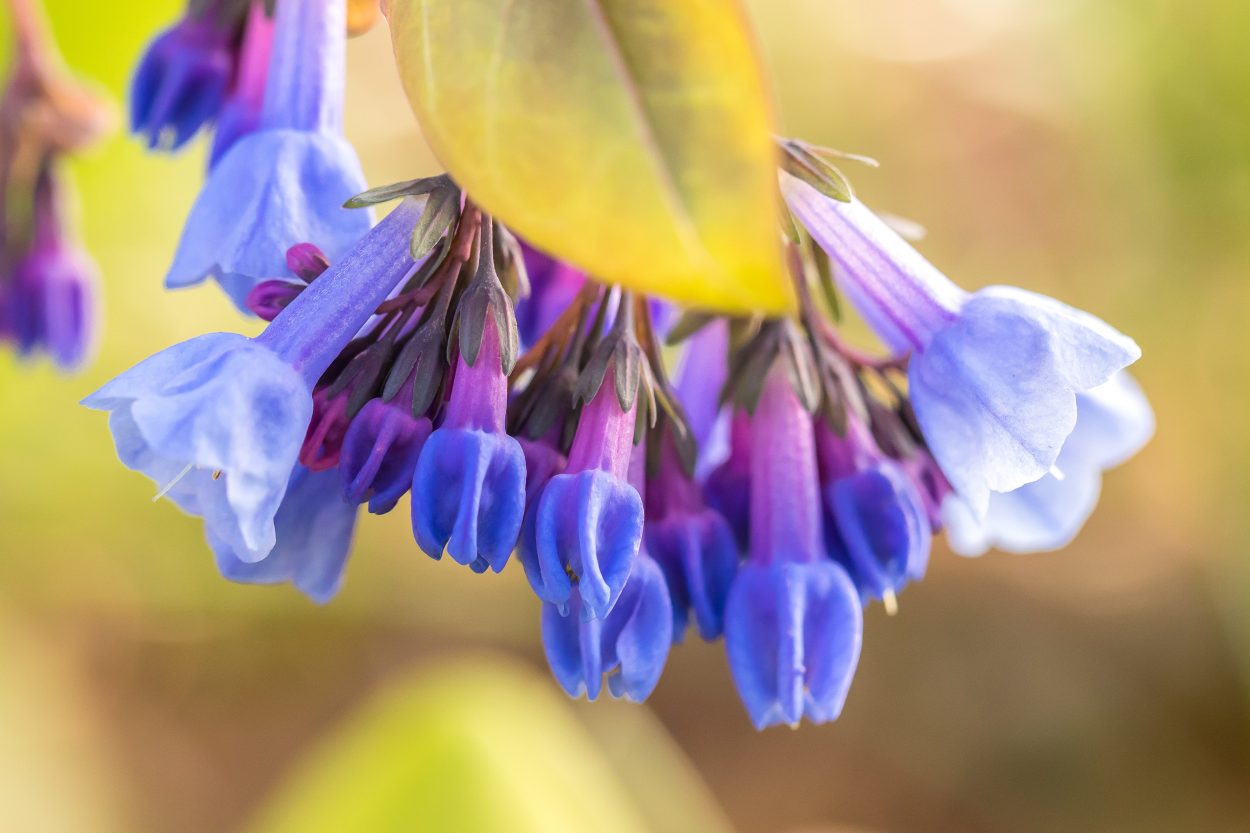 Mertensia virginica’s buds emerge pink and turn blue as they open up. Image by Tom Hennessy.

What are Virginia Bluebells?

The plants are one- to two-feet-tall. The leaves are smooth and oval-shaped with a sprouting with a deep purple color before mellowing out into a blue-ish green color. The trumpet-shaped flowers bloom in clusters near the top of the stem. The buds change from pink to purple to blue as they bloom, although occasionally you might see a pink or white bloom.

Flowering season varies from March to June. Ours are blooming now!  The blooms only last two to three weeks before becoming dormant again. This is why they are called spring ephemerals.

Virginia bluebells prefer moist, rich wetlands in shaded or partially shaded areas, but can tolerate open areas and can also tolerate dry heat for a few years before dying. Bluebells take advantage of the sunny areas in forests before the trees leaf out.

The nectar is within in a tube inside the flower so the main pollinators are bumblebees and butterflies with long proboscises to reach the nectar.

Most of the eastern half of the United States and Canada. 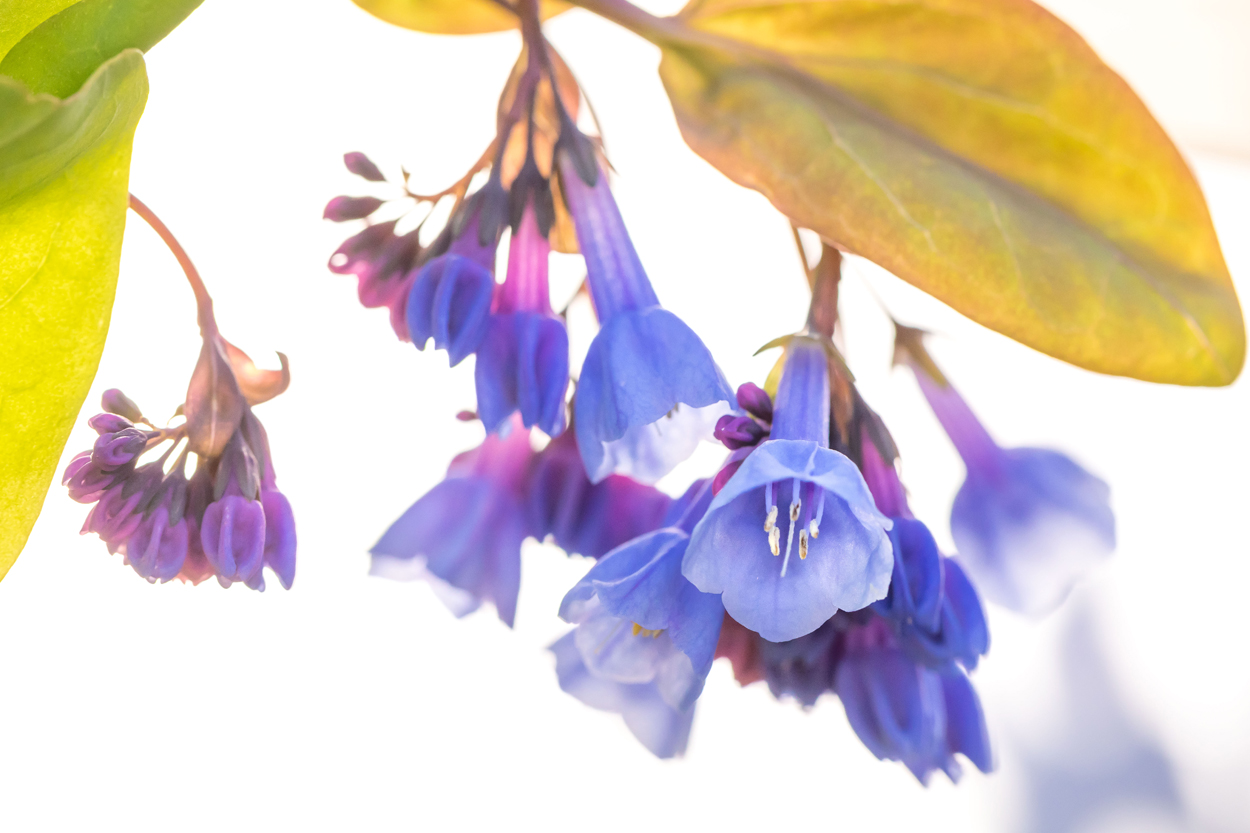 Virginia bluebells are a spring ephemeral — their blooms will only last a few weeks so make sure to enjoy them while you can. Image by Tom Hennessy.

Why is Mertensia virginica Special?

One secret to the bluebell’s charm is in its name — naturally blue flowers are so rare that only 10 percent of 280,000 flowering plant species worldwide have blue blooms. The subtle shift from powdery pink buds to incandescent blue flowers make Virginia bluebells all the more enchanting.  Actually, this kind of color change is fairly common for the Boraginaceae (borage family). Bluebell relatives, Myosotis spp. (Forget-Me-Nots) and Pulmonaria spp. (Lungwort) both change colors over the course of blooming, as well.  The color change is caused by a shift in the pH or acidity of the petals over time.

These plants are incredibly adept at forming colonies on their own in the right location.  They can make for a beautiful surprise when you’re walking through the woods and suddenly stumble across a stretch bluebell lined trail. In the early summer, as the plant is going dormant, each bloom will shed its petals and produce four small seeds. The seeds are released naturally once ripened. These self-sowing seeds can spread especially easily if carried away along a riverbank after flooding. Bluebells also boast an underground rhizome system.  This enables them to store energy to grow and spread.

As both casual enjoyers of nature and gardeners, it’s very important to respect the native wildflower status of Virginia bluebells by leaving them undisrupted in the wild. If you’re purchasing bluebells, please take the time to ensure that they were nursery propagated and not wild-collected.

Some Fun Facts About Virginia Bluebells

Mertensia virginica is in bloom now.  You can find them in the Flagler Garden here at Lewis Ginter Botanical Garden or along the trails of the James River Park System. 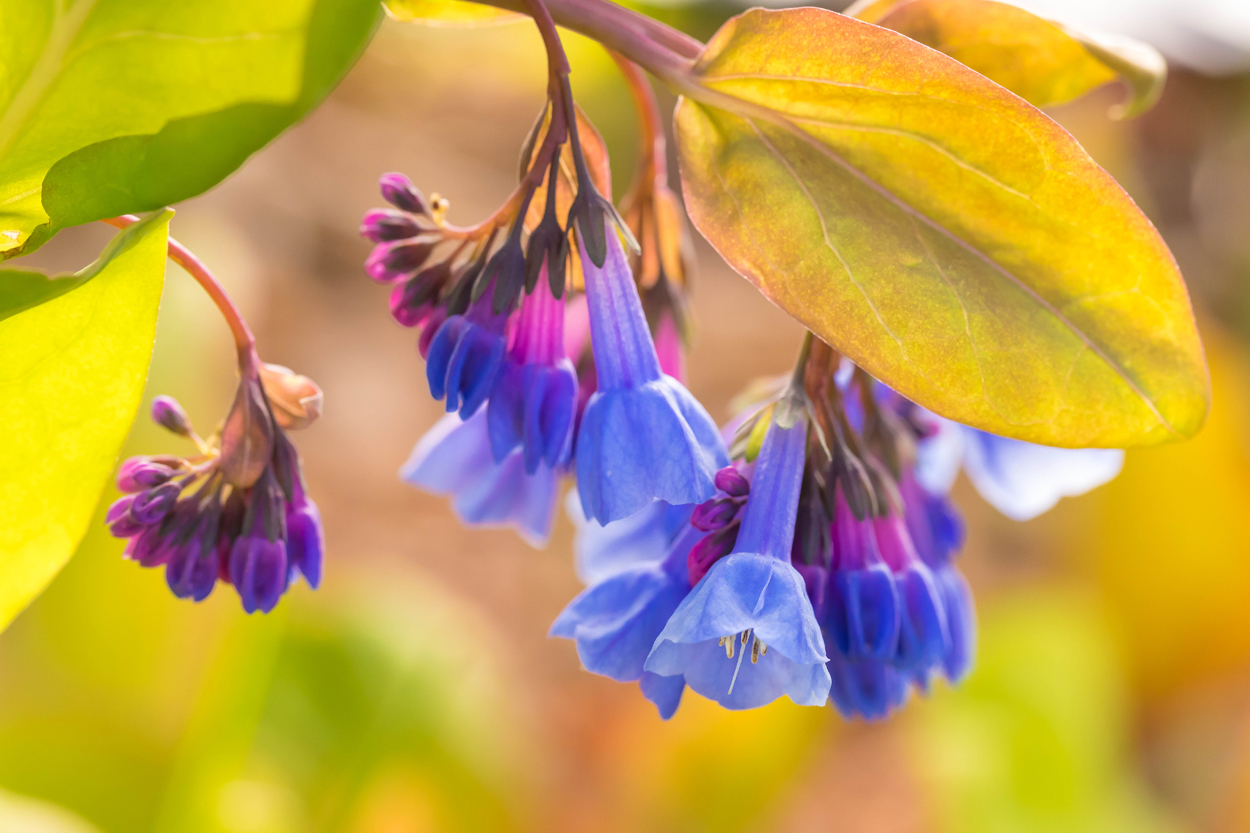 The leaves of Mertensia virginica are smooth and oval-shaped with a sprouting with a deep purple color before mellowing out into a blue-ish green color.   Image by Tom Hennessy.

Maureen McNabb is a Public Relations & Marketing Intern at Lewis Ginter Botanical Garden with a background in journalism, videography and multimedia storytelling. She's interested in community building, empowering individuals and finding compelling stories that tend to get lost within the bigger picture.

Experience the wonderful world of butterflies!

Lewis Ginter Botanical Garden was voted one of the best botanical gardens in the nation! Spring is a great time to visit and see why.