Moths of Virginia as Art 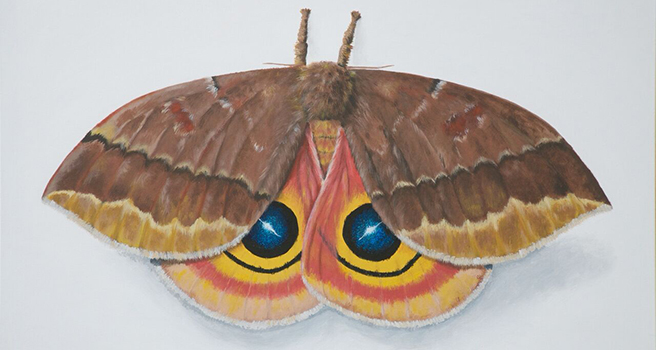 Our exhibit, Out of the Darkness: Moths of Virginia, focuses on the sophisticated detail, beauty and function of moths in our locality. Artist Deborah Davis is a painter with a “mothing” habit. A trained herbalist, Deborah Davis studied painting at Virginia Commonwealth University. Upon visiting her studio just outside of Charlottesville, it was clear to me how much passion she has for her subjects, as well as their role in our ecosystem. Davis’ work not only embraces detail, but the harmonious nature and importance of the creatures in our landscape. Davis took some time to answer questions about her paintings and the underrated moth.

When did you first start “mothing,” and what led you to painting moths?
Deborah: I actually started painting moths before I was an active “moth-er.” I would occasionally find a dead moth and keep it. I was really attracted to the patterns and colors. My earliest paintings from about five years ago were from random dead specimens. I have been interested in moths and butterflies since childhood, but my involvement really went deeper when a new Peterson’s Guide to Moths came out a few years ago.

It was impressive visiting your studio and viewing the collection of images and species of moths you have been able to identify. How many moths have you observed in your backyard alone, and how do you attract them?
I have been using UV lights and a white sheet set up for about 3 years now. At this time I have managed to ID just over 500 species from my yard. There are a couple thousand that can be found in Central Virginia.

Tell me about what moths have to offer to the local habitat.
Moths are important members of the ecosystem. Many function as pollinators. They are also critical as food for birds. To raise a brood of young, birds need insects as a source of protein. Caterpillars are the main diet.

You mention putting moths in the refrigerator in order to lessen their speed. How long will you work on a painting? Do you work from photographs, or from a live specimen?
I place them in the refrigerator overnight to slow them down long enough for a photo shoot in daylight. I actually paint from my photographs. It takes about a week to complete a painting. I let them go the next day after I photograph them.

The magnification of the moth transforms the subject, and the moths seem to come off the canvas. Can you explain your decision to paint large on a white backdrop?
The large scale of the paintings is important. It gives a feeling of intimacy and allows the viewer a chance to observe details that aren’t usually apparent in a casual encounter. The moths are depicted in normal resting poses. At first I used more painterly backgrounds, but decided to connect them to the surface by including shadows. The flat white surface also connects the paintings to each other. They work well in multiple groupings.

The range of colors, geometric patterns, and textures in moths are breathtaking. What are the explanations for these patterns and colors?
The moths often blend into their surroundings. Many mimic leaves, bark, light and shadows. They can virtually disappear during the day. It gives those hungry birds more of a challenge. Of course moths are also tasty to frogs, lizards, spiders, and bats. Those critters are often lurking around my moth lights at night.

“The Underrated Beauty of Moths” featured on the Washington Post

Out of the Darkness: Moths of Virginia