Mushrooms are Popping up all Over & Milk Thistle to the Rescue 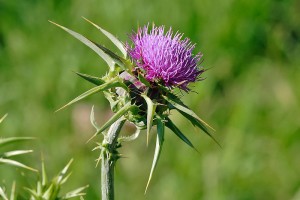 Here at the Garden and across Virginia, we’ve had a lot of mushrooms popping up recently — probably because of all the rain we’ve had.  Last week, you may have heard about the Northern Virginia man who became ill from eating mushrooms from his back yard.  The Times-Dispatch ran the article on the front page of Metro on Saturday (Oct. 8).  The article says:

“A Springfield man nearly died in September after picking and eating mushrooms that he didn’t realize were toxic. According to news reports, Frank Constantinopla, 49, recovered after doctors at Georgetown University Hospital gave him an experimental drug made from milk thistle, a plant used in holistic remedies.”

Good thing the man is ok, and that the doctors were able to treat him. Did you know that we also have a milk thistle plant (Silybum marianum) in the Healing Garden at Lewis Ginter? You might even recognize its bloom and interesting foliage, pictured.  Currently, the plant is dormant, but the extract from the seeds has been used, at least since the Middle Ages to treat maladies related to the liver.  It was interesting to hear it described as “an innovative new treatment” on the evening TV news.