My Adventures with the Yelp Small Business Advisory Council 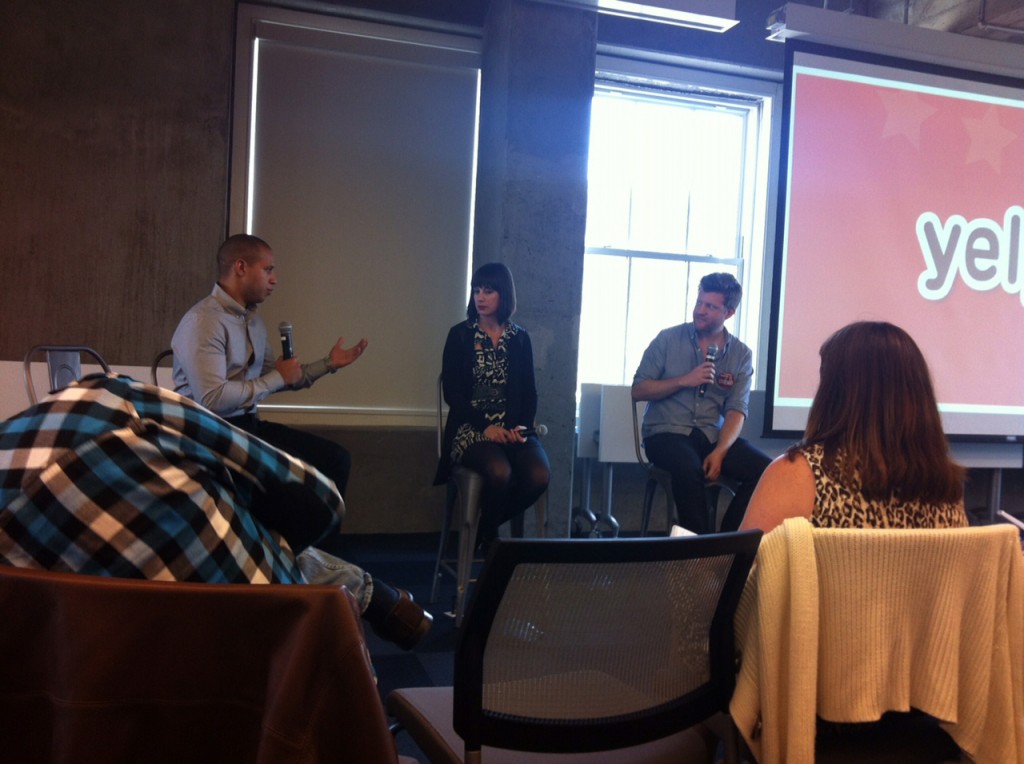 This summer I was selected to serve on Yelp’s Small Business Advisory Council (YSBAC), representing Lewis Ginter Botanical Garden. YSBAC is made up of a very diverse group of business owners from the United States, Canada, Ireland, the United Kingdom, and Australia.  The YSBAC members give feedback on the Yelp app and suggest improvements for Yelp services for small businesses, or attractions like us. Here at the Garden, we use Yelp to gain feedback  from our visitors and members. For example: What are our visitors favorite things?  What could we improve upon?

I felt that as a representative of a non-profit attraction, I could offer Yelp a different perspective than many of the other small business owners.  Last week, Yelp flew many of the YSBAC members out to their San Francisco headquarters to learn more about how Yelp works, how we can better use it, and to give our feedback on how they can improve — it was like we got to do our own Yelp review of Yelp!  It was also a great way to get to know the other YSBAC members from across the globe, and get to know Yelp’s staff. We were able to speak directly with COO Geoff Donaker and we had lunch with Yelp Co-founder and CEO Jeremy Stoppelman.

Allow me to get side-tracked here for a second to tell you a story. CEO Jeremy is kind of a rock star. OK, not kind of, but really.  I admire him because he speaks his mind, and encourages his employees to do the same, regardless of their rank or position in the company. He doesn’t mind disrupting the status quo for a good cause, and that sentiment can be felt in Yelp’s corporate culture.  I also admire Jeremy because he makes his business decisions based on his passions: he could have sold Yelp long ago and retired.  Needless to say, when I scored the seat next to Jeremy at lunch, I was excited.  We went around the table and introduced ourselves.  I was last.  When I explained that I was from a non-profit botanical garden in Richmond, VA. Jeremy shocked me by telling me that his first job ever, was working in a botanical garden in Virginia — Meadowlark Botanical Gardens, in Vienna, VA. In fact,  we both grew up in Northern Virginia, and went to nearby high schools, graduating several years apart.  When I asked what Jeremy did at the botanical garden, he unapologetically said, “Dig holes.”   The smile across my face was so big. I love it!

So getting back to the story….before I left Richmond, I did my homework talking to some other Richmond attractions, like the Valentine Richmond History Center, who use Yelp to advertise.  As of yet, the Garden hasn’t advertised on Yelp, so it was helpful to speak to a Richmond attraction who had. I was able to deliver feedback to Yelp about their experience. 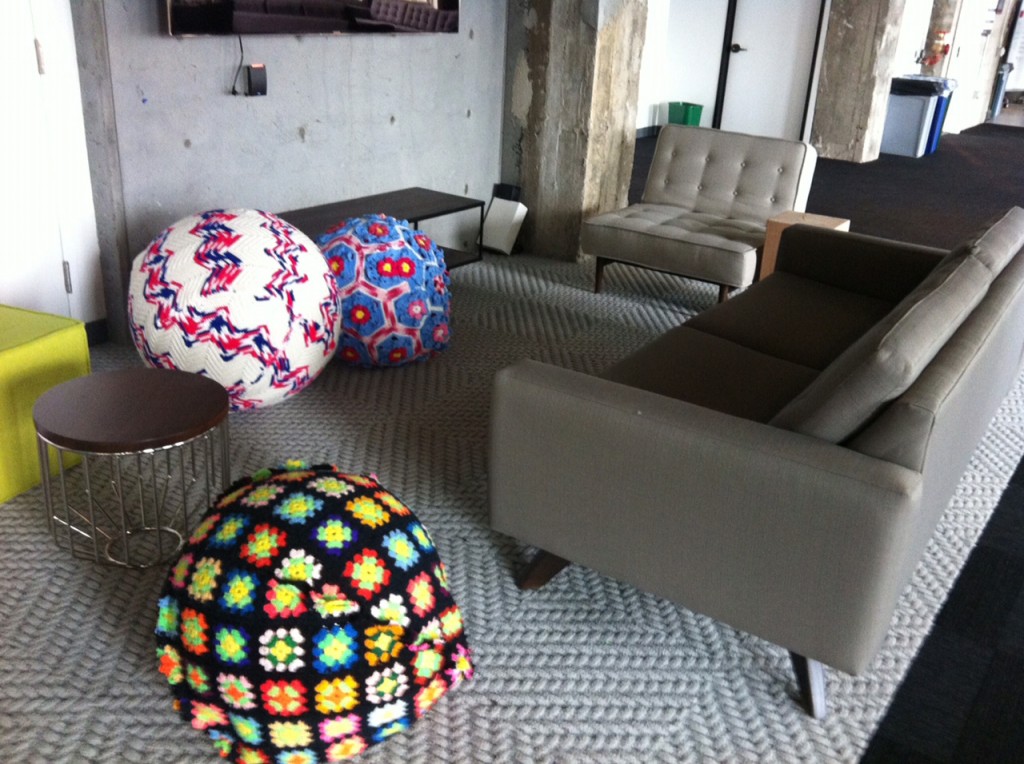 I loved the feel of Yelp’s living room, with recycled “Nana blankets” on the bean bags. Not to mention the full- time barista, fully stocked kitchen, and beer tap. Didn’t get a chance to play on the Foosball table, but I would have really liked that.

Also, I was able to express some suggestions to them about how they might better serve non-traditional businesses like ours — who don’t come up under Yelp searches the way they would like.  Yelp COO Geoff Donaker was very responsive to my concern that if you search Yelp for “Flowers and Plants,” or similar terms,  in Richmond,VA, Lewis Ginter Botanical Garden doesn’t come up in the listings. For Yelp, this is important feedback, because we aren’t the only small business or attraction who struggle with categorizing ourselves so that people can find us.

Speaking of which,  while I was touring San Francisco, I used Yelp to find things to do, find restaurants that suit my taste, and fun stuff for my kids to do in Tiburon, a nearby town where we stayed.  It was under this last  Yelp search that the magic of Yelp happened and we had the highlight of our trip.  We found “Uncle Fishbit’s” Yelp listing for the Hippy Tree.  Sounds interesting doesn’t it?  You already knew I was a tree-hugger, didn’t you? I think this kind of content is the next big thing for Yelp.  They can feature hip insider information that you can’t find anywhere else.  My goal on the YSBAC is to make it easier for attractions and regional tourism outlets to get more great content like this posted, and to make it easy to find.  It’s a win-win; it adds value for the attractions, and it adds value for the users.

When you see the photos of this place, that you can really find no other way than by Yelp, or word of mouth, you’ll see why this was a highlight  of our trip. 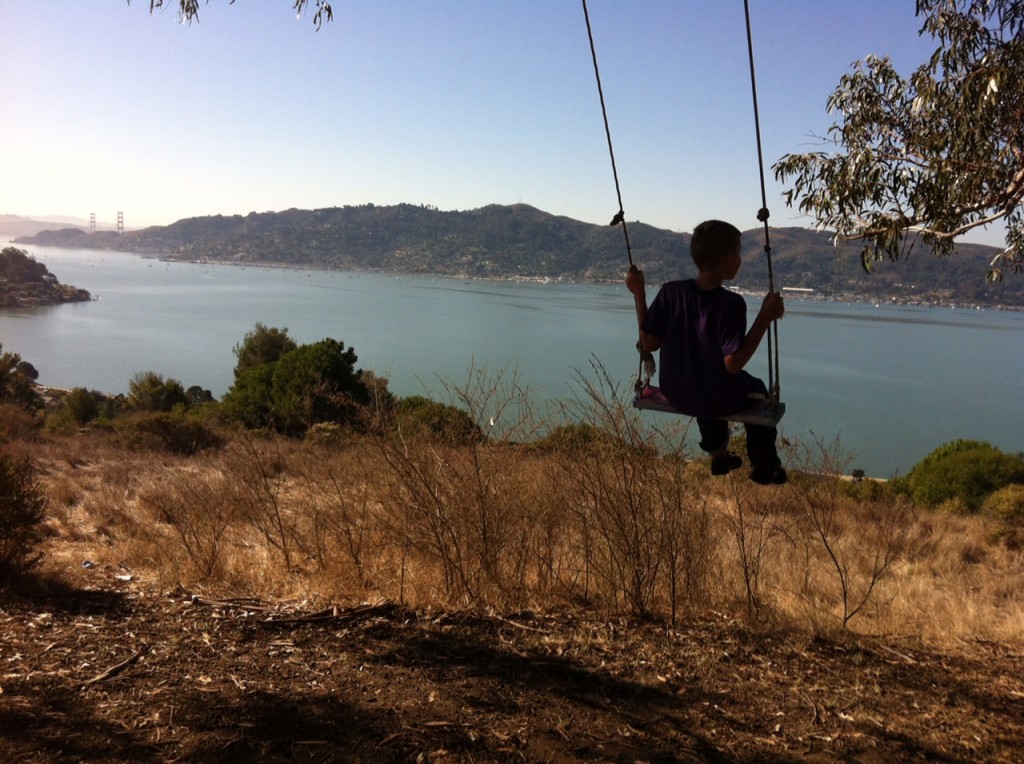 My son on the swing at the Hippy Tree. 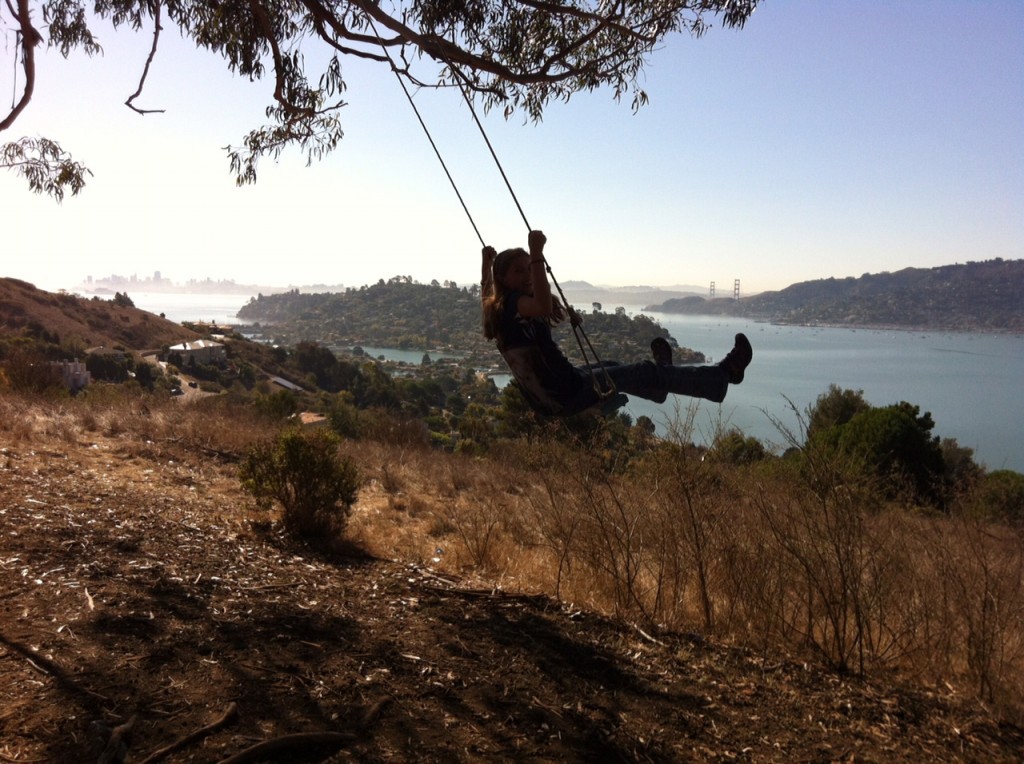 My daughter – yes that really is both the Bay Bridge, the San Francisco skyline, & the Golden Gate Bridge in the same view.

So what’s next for the Garden and our Yelp strategy? Much will stay the same — I’ll continue to respond to all reviews — both positive and negative.  I’ll keep monitoring our Yelp traffic to see how often Yelp is bringing business to the Garden.  But some things will change: I’ve already started recommending related businesses (such as the Robins Tea House and the Garden Cafe) via our Yelp account. I’ve spent some time examining our Yelp “categories” to make sure that we are doing the most we can to make sure that the people looking for us can find us.  (If Yelp’s listening, I’d like to see the number of categories and variety of categories expanded to meet the needs of attractions and small businesses that don’t fit the mold.) And, I’ve taken a look at how we describe ourselves in the “about” section to make sure it includes keywords such as blooms and flowers,  helping Yelp’s search engines direct people who are looking for “flowers and plants” back to us.

Oh, and next month, look for us at a Yelp Helps event at Gallery 5. Did you know that Yelp works with local non-profits to raise awareness, money and recruit volunteers? We didn’t either. Stay tuned for more on that event. 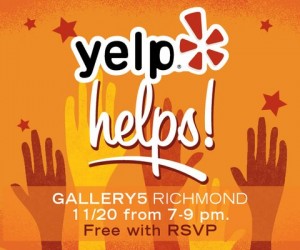 One additional suggestion that my fellow YSBAC members had for Lewis Ginter Botanical Garden was to start a Yelp Check-in Offer.  I’m working with staff now to come up with a great one, so stay tuned!