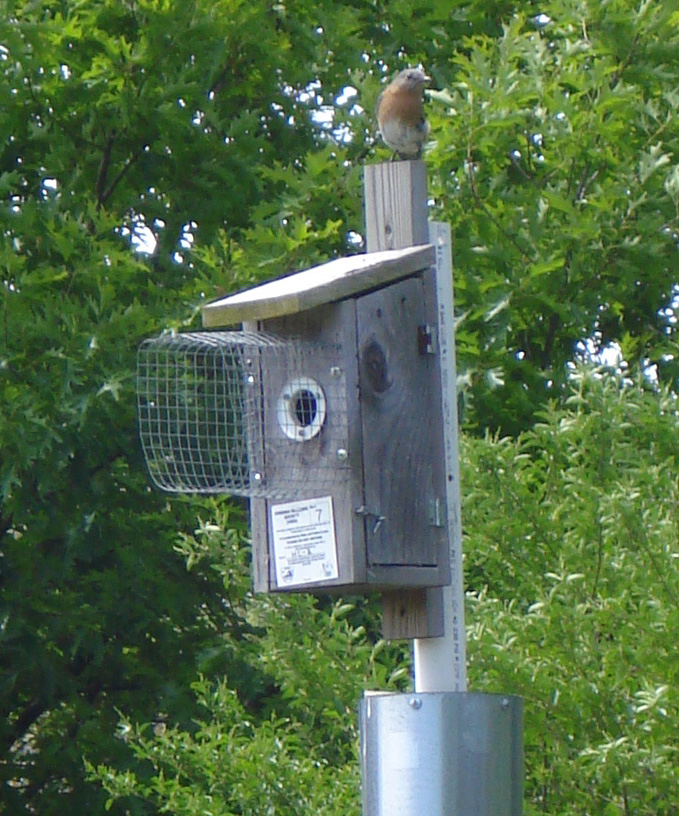 A bluebird at Lewis Ginter Botanical Garden, exactly what we were going for!

You may have read my last post about the Lewis Ginter Bluebird Trail where I mentioned that we had 7 out of 14 nest boxes occupied by chickadees and only one box with hopeful signs of bluebird activity. In the last month there has been quite a lot of nesting activity on the trail, including one box with bluebird nestlings and another box with a partially completed bluebird nest. The picture you see here shows a female Bluebird perched on top of her box in which she had laid 5 powder-blue eggs. Since taking this photo in early May, there have been two confirmed nestlings in the nest. In the bluebird world, the female does all the incubating. The male gets a bit of a break until the eggs hatch and then gets pressed into service feeding the endlessly hungry hatchlings until they have developed enough to fend for themselves. I hope to report successful fledgling in my next report.

At my last writing I promised to write a little about nest cavity competition. In the untouched forest there would be plenty of cavities for nesting. Dead trees excavated by woodpeckers or other birds would be part of the landscape. Since people consider dead trees as unsightly and we now occupy a large percentage of the landscape, the number of available cavities is small. Chickadees are quick to occupy many of the smaller nest sites. That is why we have so many of them in our nest boxes. Carolina wrens, house wrens, and tufted titmouse are the local native birds most likely to compete for the cavities that bluebirds prefer. If that is not enough, purple martins and tree swallows are likely to use cavities if there are not enough opportunities at their desired heights.  Add to this the very aggressive non-native house sparrow, and European starling, you can see where the bluebird might get into trouble. The Bluebird Trail at Lewis Ginter Botanical Garden is one way we can tip the scale of competition in favor of the bluebird. If we get lucky, the one confirmed bluebird nest site, along with another suspected site , could produce a number of bluebirds this year. Let us hope so!  Tune in next time for an update.