So Where are the Bluebirds?

Since my last post, Linda Chaney and I have started our monitoring of the Lewis Ginter Bluebird Trail in earnest.  If you should happen to see one of our boxes you will notice a label on the front. These have been added so each box can be referred to by number and so we will have an accurate record of all the goings on at each location. Later we will send all this information to the Virginia Bluebird Society  to become part of the Statewide statistics. 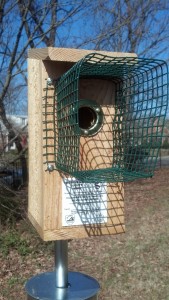 You have probably noticed that we are experiencing an unusually cold spring so it comes as no surprise that nesting activity is going to be a little late. Still, the chickadees seem to have the upper hand. We have found nesting material in 4 out of the 14 nest boxes on our trail. I can personally verify that chickadees occupy one of the boxes since I caught one leaving the box as I approached. The other three boxes have similar nests, all made from moss, in various stages of completion.  So I strongly suspect Chickadees are building in these boxes as well.

Typically, Bluebirds don’t begin their nesting until late March or early April. Like us, they like it warm. This serves them well since their primary diet consists of insects and insect larvae.  Insects and their Larvae eat a lot of vegetation and there isn’t much of that until it gets warm enough. There is no sense in starting a family of  bluebirds until there is food to feed the young. This may prompt you to ask, how do the mature birds feed themselves in winter? They switch to a diet of berries! That resource is about depleted by spring and there won’t be much of that again until fall.

In my next post I will talk about nesting competition since there may be more of that going on by then.