I am convinced that pick-up sticks was created by a clever mom who found herself surrounded in a garden of sticks that needed tidying.  It is actually a parlor game designed to challenge players both physically and mentally.  A designated player releases a bundle of sticks on a flat surface and each player is then required to remove a stick from the pile without disturbing the remaining ones.  Players take turns until all sticks are picked up and the player who has successfully picked up the most sticks is declared ‘winner’.  Any game that rewards the person who has done the most work must be the invention of a clever mom, or perhaps, a tired one.  When I researched the game, I read that the game ‘sticks’ are made out of “ivory, bone, wood, bamboo, straw, reed, rush, yarrow, or plastics.”  These are materials that are found all over the world.  Sticks are found all over the world.  And I guess moms all over the world need help picking them up. Last week, I worked with a team of horticulture volunteers and pruned some of the shrubs in the Lewis Ginter Children’s Garden. 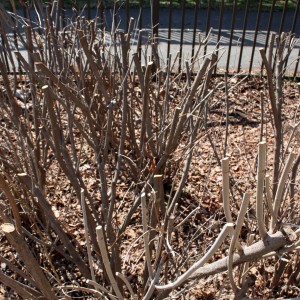 I could have used some help picking up the viburnum branches that I had been snipping in an area known as the bird blind.  My rhythmic whacks at this living plant in the Garden had taken it from shrub-to-nub and straight branches lay all around me as if I were standing in the middle of a game of Pick-up Sticks and I was the only stick standing clear for plucking up out of the pile.

Many of the sticks were collected and hauled away to a composting pile, just out of sight and others were re-purposed.  Upon my return to the Garden, I recognized that some of the viburnum limbs had become part of a special project in an activity area under the platform, known as Stick Studio. The project reminded me of Patrick Dougherty’s “Diamonds in the Rough” sculpture, which is on display in the Anderson Meadow. It was a creative structure by design, both ornamental and functional, and it appeared that it could serve as a kind of shelter for someone or something small.  I realized that this structure was made by one or more Garden visitors and acknowledged that little hands are handy not only for picking up sticks, but for laying them as well. 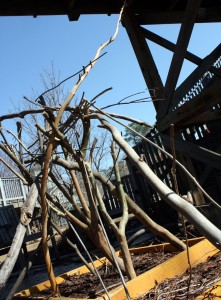 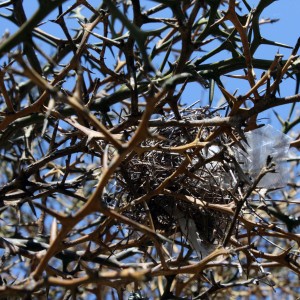 A nest in the hardy orange tree (Poncirus trifoliata).

While in the Garden, I noticed another creation woven with sticks.  It was high in the branches of the hardy orange tree.  This was also a kind of shelter, for something small.

I recalled the morning I spent cutting branches and collecting twigs and marveled at the wise ways a parent can turn work into play.  And I delighted to further ponder how a child’s play, in turn, can create such a great work!  Come and see for yourself.