Something special happens to people when they learn about pawpaws for the first time. Their eyes widen, their brows furrow, and they say things like, “What does it taste like?” or “It grows here? In Virginia?” For many people, this moment turns into an ongoing curiosity, and in some cases even an engrossing obsession. I have often heard it described by pawpaw enthusiasts as “getting bit by the pawpaw bug.”

I was bit by this figurative pawpaw bug a little under a year ago. I was sitting in a permaculture workshop at the Virginia Association for Biological Farming conference and a man named Michael Judd was teaching us all about how he was growing a food forest on his property in Maryland. One of the main trees that he was using to create his “permaculture patches” was the pawpaw; a native fruit that tastes like some combination of banana, mango, pineapple, vanilla (and in my opinion lychee). The pawpaw or Asimina triloba is in the Annonaceae (custard apple) family, which also includes the popular tropical fruit called the guanabana, or soursop. The curious thing about the pawpaw though is that it is the only fruit in this family that is not native to the tropics, though its flavor would make you think otherwise. Not only is it native to the United States, but its native region stretches as far north as Canada. 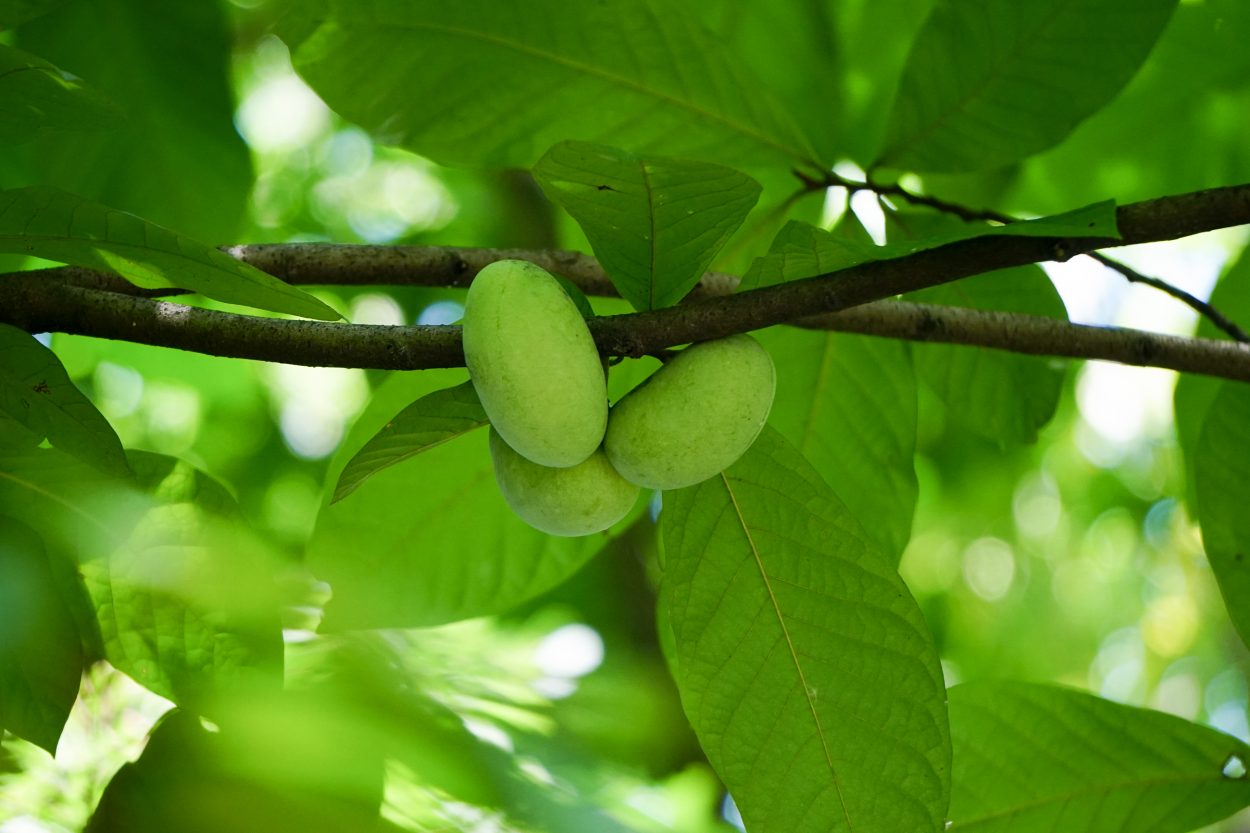 Pawpaws at Pony Pasture, August of this year

The pawpaw grows in the understory of many Appalachian woods and along river banks, including the banks of our very own James River and in the Children’s Garden at Lewis Ginter. It has been growing right in our backyards since before our backyards even existed. In fact the pawpaw has quite a history. It was grown and eaten by Native Americans, helped feed Lewis and Clark on their expeditions, and is thought to have been a food source along parts of the Underground Railroad. With its rich past, I often wonder how the pawpaw has become such a forgotten treasure, usually found only by foraging in the woods or, if you’re lucky, at a local farmers market or health food store. The pawpaw has many obstacles keeping it from becoming a commercial fruit. Its skin is very thin and bruises easily, and once it begins to ripen, there is no stopping it.

Luckily though, there are pawpaw enthusiasts—food scientists, archaeologists, and farmers who have taken it upon themselves to make sure that the pawpaw is all but left to rot on the forest floor. Once a year, these enthusiasts gather at the Ohio Pawpaw Festival to swap information, share their knowledge with the public, and of course eat lots and lots of pawpaws. This year I was lucky enough to get to attend. I found out about the festival while reading the book, Pawpaw: In Search of America’s Forgotten Fruit, by Andrew Moore, an incredibly interesting resource for all things pawpaw, available in the Lora Robins Library at Lewis Ginter Botanical Garden. 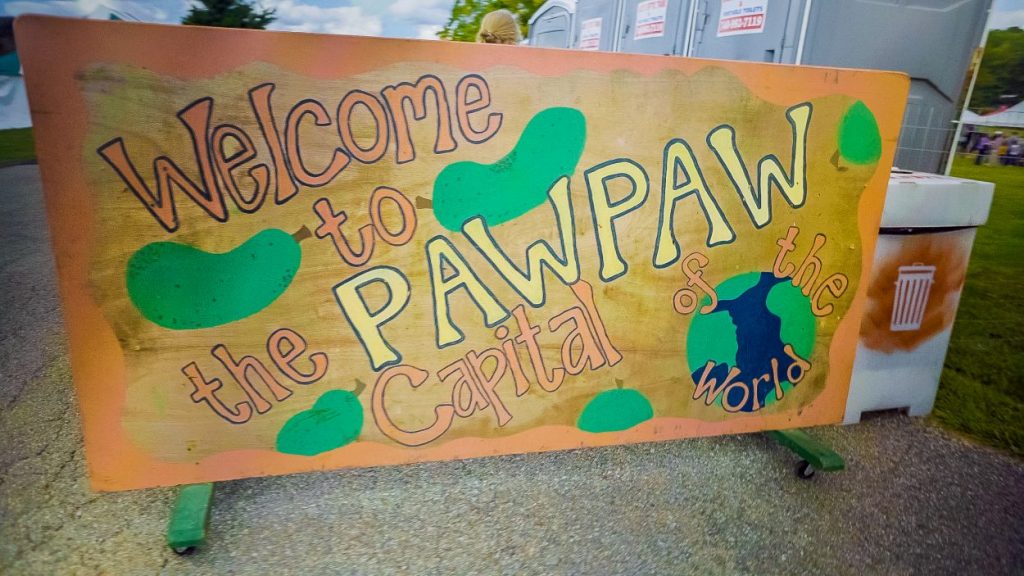 Entrance to the Ohio Pawpaw Festival

The Ohio Pawpaw Festival is held every year on the banks of Lake Snowden in Albany, Ohio. You can buy a weekend pass and camp at the lake for the entire three-day experience. The best way I can describe it is the pawpaw version of a state fair, with a side of music festival and a whole lot of education. There are pawpaw eating contests, food trucks selling specialty pawpaw menu items, and pawpaw beers brewed by local breweries. There are four tents entirely devoted to education: the Pawpaw Tent, the Ohio Country Fair Tent, the Kids Tent, and the Pollinator Tent. There were also East of the River Shawnee presentations to tie in the rich Native American history of the pawpaw. 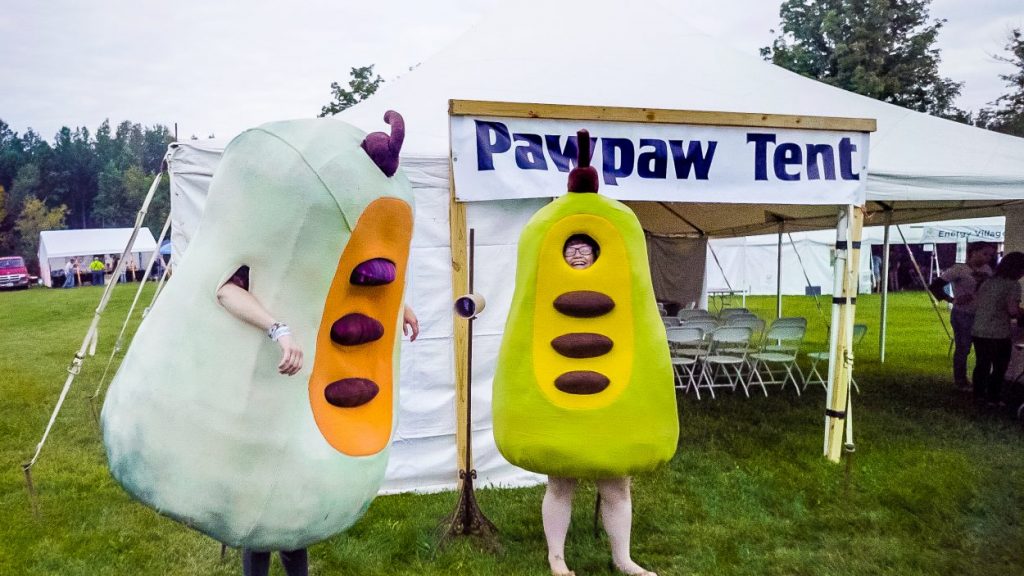 Pawpaw people in front of the Pawpaw Tent where talks were held.

Having been bit hard by the pawpaw bug, I of course spent most of my time in the Pawpaw Tent listening to talks by food scientists, pawpaw farmers, and archeologists who have devoted much of their lives to researching and growing pawpaws. My first class was with Chris Chmiel, a founder of the Ohio Pawpaw Festival as well as a pawpaw farmer and county commissioner in Albany, Ohio. Chmiel walked the group of us off of the festival grounds, around Lake Snowden, to a pawpaw patch growing about 100 feet from our campsite. He took us down into the woods and showed us some trees that he had grafted there himself. He briefly explained how to tell when a pawpaw is ready for picking before plucking a ripe specimen off of a tree. He asked, “Who hasn’t had a pawpaw yet today?” and swiftly handed me a roughly cut chunk of the custardy fruit. What a way to have my first Ohio pawpaw—echoing the days of Lewis and Clark, explorers who I imagine walked into the woods just like we did that day, to pluck a fresh fruit from the tree. 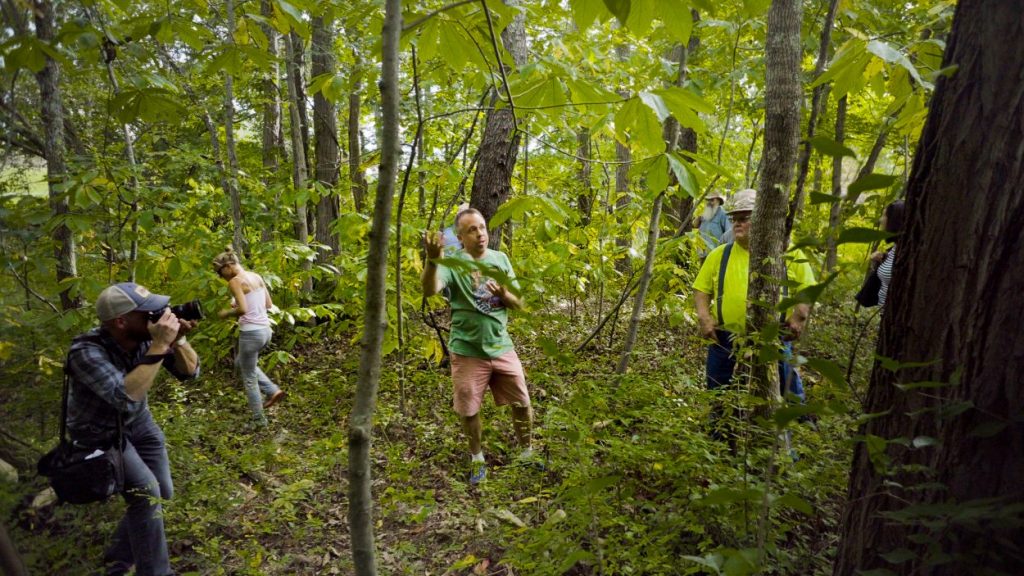 I should mention that in some of the talks I attended, speakers and audience members brought up the controversy surrounding the pawpaw. I heard people talk about cancer-fighting properties, and some argued that pawpaw could help battle cancer cells, something Andrew Moore writes about in Pawpaw: In Search of America’s Forgotten Fruit. On the other side of the spectrum, I heard people ask about the possible neurotoxicity of the pawpaw. The sense I got from most of the pawpaw experts was that these extreme positives and negatives would generally come from certain properties of the plant being extracted and concentrated, however, currently there does not seem to be enough research to prove or disprove any of these theories or claims.

Between talks, I walked over to the food truck court to explore the specialty menu items each vendor had prepared. I made a commitment to eat at least one pawpaw-containing item per meal. Throughout the course of the weekend, I ate pawpaw-jackfruit tamales, pawpaw pico de gallo, a pawpaw waffle with pawpaw whipped cream, a pizza with pawpaw sauce, pawpaw ice cream, a pawpaw curry puff, pawpaw beer, and fresh pawpaws straight from Chris Chmiel’s farm, Integration Acres.

We also explored the marketplace area where local craft makers sold glass blown pawpaws, felted pawpaws, pawpaw tote bags and t-shirts, pawpaw tea sets, pawpaw temporary tattoos and pawpaw plants ranging from seedlings to six-foot trees. There was even a full schedule of bands playing a wide range of music, each starting off their sets by shouting something along the lines of, “Let’s hear it for the pawpaw!” 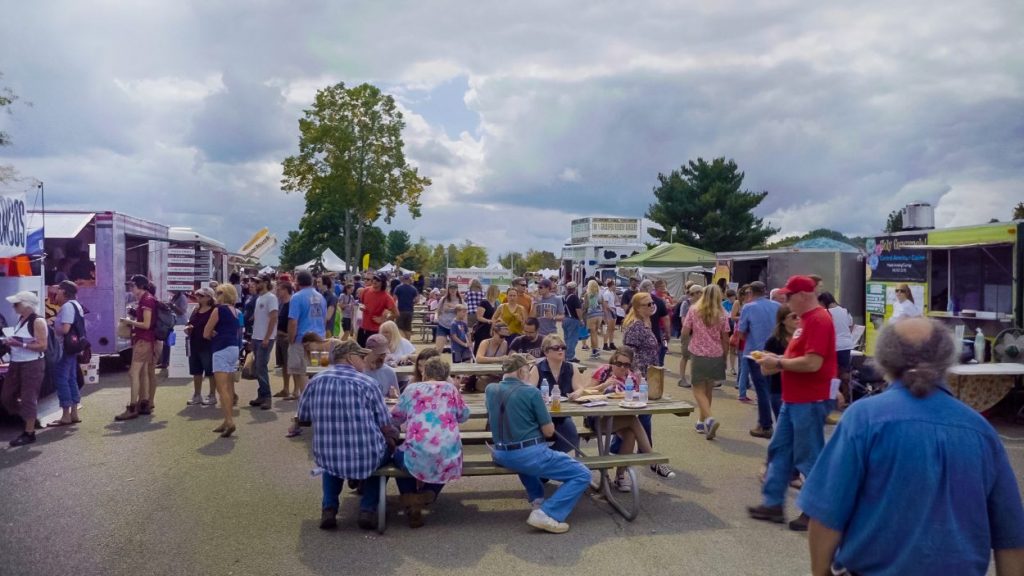 The food truck court. Almost every vendor had at least one pawpaw based menu item!

Though I really enjoyed the food and music at the festival, my paramount pawpaw moment happened on the last day of the trip. Chris Chmiel took a group of us—anyone who was interested was welcome—to tour his farm and to be a part of the pawpaw harvest. He drove about ten of us in a van down the curvy country roads, pointing out pawpaw trees wherever he saw them and taking calls all along the way to let locals know where they could meet him to sell him their backyard fruit.

After about a fifteen minute drive, we pulled up to Chmiel’s wooden farm home. He walked us around to the side of the house where his pawpaw forest grows, a sea of green trees planted in the sunlight, providing shade for the living understory beneath. He handed us each a basket and took us all on a walk through his food forest, answering questions and encouraging us to pick up all the ripe pawpaws we could find. We quickly came upon Chmiel’s goats, fellow wanderers of the forest that maintain the brush and provide fertilizer. After the harvesting was finished, we toured buildings where they pulp the pawpaws by hand and use a machine to separate the large seeds. Integration Acres is the largest producer of frozen pawpaw pulp in the United States. They are truly paving the way to this forgotten fruit’s future. Chmiel has become somewhat of a spokesperson for the pawpaw, interviewed by NPR back in 2014. 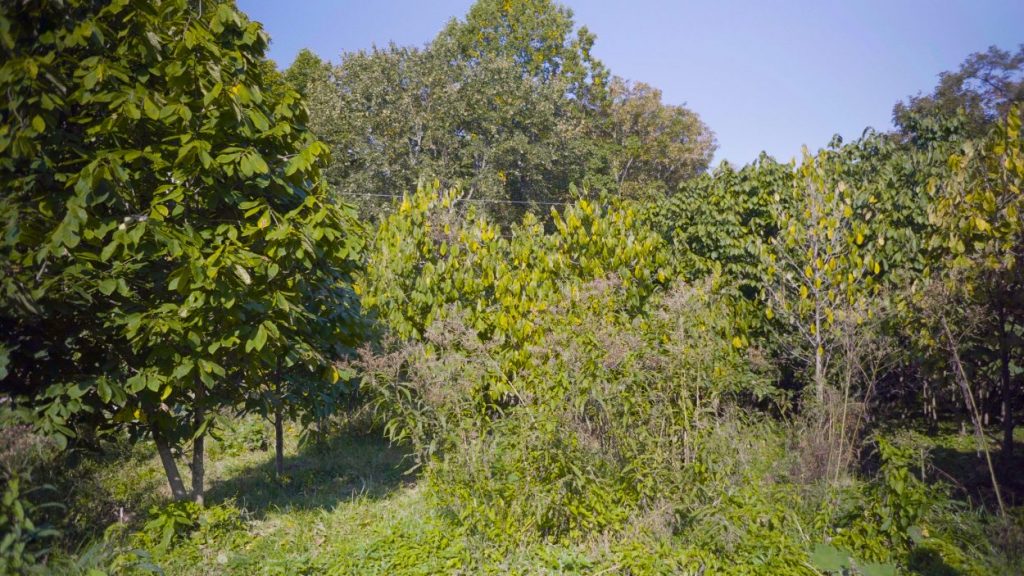 The last building Chmiel took us in on his farm was his very own pawpaw museum. It is a small brick building that you might mistake for a shed at first glance. The inside is not nearly finished, which made it that much more of a treat to see in such an early state. There is an antique cabinet with glass doors showing old bottles of pawpaw beer and past festival paraphernalia. Tucked in the corner is a wooden chair that has been painted all over with pawpaw flowers and fruit. Hanging on the wall is the certificate they received in 2009 when Ohio declared the pawpaw the official state fruit. Huddled in this small room, it was impossible not to feel inspired by how much one person has done to revitalize the fruit we’d all grown to be so passionate about. And it’s not just Ohio that loves the pawpaw. Pawpaws are becoming exceptionally “pawpular” everywhere, and even recently have been dubbed the hipster banana! 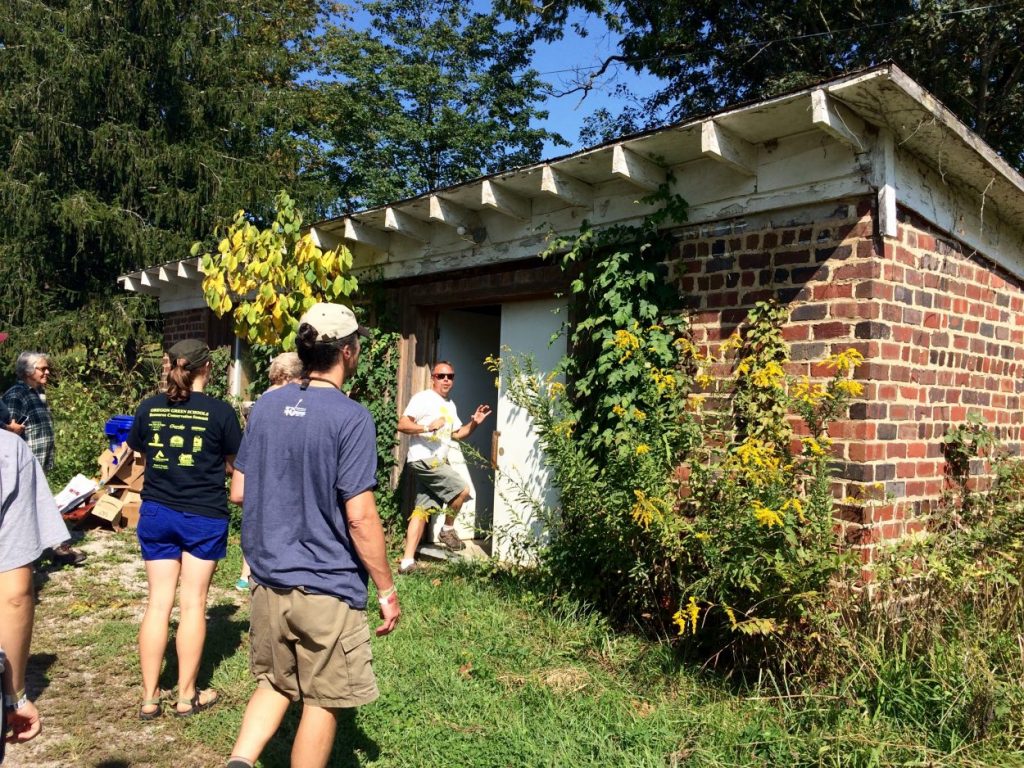 Chris Chmiel taking us into his pawpaw museum.

My last day at the festival ended with one final talk by archaeologist Dr. Paul Patton from Ohio University. He talked about digging up the pawpaw’s past in Ohio. They’d found evidence of Native American seed saving of not only pawpaw seeds, but many others including a native sister to the popular grain, quinoa, called Chenopodium berlandiari or pitseed goosefoot that is related to lamb’s quarters and still grows all around us to this day. He spoke about exploring and embracing all of these native fruits and grains as a way of conserving the land and our resources.

Filled with excitement, hope, and pulp, I finally understood why we have such a special reaction to first hearing about this oddball, tropical tasting, non-tropical fruit. In those moments of wonder, we are reminded that there are still things left to discover on this planet. There are forgotten plants and food sources with so much to offer, living right in the forests we grew up in, just waiting to be explored and brought into the light.

Erin is the Visitors Center Team Leader at Lewis Ginter Botanical Garden. In her spare time she enjoys organic vegetable gardening, comedy, and hunting for pawpaws.