Through the Eye of a Pinhole

Our Nature Connects®: Art with LEGO® Bricks  exhibit has been wildly popular, not just with kids and millennials, but with adults of all ages.  Each age group seems just as excited about it as the next. For young children, often it’s the enormity of the sculpture or the sheer number of bricks used to make it. For millennials, they might just want to “dab” next to the sculpture and post the photo on Instagram. For adults, it might be the pure genius of the engineering feat that intrigues them. … Or,  it might just be the opportunity to capture the image of a LEGO brick sculpture with a LEGO brick pinhole camera. 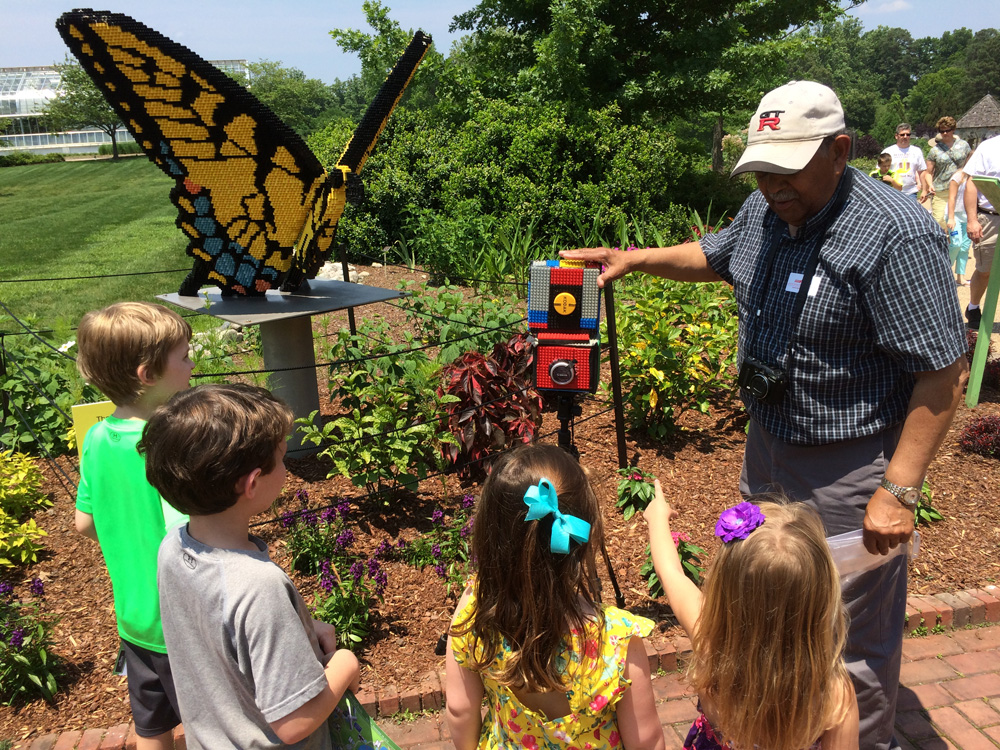 You can see Draper has a way with kids. A flock of them surrounded him to ask questions.

For James Draper Jr., that is the draw. An added bonus was all the excitement it caused among visitors, children in particular, as he was doing it.  For Draper, even though he is just a visitor taking a few photos, answering questions from young inquisitive minds comes naturally. Draper is also a retired teacher from Richmond Public Schools and a community volunteer.  This is not the first time he’s taught kids about pinhole cameras.  He says they make for a great teaching tool because they really spark a child’s imagination of what’s possible and how things work. 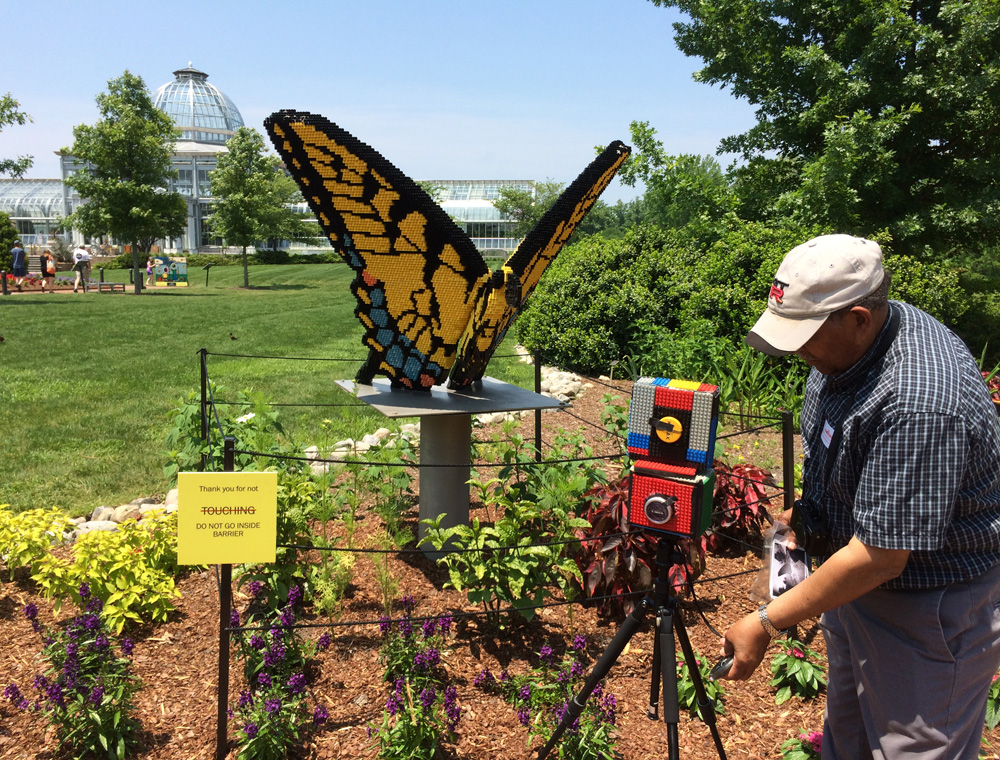 Draper uses a stopwatch to time the exposure for his LEGO brick pinhole camera.

“Introducing kids to the pinhole camera, they become eager to make one, fascinated and inquisitive. Kids are amazed that a shoe box, oatmeal barrel or any box can become a real camera. They are participants in an age of old photo history. Many kids think of pinhole camera as magic,” he says. As Draper points out, it’s not just the kids. “Just as many adults were amazed as were children.” 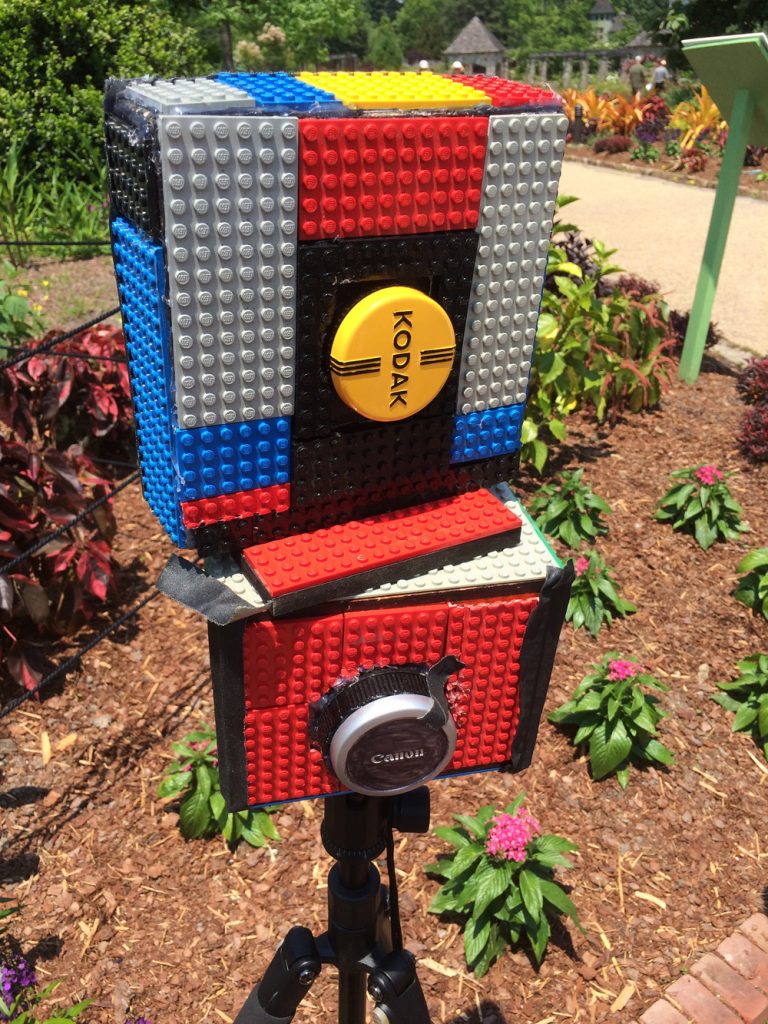 Pinhole cameras are are like stripping down a camera to what it was originally, when they were first invented.  The “negative” used in pinhole cameras is a sheet of photo paper that typically takes a 20-30 second exposure, rather than the hundredth of a second that most modern cameras take.  Draper puts his own spin on his pinhole photography to save a bit of money. He develops the negative and then scans into a personal computer  using a computer program like Photoshop to print “positive” on photo paper in his home printer. He avoids a lot of extra darkroom work and can fit four images per sheet.

“When I read about Lewis Ginter’s Nature Connects Exhibit, I immediately thought of making pinhole exposures with my LEGO pinhole cameras.”  Draper explains that is partially because how to make with a pinhole camera was a major project for his students in Richmond Public School’s Visual Literacy Program.  He chose the subject because it helped students  become more motivated to learn and made learning fun.

Pinhole photography is an art and a science.

You might consider James Draper a pinhole camera expert. He’s exhibited his work and been written about in local media. He’s even got a online presentation covering pretty much anything you might want to know about pinhole photography if you want to learn more.

While he was out there photographing Draper attracted quite a little crowd of the curious. Some people have a way about them that makes them approachable, and you know you can ask them anything and they will do their best to answer. Draper is exactly that way. People know he’s a spring of knowledge just bubbling waiting to be shared with others. You can tell he’s an educator a heart and loves teaching anyone who’s interested.

An elderly couple who was visiting the Garden approached just as the group of children wondered off. You could see the couple was intrigued, and easily struck up a conversation with Draper who happily began teaching them without a second thought.

And I wasn’t surprised a bit that I ran into him the very next day, taking more photos and  sharing his haul of images from the day before with visitors. 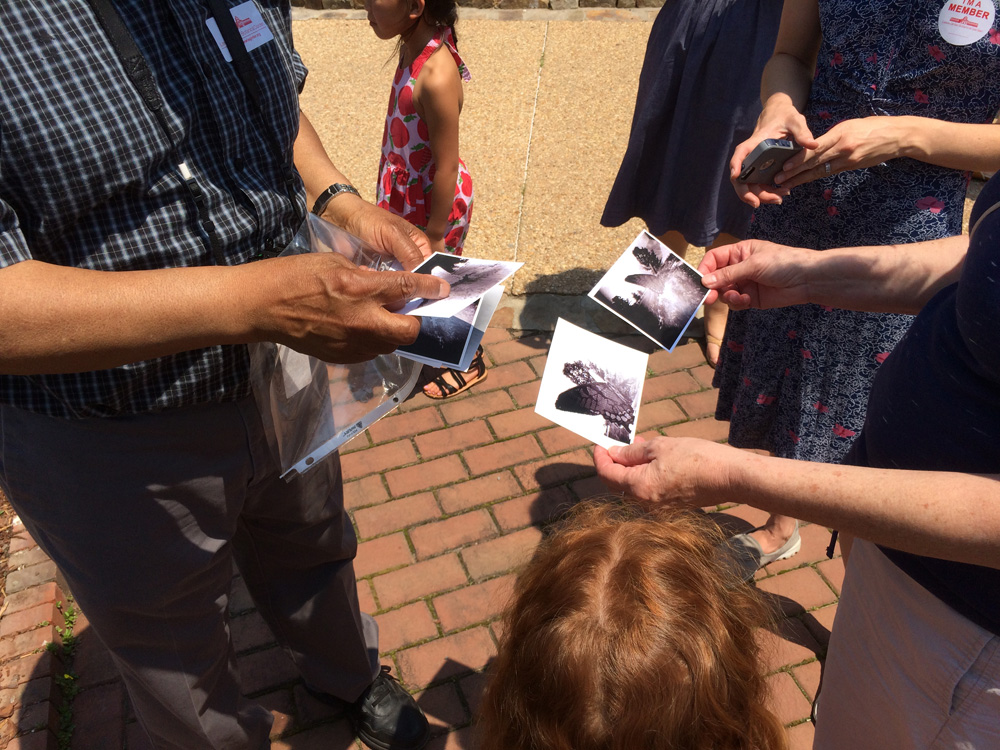