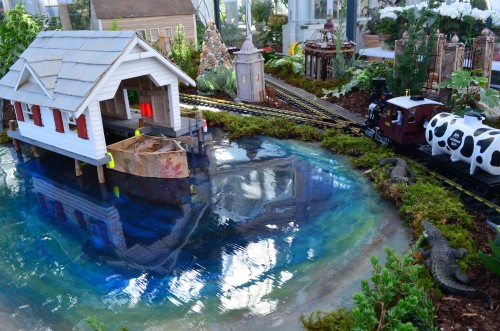 The boathouse and Lakeside Lake.

Shannon Smith is a woman with a vision.  As a senior horticulturist and GardenFest coordinator at Lewis Ginter Botanical Garden, she gets to creatively envision how our 40-acre botanical garden will look with half a million LED lights, embodying a new theme. Each year, Dominion GardenFest of Lights is different. And each year, Smith, along with her GardenFest team, work more than a year in advance to dream what the next GardenFest of Lights will look like.  Then, they make it happen. It is a labor of love and involves thousands of hours from many staff and volunteers.

With the Garden’s deep ties to the start of cycling in Richmond and with the World Road Cycling Championships, Richmond 2015, arriving in September — cycling, and the Garden’s history were a natural fit. A Legacy in Lights: 120 Years from Bicycle Club to Botanical Garden bridges the two in a rather fabulous way, plus helps celebrate the Garden’s 30th anniversary this year.   Many don’t know that the Garden’s historic Bloemendaal House was once the social hub for cycling in Richmond.  Ginter also had ties to many buildings in Richmond. He built the Jefferson Hotel, gave land for the building of the Union Theological Seminary, created Ginter Park, even paved Brook Road with his own funds.

“We knew we wanted to do a historic Richmond landmark theme for this year’s North Wing train display,” Shannon Smith explains.  “We tried to pick Richmond landmarks that had a tie to [the man] Lewis Ginter in some way. For example, the Commonwealth Club, it’s not a recognizable building for most people, but it is one of our great historic landmarks. It was Lewis Ginter’s membership at the Commonwealth Club and the friends he made there that made the Lakeside Wheel Club a reality. They wanted a place to ride their bikes.”

And so, the Commonwealth Club, along with the Jefferson Hotel, St. John’s Church, Hollywood Cemetery, and many other historic Richmond landmarks with ties to Lewis Ginter (or not) create the centerpiece of the display in the Conservatory this year. One of the most interesting pieces is a replica of the Lakeside Park Menagerie/Zoo, from 1896-1897, including a bear pit, monkey house and lion’s cage. Did you know that the cage for the bear pit still exists?!  Each landmark was crafted by hand from dried botanicals grown here at Lewis Ginter Botanical Garden.  And each building is a piece of art created by our talented horticulturists, volunteers, and other Garden staff who have a creative flair. Enjoy the photos, reading about the connection each piece has to Lewis Ginter, what botanicals each work of art is made from, and who made it. Then, come visit these beauties in person, because the photos just can’t do them justice.  The display runs November 28, 2014 – January 12, 2015 (closed December 24-25). 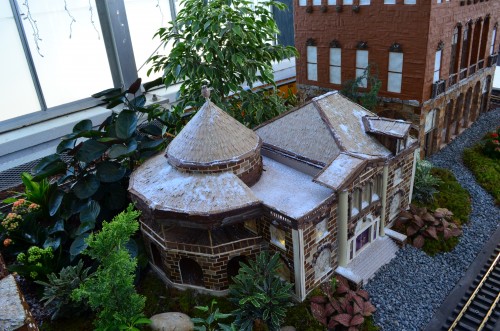 The design is an early example of the Colonial Revival. The facade is unusually massed: the entrance pavilion is flanked by identical wings, but the roof and a large circular bay are asymmetrical. This free composition is more directly related to the earlier Shingle Style than to the later, tamer Colonial Revival. The materials and colors of the club–red brick, red-orange terracotta, and brownstone, relate it to the Romanesque Style of the 1880’s. The Commonwealth Club is still in operation as a private club.  It is a landmark building on the 400 block of Franklin Street, itself a Virginia Landmark District.  Source:  Virginia Landmarks Register 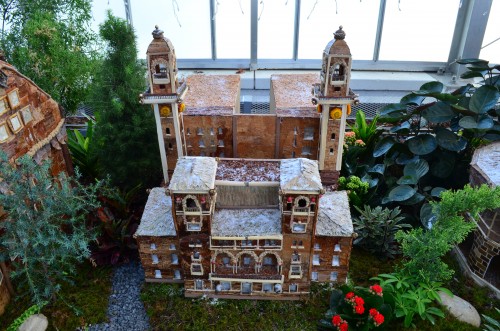 The Jefferson Hotel, completed in 1895, is a massive yet graceful structure of buff brick and stone. Typical of the work of Carrere and Hastings, it is an effective blend of many architectural forms and styles, although the exterior is composed chiefly of Italian and Spanish Renaissance elements. The four towers rising from the main block with its imposing entrances, loggia, varied window forms, and wealth of rich architectural ornament make the structure an important Richmond landmark, Although gutted by fire in 1901, the exterior, for the most part, survives as originally designed. Source:  Virginia Historic Landmarks Register

Lewis Ginter’s connection: Lewis Ginter’s determined vision to build a first-class hotel in the city of Richmond led to the creation of one of its most famous landmarks.  He worked with the architects to bring to life a grand hotel based on his experiences visiting the world’s great capitals.  He was the primary financer, principal owner, and supervised the construction of the hotel, which opened in 1895 with a glittering reception. The hotel today is a 5-star-rated attraction. 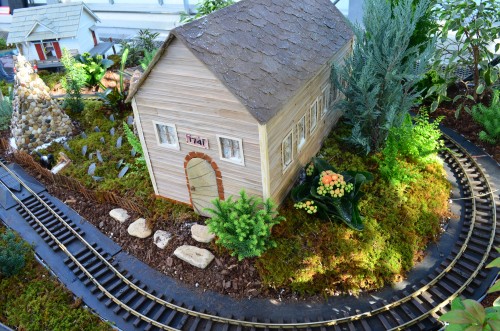 St. John’s Church was the first church built in the city of Richmond and was completed in 1741. The graveyard is the site of the first public cemetery in Richmond. Many persons who made contributions to the history of Richmond and Virginia are buried here, such as: George Wythe, signer of the Declaration of Independence and teacher of law to Thomas Jefferson, Chief Justice John Marshall, and Henry Clay; John Page and James Wood, Governors of Virginia; Elizabeth Arnold Poe, mother of Edgar Allan Poe; and Dr. James McClurg, a Virginia delegate to the Constitutional Convention of 1787.

St. John’s Church became famous when over 100 Virginia colonial leaders, including Patrick Henry, George Washington, Thomas Jefferson, Richard Henry Lee, and Peyton Randolph met here in March of 1775 for the Second Virginia Convention. Patrick Henry’s famous “Give me Liberty or Give me Death” speech was delivered on 23 March 1775 inside the church. Henry’s timely resolutions passed by a narrow margin and the American Revolution began the following month when shots were fired at Lexington and Concord. The church is an active ministry.  Recreations of Patrick Henry’s famous speech are held during the summer months. Source: St. John’s Church Foundation

Trim around door and top of roof – Bamboo leaves 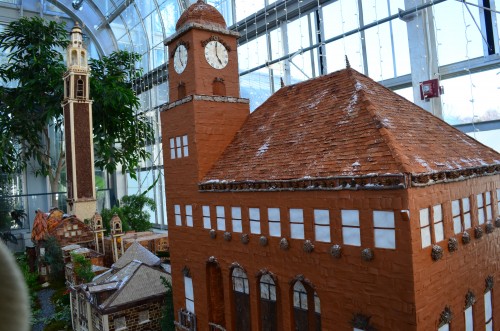 Main Street Station marked the crossroads for the then major north-south railroad, the Seaboard Air Line, and one of the principal east-west lines, the Chesapeake and Ohio. The design of the building was by the Philadelphia firm of Wilson, Harris and Richards. From the day it was opened, the station was regarded as one of Richmond’s most renowned buildings, as well as a prestigious ornament for the city. Architecturally, Main Street Station ranks as an excellent example of the influence of the French Ecole des Beaux Arts on American building. Source: Virginia Historic Landmarks Register

Lewis Ginter’s connection:  In 1873 Ginter become a major shareholder and director of the Richmond Locomotive & Machine Works.  Though he died in 1897, Ginter was an early adopter and developer of mass transportation, including the City of Richmond’s first trolley system.

Reflecting the patriotic fervor of the time, the Virginia War Memorial Carillon is the sole structure erected by the Commonwealth of Virginia to memorialize the “patriotism and valor of the soldiers, sailors, marines, and women from Virginia” who served in World War I. The concept, design and commission of the memorial were highly influenced by public opinion, and resulting political acts. Although a commission to study a design and site for the memorial was formed as early as 1922, political maneuvering and public campaigns altered the initial design and delayed its dedication until 1932. The building exhibits one of the firm’s most opulent examples of the Georgian style, which was chosen expressly because the “Commonwealth of Virginia is the Great Southern exponent of that noble Colonial architecture which has such distinction and essential American quality.” Source:  Virginia Historic Landmarks Register.

Originally named Mount Vernon Cemetery, Hollywood was first planned in 1847 when a group of Richmond business leaders formed a stock company to develop a “rural decorated cemetery” for their city. The charter was not approved until 1856 because so much friction has been engendered by adjoining property owners and others who feared adverse effects from the burying ground. By 1860 Hollywood Cemetery was secure in the Richmond scene and was fast becoming the principal and most fashionable burying spot in the city

The fascinating array of 19th century tombstones and memorials are an added feature of the Cemetery. Hollywood has been the scene of many interments of famous Virginians including President James Monroe. Source: The Virginia Historic Landmarks Register 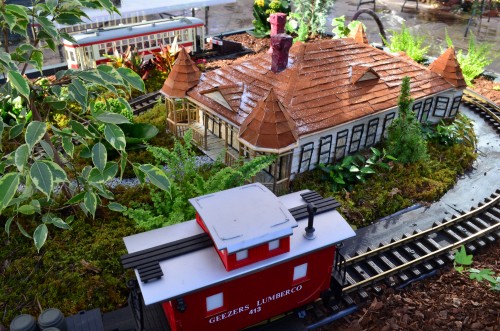 The Lakeside Wheel Club – a reproduction of Richmond’s cycling center the late 1800s. This is the same building as Bloemendaal House — now two stories tall.

Lewis Ginter’s connection:  Members of the Commonwealth Club and Westmoreland Club approached fellow member and businessman Lewis Ginter to provide a destination outside the city where “wheelmen,” or bicycle enthusiasts, could rendezvous after a good ride.  Ginter built a clubhouse on the nine acres he owned beside a lake north of town, which opened in 1895.  Lewis Ginter died in 1897.  By 1901 the bicycle craze had cooled.  Ginter’s niece Grace Arents purchased the clubhouse and 9 acres from her uncle’s estate.  The building then served as The Lakeside Sanatorium for Babies.  Later, with a second floor added and a reconfigured interior, the renamed Bloemendaal Farm served as home to Grace Arents until her death in 1926. 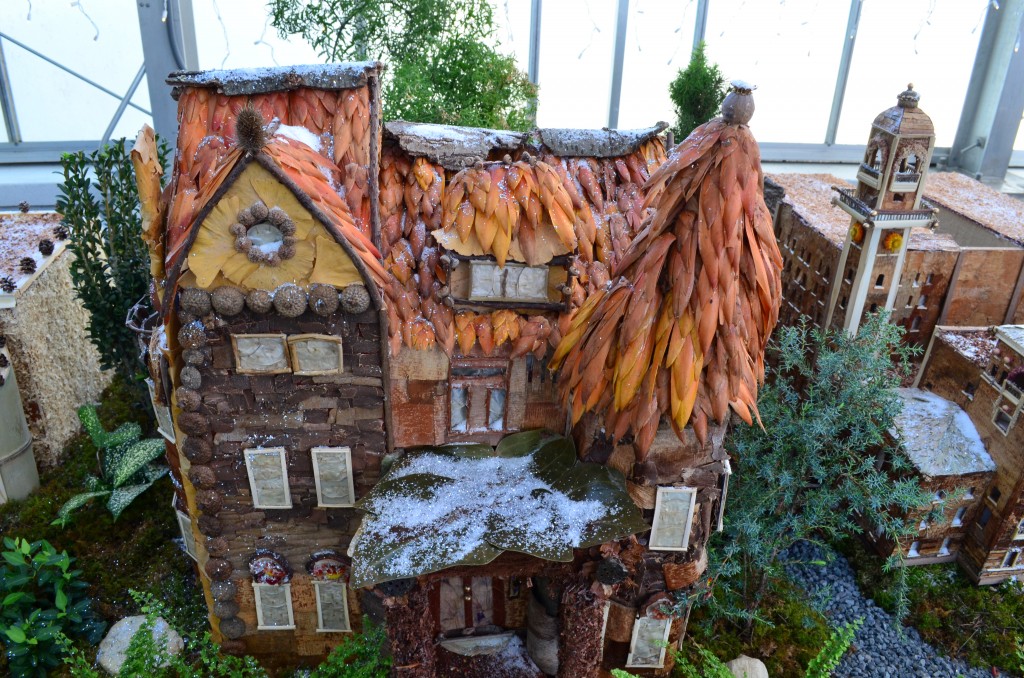 Built in the Romanesque Revival style, the Ginter House reflects the Victorian affinity for the natural world, but has a more masculine feel than typical period style.  Standing at the intersection of Franklin and Shafer Streets, the Ginter House effectively has two façades.  The home is three and a half stories tall and the façade is brick and brownstone with a complex gable Spanish tile roof.  The interior is decorated with art glass windows and elaborate woodwork.  Much of the décor is in the Arts and Crafts Style.  The residence cost approximately $125,000 to build, which was said to be the most expensive residence ever built in Richmond at that time.

On February 9, 1892, upon the home’s completion, Lewis Ginter threw an elaborate reception for 500 of Richmond’s most notable and well-to-do citizens.

Lewis Ginter’s connection: This mansion was built as Lewis Ginter’s primary residence.  When he died in 1897 the house was left to his niece, Grace Arents, who sold the house in 1920. In the mid-1920’s it was occupied by the Richmond Public Library and today it is owned by Virginia Commonwealth University. 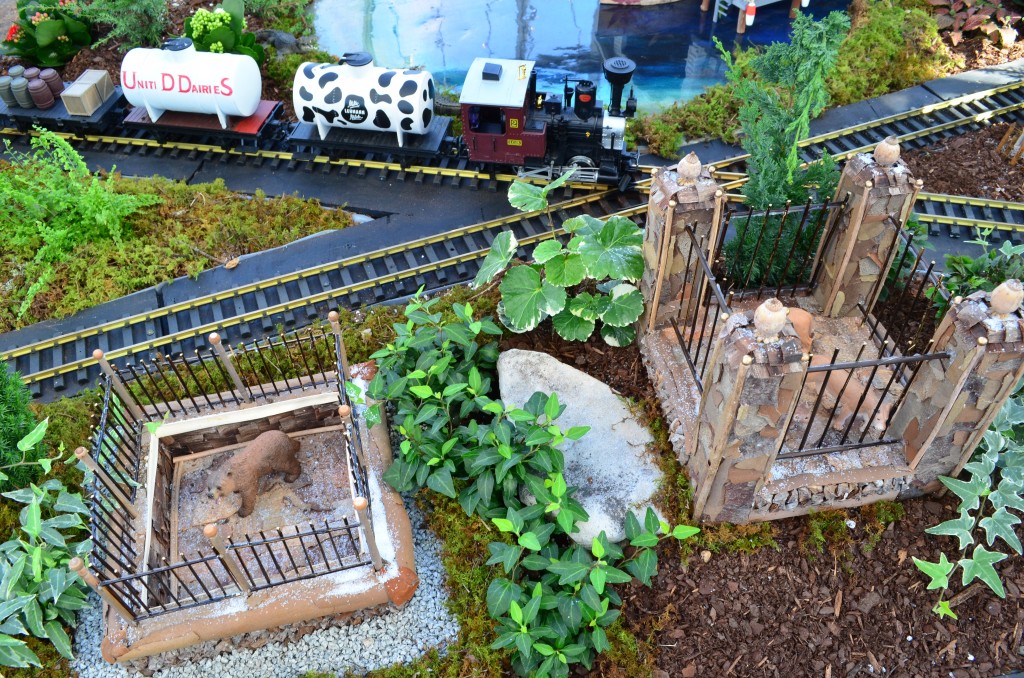 Lewis Ginter’s connection: Lewis Ginter financed the construction of Lakeside Park, which opened to the public on March 15, 1896.  The park included a fishing lake, a man-made island, a boathouse with rowboats and a Naphtha Launch (an early motor boat), bicycle track, café, billiards, bowling alley, hedge maze and dance hall. As one of the special features of the park, an agent of Lewis Ginter, Anton H. Theirman, traveled the globe and collected a large “menagerie” of animals.

At its height, the menagerie included crocodiles, bears, lions, wildcats, a spotted leopard, white cougars, ocelots, badgers, coyotes, wolves, eagles, a 40-foot-tall Monkey House containing over 12 monkeys, and “tame” raccoons (including one named “Jefferson” who was free to play with the guests).

In March, 1909, the animals of Lakeside Park’s Zoo were sold to other gardens around the country including the Smithsonian Institution for their zoological garden. 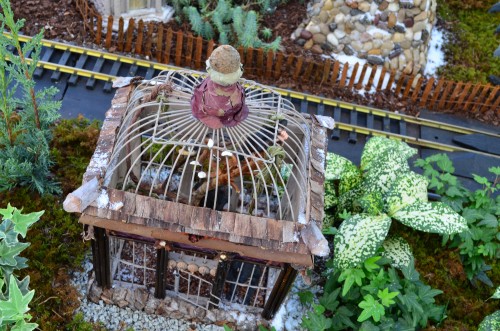