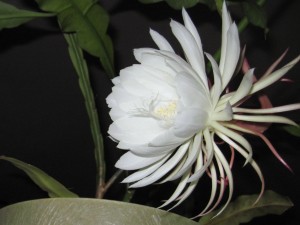 When is the last time you stopped to watch a flower open? We are all so wired with electronics today and have access to see photos and movies on the Internet.  Still, to experience a bloom unfolding in front of you in the natural world affords an inexplicable sense of pleasure and wonder.

Recently, my daughter Margaret and I went to Lewis Ginter Botanical Garden as we have on many of her visits back to Richmond in the past 15 years. We saw the Butterflies LIVE!  exhibit and explored the Conservatory. One of the plants, a night blooming cereus (Epiphyllum oxypetalum), was of special interest to us. It is a tall, rangy plant in the far back right-hand-side of the North Wing of the Conservatory with multiple buds attached to its cactus-like leaves that will soon develop into unbelievably showy blossoms.

Our family had a special tradition involving this plant, as did numerous other groups throughout the South. My grandmother (also Mabel) was a plant person even though she did not have her own garden at that time. She had brought this one plant to our home when she came to live with us. When the buds began to swell, she would examine them daily to predict the opening.  I would wonder how this ugly bud, which reminded me of a plucked chicken’s neck, would become the spectacular flower that I remembered from the previous year  — you see it only blooms once a year. 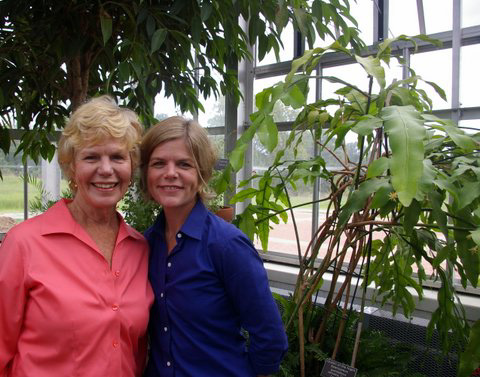 Much preparation would begin in anticipation of the opening event. The screen porch would be dusted and chairs wiped down, the ceiling fan checked out and the squeak in the red sofa glider oiled. On the morning of the big day, my grandmother would call her gardening friends, whom my father thought to be hopelessly boring. This opinion was fueled by the fact that they talked mainly about plants and didn’t imbibe in strong drink, but had some sort of ginger-ale punch with a floating ice ring in the middle. Even non-plant persons were amazed when these flowers opened, usually after 9:30 at night. The interior of the blossom reminded me of a wedding procession in a great white sanctuary.

The family legacy of a love of this bloom continues. My daughter Margaret has written a play, Night Blooms, which uses the setting of such a Bloom Party in Selma, Alabama in 1965 on the night of Martin Luther King Jr.’s Civil Rights March. It was a momentous event in our little town’s history, and indeed that of our whole country. Using humor and poignant dialogue among the seven memorable characters, the play brings alive the generational and cultural conflicts of the two families involved.  Night Blooms, by Margaret Baldwin, will be the opening play of the 2012 Signature Season of Virginia Repertory Theater (formerly Barksdale) in Richmond,  opening September 28 and running through October 21.

In the 1930’s in Jackson, Mississippi, The Night Blooming Cereus Club was formed by Eudora Welty and her artistic friends, many of whom were also writers.  This tongue-in-cheek group’s motto was “Don’t take it too cereus. Life’s too mysterious”.  One of the group, Hubert Creekmore, described the party to watch the spectacle of the opening of the flower.  “We’d sit mesmerized, as the bud trembled and shuddered while it unwound its long slender white petals and spread them before our incredulous eyes as a delicately incised saucer full of froth” (One Writer’s Garden, p. 105)

Often it was announced in the local paper that the blooms were expected to open the following night, inviting people to come and see the spectacle. Many friends have shared stories similar to my childhood experiences. Continuing the tradition to date in our own family are two nieces with inherited night blooming cereus plants, hence the lovely photograph of the bloom above.  Maybe one of them will video a bloom opening so I can see it again! Until then I may have to settle for the experience of the opening of my neighbor’s moonvine buds.

Note:  Mabel Baldwin has been a volunteer at Lewis Ginter Botanical Garden since the mid 1980’s.  She worked with the Monday Seed group in the old green house with some of the ladies that were instrumental in starting the Garden.   As a charter member the Bloemendaal Society, the Garden’s volunteer organization, she went on to be President of that group in 1991,  the year the first  plant sale.    The Gillette Forum Committee, concentrating on landscape design, was her primary focus for volunteering for the next 20 years, planning garden tours and speaker programs.   Mabel continues to volunteer as a  Garden Guide, which she says, “keeps her learning about plants and being around real gardeners.”  It also frees her to travel with her husband Bill.  They have two married daughters and two grandsons who live in Atlanta.