When I was growing up, spring break family vacations were often built around road trips that my parents planned to places none of us had seen before.  A road trip was literally the experience of seeing new territory from the back seat of a diesel Mercedes 220D.  It was like driving through the countryside in the bow of a Panzer 38: built for dependability and hardly for comfort.  We passed through many towns, motored many mountains and spied several waterways.  We saw things.  But due to a lack of time, we saw things quickly and returned back home.  My dad rarely had extended time for vacations.  He owned a retail store that required his presence, so when he could take time, we would take off, at a rabbit’s pace, and return in a leap.

I enjoyed our vacations, but I often wondered what it would be like to stop in those places we saw, to just live and be still in them for a while.  How would it feel?  What would I hear?  What would I eat?  Many of the very best meals are discovered from asking local residents for restaurant recommendations and then exploring the foods that are specific to each region.   That is something we did not always have time for.  We had places to go.

During my most recent trip to the Lewis Ginter Children’s Garden, I wove my way between the planters, through the gate, around the circular path, under the dogwood, through the tunnel and back around, and noted some of the changes that had occurred since last week around this time. 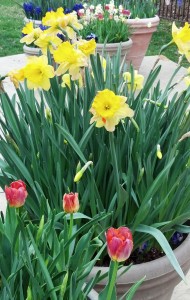 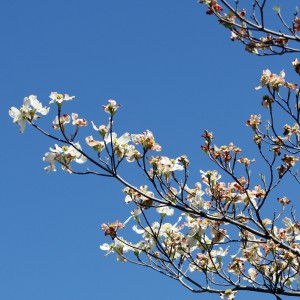 I stopped to rest at the bench by the lake.  That’s when I started to hear things.  It sounded like this.  To my surprise, I was being watched.  Actually it felt more like I was being studied by one of the Garden residents, one of the locals. 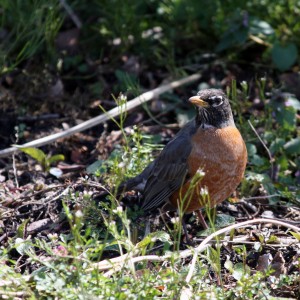 I recognized his type.  He was a red-breasted robin, the kind of bird you see in most towns in North America.  What I could not be sure of was whether he was a year-round resident or a newcomer.  While some robins remain in the garden throughout the winter, others migrate to warmer places and return as the weather warms for spring.  Perhaps this was his story.  Many call the American Robin a Harbinger of Spring because of this migration.  His arrival to the garden serves as a proclamation, saying, “Spring is here!”  Many Native American stories are woven about wildlife and are created to honor the importance of the creatures in our world.  I found a Native American story about how the robin earned his title and am happy to share this tale with you.

I continued to watch the robin watching me.  Apparently he was also watching for worms, bugs, caterpillars, and such.  Periodically, he would leap to the earth for a snack and return to his study.  I learned that later in the season he will be looking for fruits and berries as they become available.  I also learned that robins hunt their food by sight, which gives me a new perspective on ‘watching what you eat’.

This year we can all watch what we eat as we follow the progress of all that is planted in the Lewis Ginter vegetable garden.  And I will begin to watch what I eat as I anticipate summer’s approach and how I will soon be pulling on bathing suits when I go on vacation.

I was satisfied that I could take some time to watch the birds at Lewis Ginter.  New flocks are arriving daily, some as new residents and some as migrants.  Perhaps the ones just passing through will pause long enough to enjoy the garden and fill up on some of the local food.  Perhaps I will do the same.  I hear the Garden Cafe and the Robins Tea House serve a delicious roasted red pepper and crab bisque!

― Shel Silverstein, Where the Sidewalk Ends