The Garden Celebrates Hugh Rooney as Volunteer of the Month

It was a really cold day! As the Garden’s spring PR & Marketing Intern, I was excited to start on one of my first writing assignments.  I headed over to the Robins Visitor Center to meet Hugh Rooney, the Garden’s volunteer of the month.  Rooney was waiting for me just outside the Garden Café and he greeted me with a cold handshake — still thawing out, but a very warm smile. He invited me over to sit, resting his half-empty cup of coffee on the table. I asked him how he came to volunteer at Lewis Ginter and he began to share with me his past volunteer trek and quickly caught me up-to-date about his current volunteer services.  Rooney’s  a great storyteller and there was something about him that made me feel at ease and engaged as he detailed some of the time lines of his life’s work.
It was 3 p.m. when we started talking and he had been working since 9 a.m., outside in the cold.  He explained that his  intentions were work ’til noon,  have lunch at the café and leave for home. I surmised from our conversation that somewhere out in the Garden his plans must have been thwarted.  He was still here, 3 hours after his intended departure chatting with me patiently and apparently in no hurry. We often make plans but then life has a way of redirecting our plans. Rooney seemed to expect that when he works at the Garden.  That happens a lot, he says,   “I come with a set time in my mind to work in the Garden, but time gets away from me and before I know it, noon turns to 1, then 2, then 3 and here I am.”  Rooney confirmed with a genteel smile that when you’re enjoying whatever you’re doing it’s easy to get “caught up” — it really doesn’t seem like work at all. 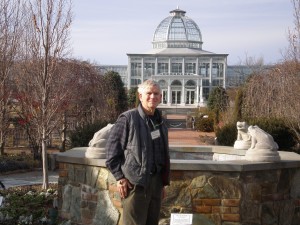 Volunteer of the Month Hugh Rooney in front of the Conservatory

Rooney explained he’s been a member of the Garden since … well a long time. While trying to recall exactly the year he and his wife became Garden members, he began to reminisce in the moment about how much time has passed since then.  Rooney’s wife also volunteers at the Garden in the greenhouse.  Rooney is a retired biology Professor who taught at J. Sargeant Reynolds Community College.  He told me he  had wanted to commit to volunteering years before he did, but that his career and other responsibilities never gave him that time he needed to do so. He took a sabbatical one semester and decided to look around for volunteer interests.  He decided to pursue his Master Gardener certification (something he’d wanted to do for a long time), and at the same time he also helped with the plant clinic at the Ashland Farmer’s Market. Not long after, he committed as a Garden volunteer. Rooney remembers the constant pull he felt to the Garden when he was still teaching at Reynolds and recalls with an “Oh, yeah, I would bring my students here every year to tour the Gardens.”

Upon his retirement, in 2003, he began to volunteer at the Garden on a regular basis. “It is a good fit here. I was already interested in gardening and my biology background gave me some similar interests when I’d work with the gardeners and horticulturalists.”

He talked about his interests in specific places in the Garden, like the Flagler Pavilion. Flagler was just under construction when he joined the volunteer team and he was asked to work on the project. With a noticeable glint in his eyes, he talked lovingly and eagerly about working on the Flagler Garden project and remembered that at one point Syndor Lake wasn’t here.

“I’ve seen the property really transform and expand. It’s exciting to see and it keeps me looking forward to next projects.”  Rooney continues to volunteer each Wednesday in Flagler Garden.

You’ll see more of Hugh Rooney starting in May as he starts work as a key volunteer for the Patrick Dougherty MeadowMorphosis stick sculpture installation.

If you ask him what his favorite volunteer experiences are when he works, he’ll say he likes them all. But a favorite for sure is giving guests tours of the Garden. “Garden tours keep me sharp. You have to know what you’re talking about when you’re a tour guide,” he said.

Each year Rooney works to get ready for the fall and spring plant sales at the Garden. He works wherever he is needed and is ready to assist with projects that are pushing tight deadlines. He serves on the educational committee and helps decide things like, the best spot for a greenhouse. “He said, You know you just can’t put a greenhouse anywhere. You have to think about the location of the sun.”

Rooney works faithfully because of his love for the Garden and the people here.  Many, like Rooney are here because they have a deep-rooted desire for volunteerism and helping others,  not accolades. Even so, volunteers are recognized for their service for the Garden as well as the communities they serve when volunteering. In addition to the regular Garden volunteer perks , Rooney is honored with the title of Volunteer of the month, a highly coveted prime parking space, a $25 gift certificate and he’ll be featured in the Garden volunteer newsletter touting volunteer service hours and years of membership.   Thank you Hugh Rooney — the Garden wouldn’t be here without you and your 500+ volunteer comrades!