As I was walking through the Spring Plant Sale a few months back, I met a man by the name of Dick Elcock. Some of you that have been around the Garden for a while may know him, I did not. 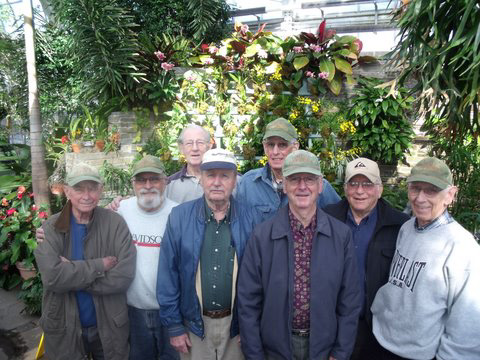 I was telling Dick about how I would like to purchase some flowers, that my backyard has more shade than light, and that I’m a beginner gardener still having some troubles with ferns, when Dick Abbott walked up. Without hesitation, Dick [Elcock] said, “Here. Meet this geezer, Dick [Abbott]!” After letting out a cackle of a laugh and shaking the new Dick’s hand, I thought to myself — did he just refer to this man as a geezer? Though I wasn’t able to muster up the courage to ask about the “geezer” reference, I quickly learned that there was, in fact, a group at the Garden called “The Ginter Geezers.” And I was among two of them. The Dick’s told me about their projects over the years and added that their [the Geezers] wives encouraged their involvement at the Garden because it gave them something to do that they enjoyed. As our conversation wound down, I mentioned an interest in meeting the rest of the group. Dick [Elcock] agreed and Dick [Abbott] told me he’d bring along their resume. Oh, I know I’m going to like these guys…

I had originally set an appointment to meet with the Geezers weeks ago, but I came down with a cold and wasn’t able to make our appointment. It was two weeks later when I was finally able to catch up to them. I knew I was in the right place when I was greeted with, “You’re the girl that never showed…” After, they graciously accepted my apology and explanation, we coordinated a new meeting time – let me tell you, I wasn’t going to miss or be late to this one. Not even by a minute. And as anticipated, I walked into the Hort fort [where many of their projects begin] and Rex Dazey glanced at his watch and said it’s 1:30 exactly — right on time.

They come to the Garden every Tuesday and work for about 6 hours. They’re sharp, quick-witted, and there isn’t a bashful one in the bunch. Their current project is a series of Versailles boxes, which the Garden will use for its annual Gala, Splendor Under Glass. Geezer projects have ranged from pressure washing to setting up the train in the Conservatory for the Christmas display to dissembling, moving, and building greenhouses. Actually, they’ve completed three greenhouses and assure me it’s no easy task. They became a group about 12 years ago when a member donated a greenhouse to the Garden and volunteers were recruited to move it here.  Dick [Abbott] explained that though they began 12 years ago, it wasn’t until about 8 years ago that they started coming to the Garden weekly and, that they were dubbed  “Geezers”  by Dr. Greg Halloran, who is deceased and greatly missed by the group. They recall two other deceased “Geezers” [Ed Black & Gordon Bruce] and as if we were cued to it, I experience a subtle moment of silence with them.

It’s not all too often you experience a close-knit group like this. I commented that based on their looks, quick wit, and physical abilities, they must be in their late 60s — and they all laughed in unison. They never did tell me their ages, but they did say that the Garden is “good therapy” for them. I imagine this means that it keeps them active, resourceful, and provides them with a sense of purpose & lifelong friends. When I asked them if they enjoyed being able to see their projects strewn about and used in the Garden, they collectively answered that they enjoy being able to provide a service to the Garden that may not have otherwise been feasible. And their pride shines through as they add that there’s nothing like being able to witness their efforts in such a beautiful place.

Oh, I almost forgot. Remember when I met Dick [Elcock] at the plant sale and told him about my gardening difficulties. He ever so politely told me to stick with ferns. I think this was his way of telling me to take my time to master the basics before moving on to the next. It’s now two months later and I have a thriving fern in my backyard! I’ve put it in a place where I can see it from my kitchen window and each time I look at it, I feel accomplished and proud. This must be what it feels like to be a Ginter Geezer…