October is American Archives Month and to celebrate, I’ve poked around in the Garden’s Archives to find interesting things for you.

On April 16, 1987, the Garden celebrated its first Arbor Day by planting a Darlington oak (Quercus hemisphaerica ‘Darlington’).  Jeannie Baliles was the honorary chairman of the celebration.

Here’s a photo of her doing her part to plant the 20-foot tall tree.  She had a little help from a local landscaper! 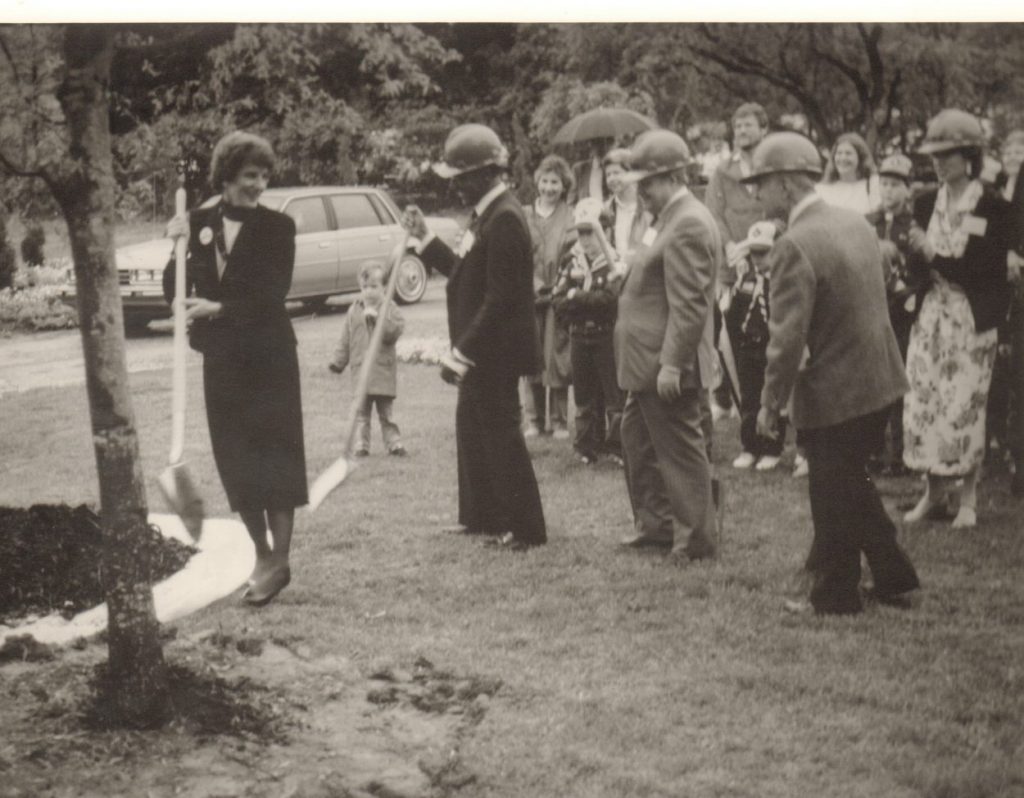 A reporter from the Henrico County Line was there to make a record of the day: 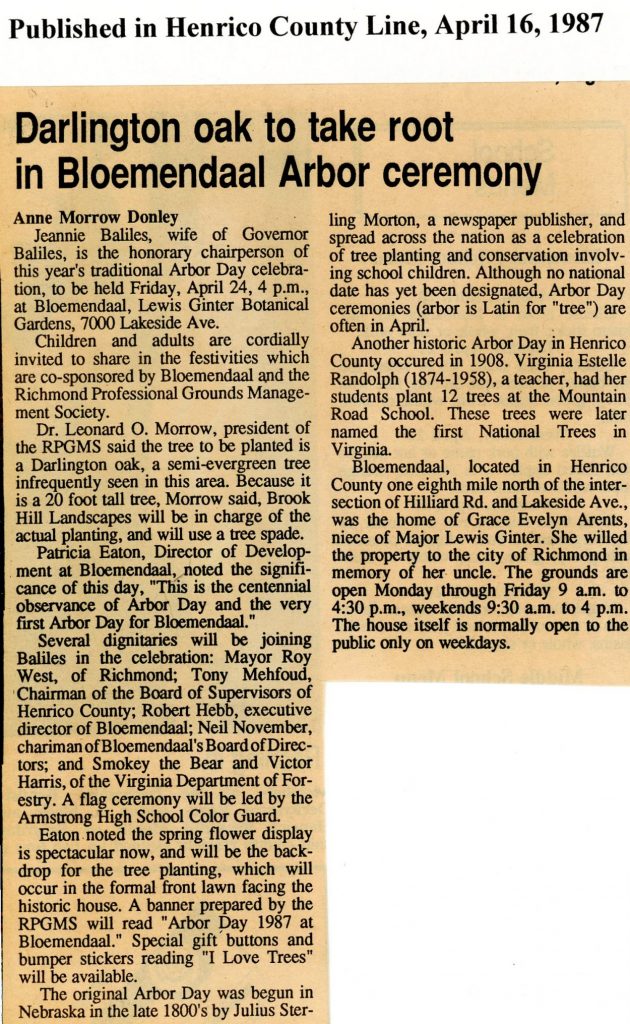 We love our Darlington oak, now grown into an impressive specimen filling one of the corners of the Grace Arents Garden. Here’s the oak now, on a bright summer day.  Quite a change from its first day at the Garden back in 1987. 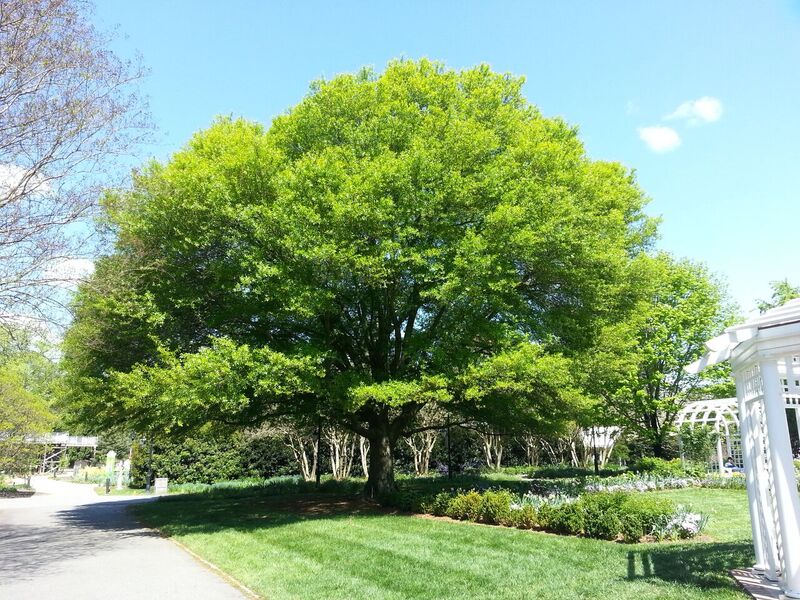 Later this same year, in October of 1987, a master plan for the Garden was unveiled.  Then Director Robert Hebb and the Board of Directors had spent several years developing the plan, working with the firm Environment Planning and Design from Pittsburgh.  Hebb and the directors hoped to create a “major botanical garden that will be among the top 10 in the world.” A dream to be one of the top gardens was not soon forgotten, but more on that in a minute.

Again the Henrico County Line covered this announcement in its Oct. 15, 1987 issue. 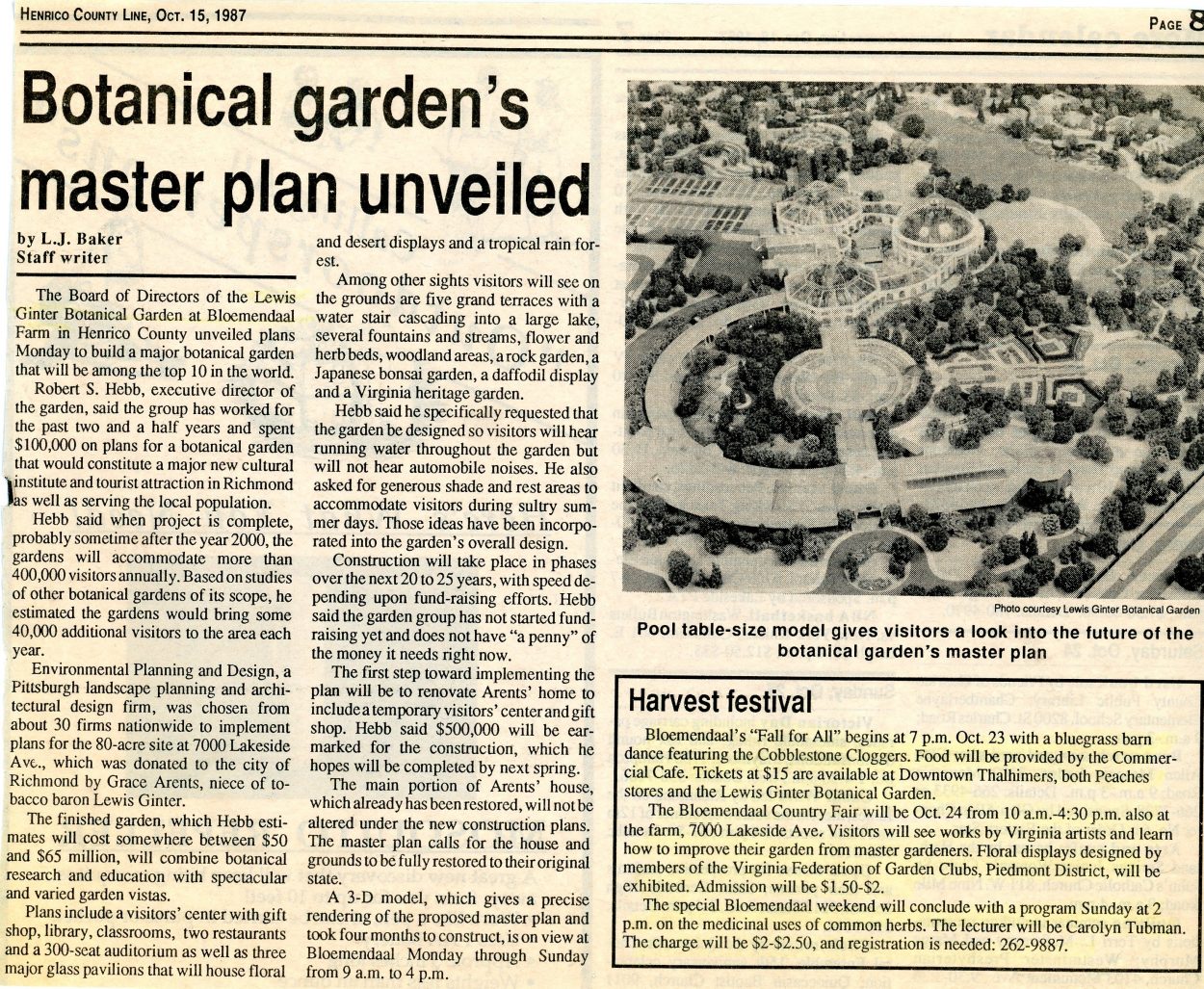 Plans called for three glass pavilions housing tropical and desert displays, grand terraces, woodland areas and a rock garden, a daffodil display and a Virginia heritage garden. Hebb specifically wanted their to be generous shade and rest areas to accommodate visitors on the sultry summer days.

The plan seen here was scaled back in the early 1990s, as fiscal realities were acknowledged, and early ambitions were tempered a bit.

While we might not have the full garden plan pictured in the story above, we do offer generous shade, plenty of daffodils, and a fantastic Conservatory. And Lewis Ginter Botanical Garden has also won a few notable awards. We were even voted one of the top gardens — a top 10 botanical garden by readers of USAToday, and this year we were voted one of the the Most Beautiful Botanical Gardens in the U.S. by Conde Nast Traveler. We may not have realized the dream to be a top 10 botanical in the world (yet), but being named one of the top gardens in the country is quite an honor indeed.