When spring arrives at the garden, the phones start ringing with calls from hopeful visitors asking when the tulips are expected to bloom this year. We try our best to make predictions, asking horticulturists for their most informed estimations and watching patiently as the early varieties start to open up in small numbers.  And then seemingly all of a sudden, as if they had all discussed their joint arrival the night before, the Central Garden springs into bloom sporting deep purple hyacinths, sunny yellow daffodils, and of course an array of tulips ranging from pale pinks to bold vibrant reds. 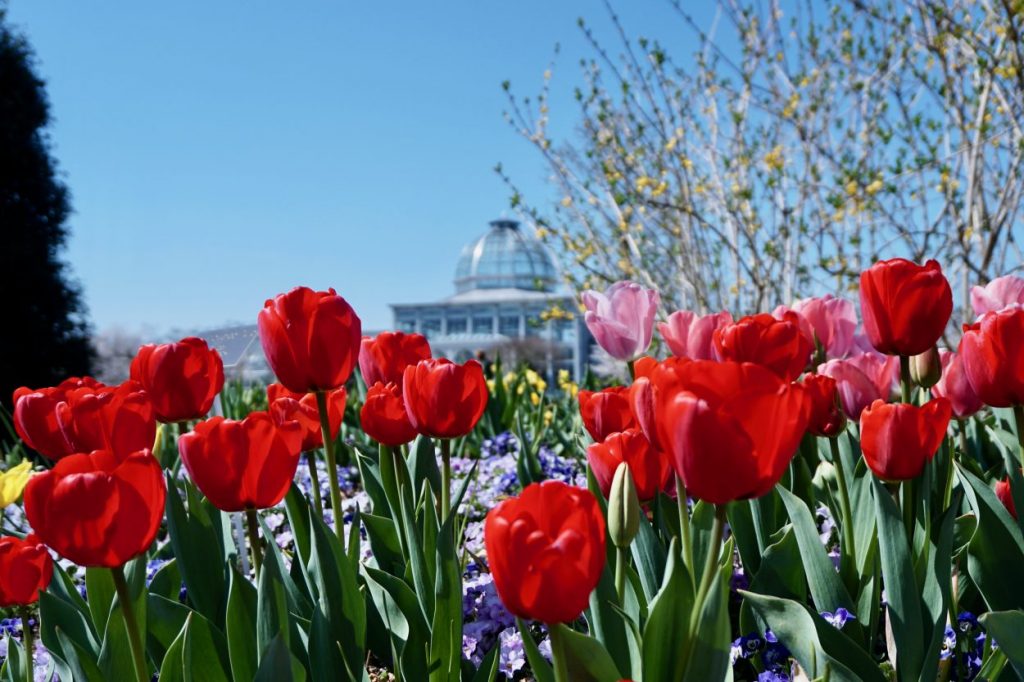 Tulips, Tulipa ‘Come-Back’, give the Conservatory a spring greeting.

Tulip bulbs are planted in the fall because they must be exposed to cold temperatures for three to four months in order to bloom. They are a gift that gardeners give to their future selves, knowing that after the cold winter months they will crave the beaming jolly flowers.  Walking through the lively abundance of tulips and spring blooms in the Central Garden it is easy to see why they are such anticipated flowers.  Novelist Elizabeth von Arnim said it best in her 19th-century novel, “Elizabeth and her German Garden,” “I love tulips better than any other spring flower . . . I have heard them called bold and flaunting, but to me, they seem modest grace itself, only always on the alert to enjoy life as much as they can and not afraid of looking the sun or anything else above them in the face.” 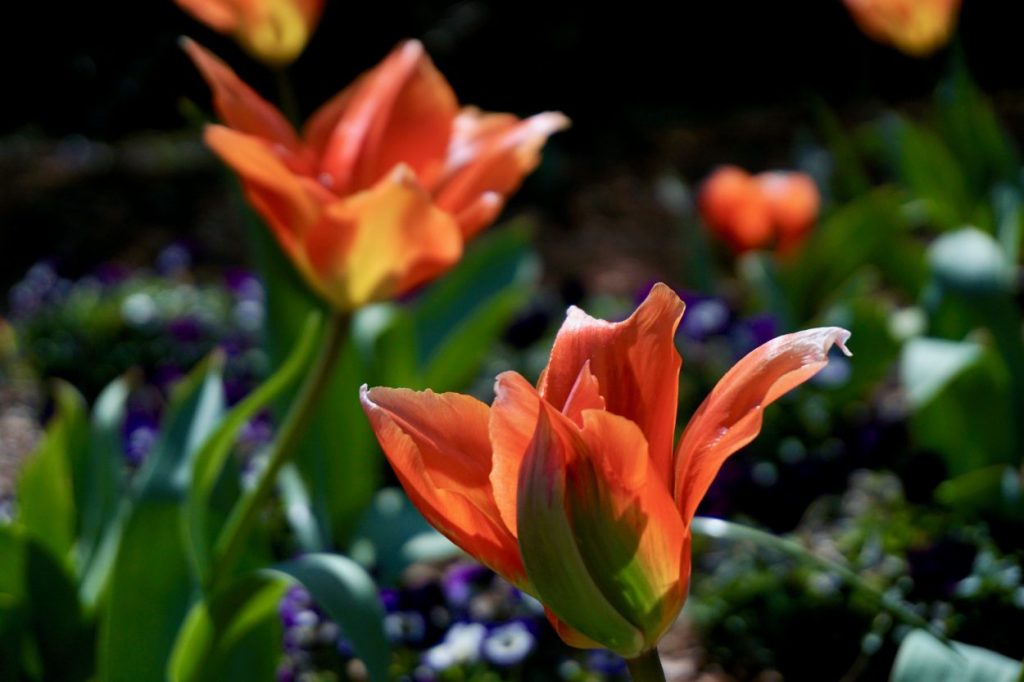 Tulips, Tulipa ‘Apricot Beauty’, look the sun in the face.

While nowadays tulips are one of the quintessential symbols of spring in the United States, planted year after year in gardens and yards all over the country, they are not a native plant.  According to Sandra Mason, State Master Gardener Coordinator with the University of Illinois Extension, tulips are actually native to Asia.

In “Tulip: A Brief History,” David Trinklein, Associate Professor of Plant Sciences at the University of Missouri, writes about how despite their roots in Asia, tulips are very heavily produced in the Netherlands today – a long way from their native region.  He believes that tulips were first planted in the Netherlands in 1593 by botanist, Carolus Clusius.  Trinklein says that Clusius was very protective of his tulips, trying very hard to keep them to himself until one day some of his prized bulbs were stolen.  Soon after, the popularity of tulips grew into what is known today as “tulipmania.” In the book, Tulipmania: Money, Honor, and Knowledge in the Dutch Golden Age, Anne Goldgar writes about how differently tulips were thought of back then, “To us the ultimate in Dutch domesticity, in the 1630s this fragile and changeable bloom represented novelty, unpredictability, excitement – a splash of the exotic east….”  It is pretty incredible that we are now able to nonchalantly purchase tulip bulbs each year, not as an exotic symbol of wealth, but as a delightful spring pick-me-up.

Trinklein likens “tulipmania” to the present day stock market with prices changing daily and people losing and gaining wealth very rapidly depending on when they buy or sell.  He wrote, “Tulip bulbs commanded fantastic prices and only the wealthy could afford them.  They quickly became a status symbol and wealthy Dutch and European aristocrats paid huge sums for them.  One early 17th century bill of sale recorded the following transaction for a single bulb: ‘two loads of wheat; four loads of rye; four fat oxen; five swine; twelve sheep; two hogsheads of wine; four barrels of beer; two barrels of butter; 1,000 pounds of cheese; a bed with linens; a suit of clothes; a silver tankard and a sizeable wagon to haul it all away’.” 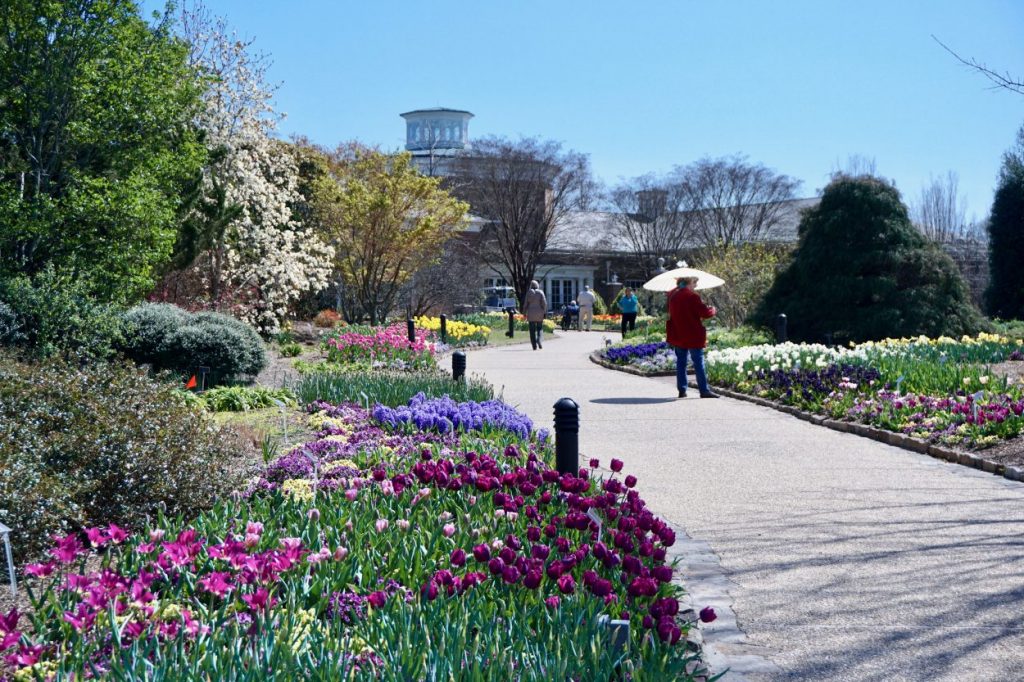 Visitors walk through a sea of tulips and other spring blooms.

I can’t imagine what the 17th -century Dutch would think if they knew that nowadays tulip bulbs can be purchased for less than a dollar each, or how shocked they would be to walk into the Central Garden through the plethora of multicolored tulips waving in the wind.  How wonderful it is that the excitement surrounding the tulips at Lewis Ginter has everything to do with a pure love for the flowers and nothing to do with how many pounds of cheese you might be able to sell them for.

Come take a stroll through the colorful array of tulips filling the Central Garden while their beauty lasts.

Erin is the Visitors Center Team Leader at Lewis Ginter Botanical Garden. In her spare time she enjoys organic vegetable gardening, comedy, and hunting for pawpaws.