What You Don't Mow Can't Hurt You

I’ve always loved meadows, Maybe it’s from watching too many episodes of Little House on the Prairie when I was a child — you know, that opening scene with Laura and her sisters running through the long grass?

Turns out unmown grasses aren’t just for the prairie anymore. The look is becoming more acceptable in other areas – even (gasp!) botanical gardens. 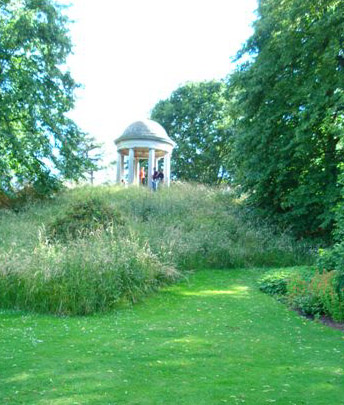 When Garden executive director Frank Robinson returned from a trip to Europe last year, one of the first things he mentioned was how some gardens there are leaving designated spots unmown. In a staff meeting last week I learned Lewis Ginter Botanical Garden has made a commitment to do the same – choosing not to mow some of the perimeter areas. It’s a dramatic shift from the perception many people may have of a formal garden.

So why are we doing it? The reasons are compelling – and relevant to homeowners as well. The environmental benefits of having unmown areas include:

Increased wildlife habitat — especially for birds, butterflies and other insects.
Part of an IPM (Integrated Pest Management) strategy — providing habitat for birds and beneficial insects helps to minimize populations of damaging insects to ornamental plants.
Better water management — slows run-off, allowing rainwater to soak into the ground, recharging local water tables and wells and reducing flooding.
Unmown lawns do not require the fertilizers and weed killers applied to most lawns — reducing nutrient and pesticide run-off to our streams and rivers.
Addition of visual interest to the landscape.

But wait, there’s more! As I was doing a little “Earth Day” research, I came across these startling stats:

And if all of this isn’t reason enough, consider this — leaving some areas unmown can save you time and money.

Still, the concept of unmown areas is hard for some people. Our culture (which can be a little obsessive!) prizes the picture-perfect lawn. It’s a good reminder that just because something looks green doesn’t mean it’s best for the environment. As we approach Earth Day on April 22, maybe this is the year to rethink the lawn – or at least parts of it. (Read more “Earth-friendly” tips for your yard and garden.)