Where Did Lewis Ginter’s Money Go? 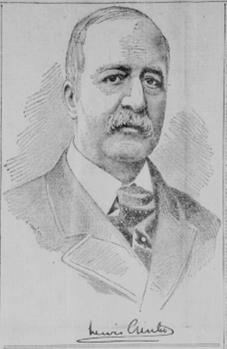 By Janet Woody, Librarian, Lewis Ginter Botanical Garden
Lewis Ginter died in 1897, at age 73, from complications of diabetes. The local newspapers of the day, The Times and The Dispatch, were filled with detailed obituaries covering his entire career and stories of his many acts of kindness and benevolence. His entire will was printed in the Richmond Dispatch of October 7, 1897. There was tremendous interest in his money.
David Ryan, author of Lewis Ginter’s Richmond, states that at the start of the Civil War, Ginter’s worth was $2 million dollars. He bought Confederate bonds and purchased cotton, tobacco, and sugar. By war’s end, he had only cotton remaining and sold that to raise money to enter into the banking business in New York, according to Brian Burns’ book Lewis Ginter, Richmond’s Gilded Age Icon.
Several sources reported that the sale of Allen & Ginter to the American Tobacco Company Ginter accrued $7 million dollars in stock. According to William N. Glenn, author of St. Andrew’s Episcopal Church and its Environs, when Ginter retired at age 67, his assets were estimated to be about $12 million.
Where did this vast wealth go and how much did he leave his heirs? A Richmond Times article of October 8, 1897 reported that at probate, his estate was valued at $2.6 million dollars. Apparently the general populace expected a much larger amount. Ginter had engaged in something of a spending spree over the last years of his life. The Times article goes on to speculate that “the Major had parted with nearly all of his stock [in American Tobacco] long before his death… Much of the money Ginter put into the Jefferson Hotel and into the suburban improvements … was realized from the sale of American Stock.” Even with his enormous outlays, he left generous sums of money and property to his heirs, friends, and employees. According to Ryan: “The bulk of Ginter’s estate went to his nephew and nieces, but nearly every charity and public institution in Richmond was named in his will, gifts that totaled more than $1,100,000. 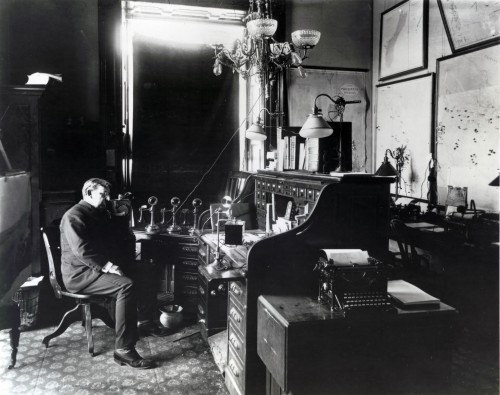 Lewis Ginter in his office, photo courtesy of The Valentine Richmond History Center.

The cigarette business made Ginter a rich man. Allen & Ginter was formed in 1872 when Ginter joined with John Allen in his tobacco company. Ginter was a marketing genius and saw a big future in cigarettes, which were added to the product line in 1874. Promoting “Richmond Straight Cuts” and “Virginia Brights” took him around the world. Allen & Ginter may have employed as many as 1,500 people at its peak.
Briefly, here is where the money went:
In 1887, Ginter and Joseph Bryan reorganized the Tanner & Delaney Engine Company into the Richmond Locomotive & Machine Works. At its peak, this enterprise employed 1,200 workers. To aid his friend Col. Page McCarty, Ginter invested in the struggling Richmond Times in 1886. He immediately grew impatient with its money demands and gave it to his friend Joseph Bryan in 1887. In 1887, Ginter purchased land on the corner of West Franklin and Shafer Streets and built the very well-appointed 901 W. Franklin Street “city” mansion reputed to have cost $1,250,000, according to Ryan. This house opened in 1892.

He purchased 160 acres and built a sprawling Victorian country mansion “Westbrook.” This estate included barns, stables, greenhouses, bowling alleys and many other entertainments. The house was filled with stained glass and parquet floors, as well as books, art, and music. He kept at least 14 types of carriages, summoned with buttons located in the entrance hall. Ryan estimates that Ginter spent millions turning this property into an estate fit for a gilded age millionaire. He resided at this home (his favorite of the two) beginning in 1889 and died there on October 2, 1897.
As a world traveler, Ginter saw new technological marvels and civic improvements that he wanted for Richmond. To this end, he always had multiple projects in the works. Developing inviting suburban retreats for the well-off was one of his most ambitious projects. Henrico County Deed records show that beginning in May 1889, Ginter made 52 property acquisitions. At the time, Henrico extended well into what is currently Richmond. Most of these acquisitions centered on the Brook Turnpike-Hermitage Road-Lakeside Avenue corridors.
In 1891, Ginter and partners chartered the Sherwood Land Company with plans to develop a suburb of large villas designed for the upper middle class. Ginter was impressed by the suburbs he saw when visiting Melbourne, Australia, during his 1888 world tour and wanted the same for Richmond. He consulted with the nationally renowned landscape architecture firm Frederick Law Olmsted & Associates. While he purchased much acreage and engaged in planning, Sherwood Park and Ginter Park were not built until after his death, and it is very unlikely that he would have named Ginter Park after himself. His heirs formed the Lewis Ginter Land and Improvement Company to carry on his suburban development dreams. The only construction to happen before his death was several worker cottages in the 3600 block of Hawthorne Avenue that still exist today.
To ease the trip to his anticipated northern suburbs, he purchased five miles of Brook Turnpike (now Road) in 1890 and spent an estimated $2 million dollars upgrading it into one of the finest roads in the state. His improvements included resurfacing, landscaping with hedges and trees, and tollbooths. His portion of the turnpike ran approximately between Lombardy Street and Westbrook Avenue.
In 1889, he and several partners chartered Bloomingdale Stock Farm, a 280-acre livestock and dairy farm, located in the area of today’s Lakeside neighborhood.
He purchased land for Lakeside Park (1891) and the Lakeside Wheel Club (1894). Lakeside Park was an ambitious project that included a dance pavilion, café, zoo, a lake for boating and skating, and a golf course. The Lakeside Wheel Club gave the city’s most prominent cyclists a country home during the short-lived bicycle craze of the mid-1890s.
In tribute to his Confederate general A. P. Hill, Ginter had a monument built at the intersection of Hermitage and Laburnum Avenue, and had General Hill’s body moved from Hollywood Cemetery and reinterred under the monument.
In 1892, he purchased land in the 100 block of Franklin Street , and built the grand, state-of-the-art Jefferson Hotel which opened in 1895. While he had partners in this endeavor, it is certain that Ginter spent a million or two of his own money on this venture – if not more. In January, 1893, fire destroyed the Allen & Ginter Tobacco factory at Seventh and Cary Streets. Ginter continued to pay employees while the factory was rebuilt.
In 1896, he paid to have the Barton Heights street car line extended north to Brookland Park Boulevard and then west to Brook Turnpike. His plan was to run the line north on his Brook Turnpike and eventually take riders all the way to Lakeside Park. He also built a narrow gauge railway to carry granite from a quarry in the Lakeside area to his construction projects. For this purpose, he purchased his own locomotive named Barbara.
Other projects: chartered the Virginia Electric Light Company (1881), was a founder of the University College of Medicine, built Deep Run Hunt Club and Rosedale Lodge, gave twelve acres to the Union Theological Seminary for its new Richmond home in the Ginter Park area, and supported the Lee Camp Soldier’s Home for Confederate veterans. Stories of Ginter’s anonymous gifts were legion. He would quietly help out local businesses, either by investing, or loaning money, and helped people who were beset by family tragedy. It is not possible to know how much money he gave away since it is not documented. And, all of his projects listed above should be viewed as employment opportunities for thousands of Richmonders, as many as 4,000 according to the Richmond Dispatch obituary.

Briefly, his last will and testament:

Ginter left his W. Franklin St. mansion and all of its contents to nieces Grace and Joanna Arents. He left Westbrook and all of it acres and contents to niece Minnie Arents Young. He left his nephew George Arents Bloomingdale Farm. He left money and annuities to all of his relatives and servants, and many friends. He left large money gifts to his closest business associates. A full page of his will is devoted to gifts to charitable institutions in Richmond, ranging from $1,000 to $10,000. The total of his cash gifts and legacies was $537,250.
While it is not possible to know where all of his money went, it is well documented that Lewis Ginter loved Richmond and wanted the best for the city and its citizens. His friend Charles Stringfellow shared a memory of the Major in the long obituary in the Richmond Dispatch of October 3, 1897: while visiting his friend at Westbrook, Stringfellow commented that Ginter had transfigured this country (the area around Westbrook). Ginter replied, “Well, I think I have improved things, but they tell me it has cost too much, and I won’t get any money back. But that makes no difference”. Ginter went on, “Those who have claims upon me are already provided for, and I do them no wrong. I had rather use my money to do some good with it than to pile up big balances in the bank. This work out here has given pleasure to a great many people and bread, too.”