On October 20th, Lewis Ginter Botanical Garden  will host  GardenRant author and New York Times best-selling author, Amy Stewart.  She’ll be presenting Wicked Bugs: A Book Talk with Amy Stewart, in tandem with the launch of her new book: Wicked Bugs: The Louse that Conquered Napoleon’s Army and other Diabolical Insects.  Stewart has been featured on NPR’s Fresh Air  (click to listen to the 20-minute interview) and in the Richmond Times-Dispatch (Bugs Gone Wild), and also locally on WCVE 88.9 in an interview with Dr. Art Evans, in both the broadcast interview and extended version. We thought you’d like to get to know her and her bugs a little better — so here’s a short Q & A to whet your appetite.  Make  sure that if you plan to attend the event here at the Garden that you RSVP as soon as possible. Space is limited.

A special note about audiences/children: Wicked Bugs, and the lecture and slide show about the book, are aimed at an adult audience. While preteens and teenagers have certainly attended and enjoyed Amy Stewart’s events, they are not geared for a youth audience and small children in particular might simply be uninterested.  Subject matter for Wicked Bugs includes graphic descriptions of cannibalism, parasitism, violent sexual behavior, and fatal diseases caused by insects. 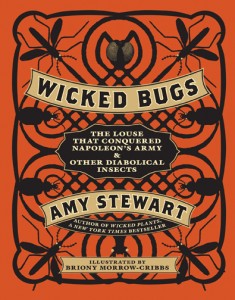 What made you decide to write a book about wicked bugs?

In some ways, it was a natural follow-up to Wicked Plants. I’ve always been interested in creepy-crawly creatures. My second book, The Earth Moved: On the Remarkable Achievements of Earthworms, gave me a chance to investigate not just earthworms but a whole range of inhabitants of the underground. Like most gardeners, I’m very interested in all the living things that inhabit my backyard. But this book goes well beyond the backyard, of course.

How do you define a “wicked” bug?

As with Wicked Plants, I made my choices based on the impact these creatures have had on human affairs. In every case, I looked for a good story—a victim, a villain, a dramatic turn of events. I found bugs that spread disease, inflict pain and suffering, cause destruction on a large scale, or otherwise change the course of civilization. Some have been used to commit crimes, some have helped destroy great cities, and some have even broken up marriages!

Generally speaking, a bug that eats plants in the garden is not really wicked enough for me – after all, most bugs eat plants. That’s how they survive. But I did include a “Gardener’s Dirty Dozen” of the most-loathed garden pests—with a few surprising facts about each one. And some insects that have caused widespread crop damage are included as well, because their backstories turned out to be surprisingly interesting. 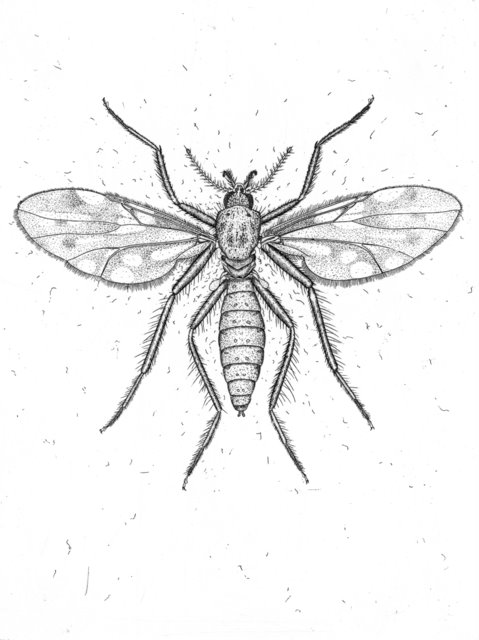 Do wicked bugs include spiders and other noninsects?

In this case, yes. An entomologist will tell you that the term “bug” refers to a subset of insects in the order Hemiptera that has piercing and sucking mouthparts. But most of us use the word to describe any number of tiny slithering and crawling creatures, and that’s how I’m using it here. Spiders, worms, centipedes, slugs, and scorpions all made it into the book.

Have you had any personal encounters with these bugs?

Sure! I think most of us have met the ticks that transmits Lyme disease, the termites that destroy homes, and the mosquitoes that have killed more people than all wars combined. I’ve never had a bad spider bite or scorpion sting, thankfully, but I’ve gotten up close and personal with a bed bug, and that was no fun. I packed my bag and walked right out of the hotel.

Do you have any favorites?

I admit that I am fascinated by the strange and intricate life cycles of some of the parasites. Here’s an example that’s not too gross: in a section called “Zombies” I write about bugs that take over the bodies of other bugs. The green-banded broodsac is a worm that lives in the gut of a bird and excretes its eggs in the bird’s droppings. In order for those eggs to survive, they have to enter the body of a snail, grow to the next lifecycle, then move up into the snail’s tentacles and make them wave around, hoping that a bird will catch sight of them and eat the snail, delivering the worm into the bird’s gut so it can finish its lifecycle. What are the chances of that happening? It’s extraordinary.

Where did you go to do bug research?

I visited a number of living bug collections, such as the terrific bug zoo at the L.A. Natural History Museum and the Insectarium inNew Orleans, and I interviewed scientists all over the world. But some of the most interesting stories came from the oddest places, like newspaper crime reports and case studies in medical journals.

What was your biggest surprise as you were researching these bugs?

I was truly astonished to realize the extent to which people around the world live with so many parasites and insect-transmitted diseases. We all hear about malaria, but when I learned that one in four people on the planet is infested with roundworms – which are larger than earthworms – it changed how I saw the world. I’ve been donating to organizations like the CarterCenter that fight these diseases since then.

Aren’t people already too paranoid about bugs? Do you really want to add to their phobias?

I think we should all learn to be more accurate and specific when it comes to our feelings about bugs. I don’t want people to run screaming from the room anytime they see a creature with more legs than they have, and I certainly discourage indiscriminate pesticide use. But we should all be better informed: the common garden spider on your windowsill deserves affection, but the blood-sucking assassin bug you encounter on a South American vacation should be given a wide berth. Learning to make such distinctions doesn’t require an entomology degree; a little common sense and an open-minded curiosity is all you need. I hope that Wicked Bugs inspires both – and delivers a few thrills along the way.

What’s the most wicked bug of all?

The mosquito. The diseases carried by mosquitoes have killed more people than all wars combined. Five hundred million people are infected with malaria worldwide, and that’s only one of the many diseases mosquitoes can transmit.