A Dry Summer Means the Botanical Garden Team Pulls Together

I write the following to document and interpret the impact of our weather on the Garden, but more so to commend the horticultural, operations, maintenance and volunteer staff for the superb job you have done under really difficult conditions in recent weeks, with special thanks to Jay, Danny, Mike, John and Karen for their efforts to ensure we have adequate water to get through the next month!  Thank you! Thank you!

You may have noticed in the last few weeks  evidence of extreme stress on trees in the landscape. I mention this for two reasons — the dramatic nature of the change, and the various ways in which these plants respond to extreme environmental stress.

You may think trees can die from drought alone, but in truth, when we have prolonged drought and no intervening rain to reduce both air and soil temperatures, trees (and other plants) actually die from root systems shutting down from soils that are too warm.  Both lack of water and soil temperatures reduce root metabolism, but once soils reach temperatures beyond 95 degrees F, root respiration slows to a stop, and the trees virtually suffocate.

Oak species tend to have the greatest fragility levels, literally reaching a stress point and sometimes “die over night,” including very mature specimens.

Other species cope by defoliation or segmental death of the plant – individual branches or certain segments (top half) of the tree dying to reduce the amount of strain on the plant’s attempts to support foliage, flowers and fruit through the uptake of water and nutrients.

Urban trees suffer the most under these conditions. The greater the soil mass, ability of soils to hold water, quantity of understory plants which help to shade and cools soils, mulch and accumulated organic materials covering root zones, etc. all impact a tree’s ability to survive these extremes.

Irrigation provides both water and soil cooling, and can make the difference between life and death, but water alone can’t overcome the impact of hot soils – 100-degree wet soil and 100-degree dry soil are equally fatal. Trees living in small soil volumes, with large tree-to-soil ratios, in compacted soils, with limited root systems, without the benefit of other “communities” of plants to mitigate their environment, etc. really suffer in this kind of weather.

There are ethical discussions about irrigation and whether it should be used during water stress. Luckily, the vast majority of Lewis Ginter’s irrigation water comes from rain we collect in our lakes from surface run-off, roofs and clean paving. The issue of using treated water from public utilities gets more complex (and that is subject for another discussion), but I believe trees do so much good for our environment, the use of water to sustain them is inarguable.

We had a very wet winter and spring, and ideal pollination conditions for many spring flowering trees. This is now seen in particularly heavy fruit set, as seen in our venerable female Ginkgo at Bloemendaal House. Maples (Acer species) and Redbuds (Cercis species) also had very heavy fruit set this year. Plants invest the majority of their energy into their flowers and fruits – their next generation. Sadly, our Ginkgo has invested so much nutrient in its fruit that the accumulated weight has resulted in the spontaneous loss of several major branches in the past month. This is highly uncommon, but in this case, it is too much of a good thing. Trees currently in flower or fruit are subject to especially high stress as they attempt to survive in order to reproduce. 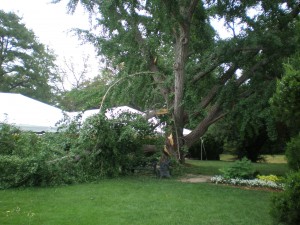 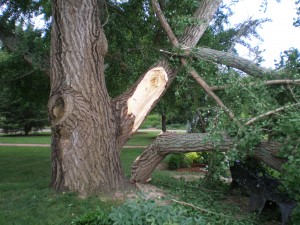 Not all trees within similar conditions respond the same. There could be multiple factors involved, (disease, insect infestation, etc.), but under these extreme conditions, the genetics of a plant have huge influence. In truth, we have limited clones in most landscape plantings, and genetic variation is an important factor in a tree’s longevity. As in all of nature, it is the survival of the fittest. So, if you see one tree thriving in a landscape and another in stress, it could well be its genetic make up – just as some of us humans live to a ripe old age, and others do not.

It has long been my contention that the entire Botanical Garden is one big research project – that so many plants in so many conditions have never been assembled in Central Virginia before. As they mature, grow into communities, impact one another with shade, root competition, etc., adapt to micro-climates, and are tested by time, weather, disease, insects and cultivation, our accumulated learning will be rich indeed.

In spite of many weeks of record-breaking temperatures and drought, we have very few plants which are “at risk” or which have been damaged by the conditions. Those few which are struggling will teach us all more about nature in general, and the plants species, varieties and cultivars specifically.

I want to commend the Lewis Ginter Botanical Garden horticultural and maintenance staff and volunteers for an outstanding job of keeping the Garden’s collections healthy and strong through this period. Their steadfast dedication seven-days-a-week keeps this “research project” an oasis of beauty and a center of education which benefits the entire region.