A Not So Sweet Surprise 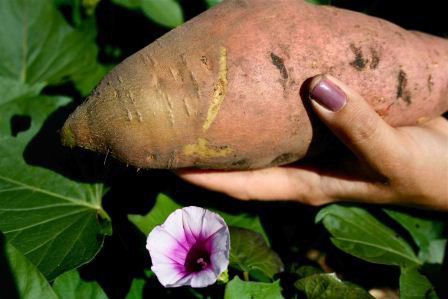 Here is the pretty side of our giant Beauregard sweet potato.

As we’ve mentioned on this blog,  in July volunteers planted 250 sweet potato slips in the Lewis Ginter Community Kitchen Garden. The slips were donated by Clifton Slade from his organic farm in Surry, Va.   Sweet potatoes are delicious and packed with Vitamin C, calcium, potassium, and beta-carotene. These orange tubers, which are not related at all to white Irish potatoes, are so nutritious that they are considered a super food. And FeedMore also likes that they store well and have a long shelf life, so if needed they can store them for when they are needed.

We planted 125 each of the Beauregard and O’Henry varieties. And our sweet potato patch is thriving! We expect to begin harvesting tomorrow, October 20. The vines are sprawling and healthy and the bees love the pretty purple morning glory-like blossoms.  Recently Brian Vick, Community Kitchen Garden Coordinator, and I saw an orange tuber poking out of the ground just begging to be picked.  So we picked it of course. This monster potato must have weighed several pounds! It was a fine specimen on one side, but on the other side there were quite a few burrowing marks. Some creature was nibbling on our sweet potato while it was in the ground. 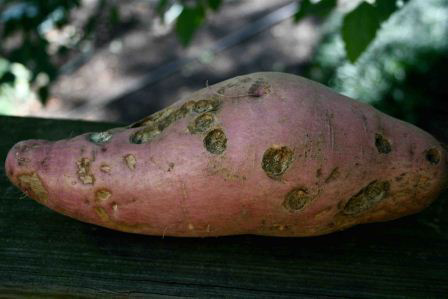 …and here is the not-so-pretty side.of our giant Beauregard sweet potato.

After some research, we determined our pest was the white grub. White grubs are the larval stage of scarab beetles, and many different types of scarab beetles were spotted in the Community Kitchen Garden this season including the June beetle, bess beetle, and grapevine beetle. The adult beetles lay their eggs in grassy areas, composts piles, mulch piles, etc. In fact, we inadvertently encourage the presence of some of these beetles by our extensive use of wood chip mulch. Once the grubs hatch they feed on organic matter like compost, decaying wood or roots and tubers of plants. These not-so-little grubs are known to cause major damage to turf grass. 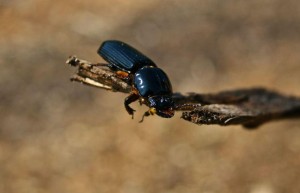 The bess beetle is sometimes referred to as the patent-leather beetle.

To our great relief, the damage to our sweet potato was only cosmetic. To complete our inspection Brian took the tuber home, peeled it, and had it for dinner. He reported back that the potato was very tasty and had great texture. Since our sweet potatoes will be donated and most likely peeled once they make it to the Community Kitchen, the damage to the outside won’t really matter too much. This cosmetic damage could be devastating though if we were growing these potatoes to sell at market. Farmers in the south have lost fields of sweet potatoes to white grubs because the damage they cause renders the tubers unmarketable, even though the damage is only skin deep. 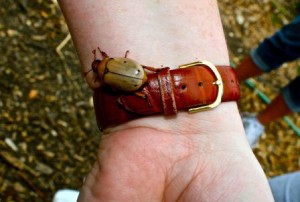 Many consider white grubs to be harmless or even beneficial when it comes to composting, but I think a sweet potato farmer would argue that point.  If you are looking to control the white grub population in your garden there are two biological control products to consider. Milky spore disease -– a naturally occurring soil bacterium — is one product available and is known to be an effective treatment in the Mid-Atlantic region. Milky Spore is not harmful to beneficial insects, birds, bees, pets or man. However the product only works on Japanese beetle grubs, so in this case it is important to identify which grub you are actually dealing with. Another biological control option is parasitic nematodes, which are usually shipped fresh and need to be used right away. If you wish to treat white grubs in your lawn there are many non-organic preventative and curative treatments as well.
Insect-parasitic nematodes, or microscopic worms that attack insects, are another biological control option that can be used to treat white grubs in your lawn or garden. These nematodes are not to be confused with plant-parasitic nematodes that attack plants. These nematodes enter the insect host and transmit a bacterium that is only toxic to insects; it has no effect on birds and other mammals. Insect-parasitic nematodes are naturally occurring in the soil but can also be purchased. Steinernema carpocapsae and Heterorhabditis bacteriophora are two species of insect-parasitic nematodes that can be purchased. There is also a new strain of Bt (Bacillus thuringiensis) called Bt Serovor japonensis that has shown some success in treating June beetle larvae. 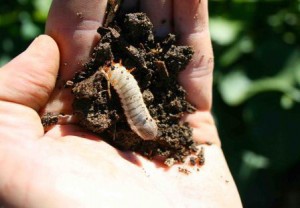 This creepy crawler is a white grub on its’ back, they curl into a C shape when agitated.

We‘ll report back with more information on the damage we sustained and the quality of our sweet potatoes when we harvest the rest later this month.

As of today was have donated 9,955 lbs. to FeedMore, so we are only 45 lbs. away from the 10,000 lb. goal! We hope to harvest a few hundred pounds of sweet potatoes, but you know what they say. You can’t count your chickens before they hatch or your sweet potatoes before they’re harvested.