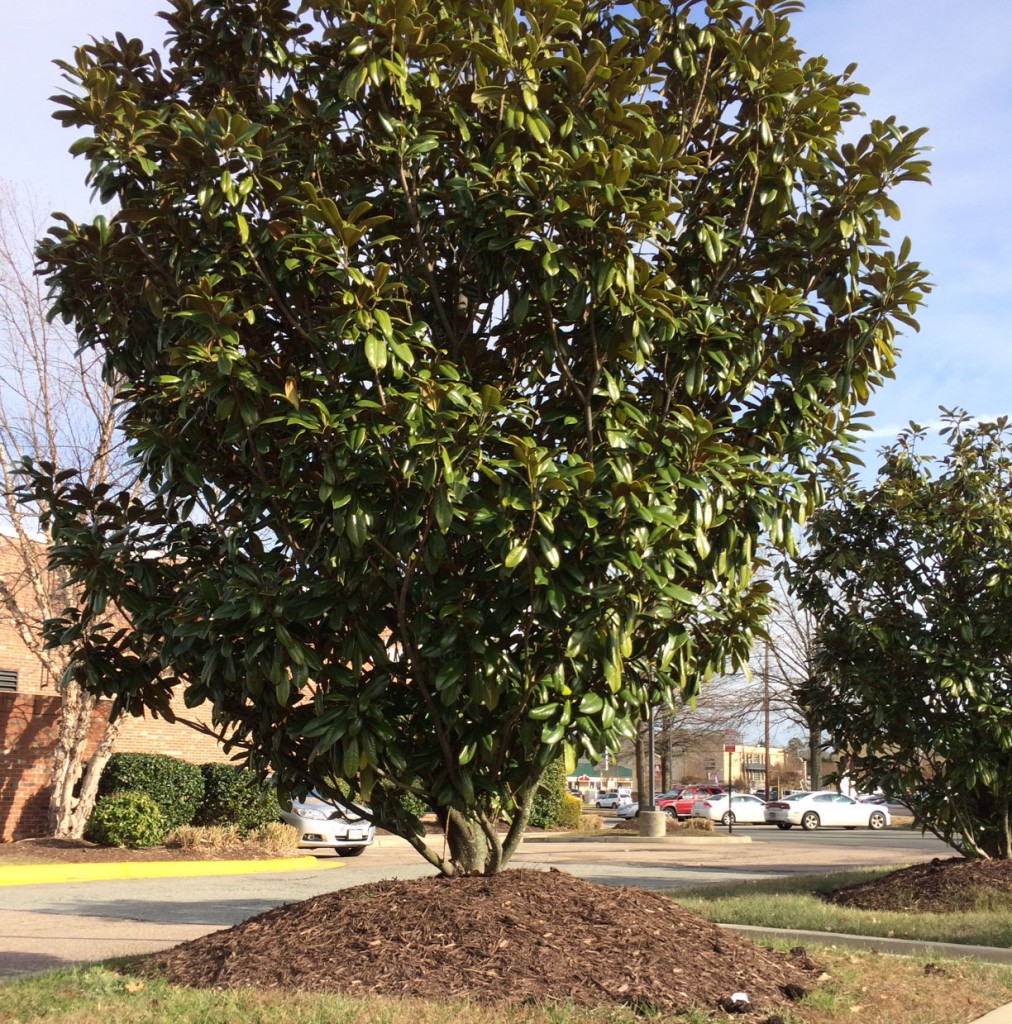 A magnolia tree with a mulch “volcano” at a nearby shopping center.

There may be volcanoes in your yard. Don’t worry, they’re not active. They’re mulch volcanoes. But beware. They may be endangering your trees!

Those of us who are guilty of over-nurturing when we garden will sometimes pile mulch into deep pyramid-shaped hills that push up against the base of a tree. Although they are commonly found,  horticulturists and savvy gardeners call these man-made menaces “mulch volcanoes.” They can be devastating to the tree.

Mulch piled too high on the trunk can cause all sorts of damage to trees.

Here’s how over mulching can contribute to the decline of a tree: 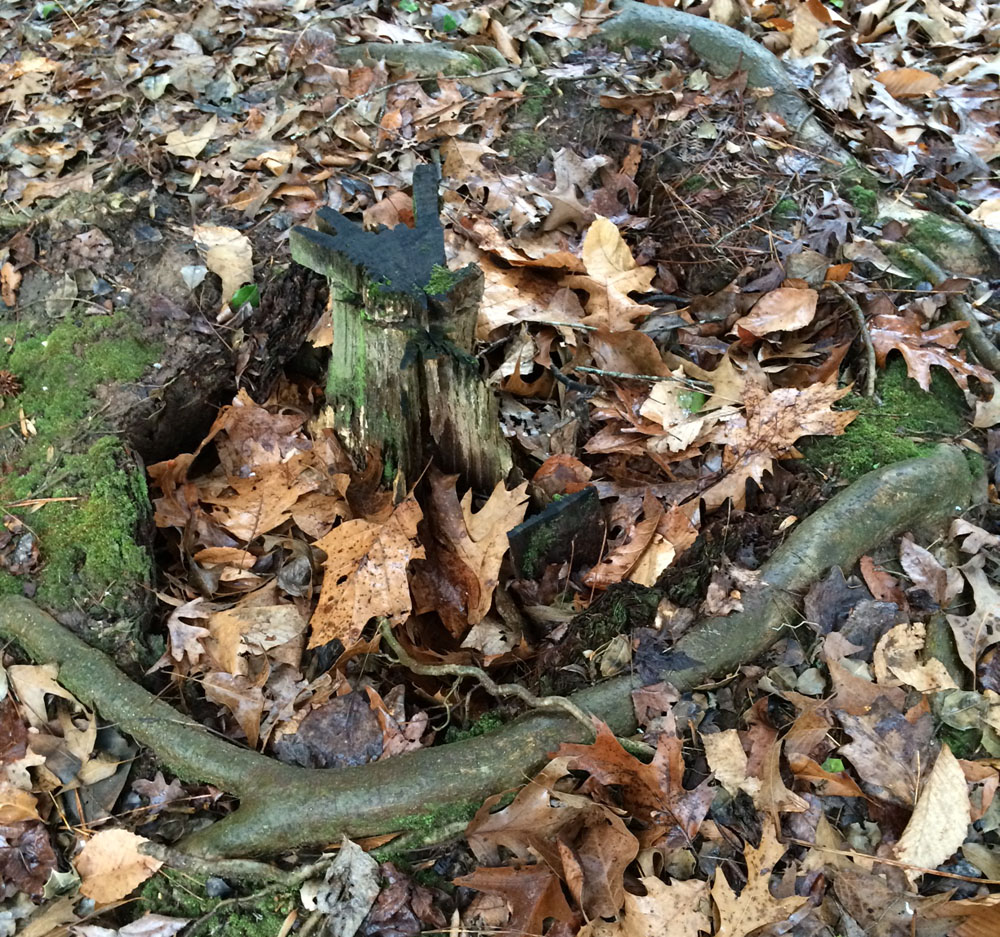 The roots of this tree (not at Lewis Ginter Botanical Garden)  grew to encircle or “girdle” its trunk, strangling it by robbing it of moisture and nutrients. This problem was likely caused by improper mulching.

But mulch is important for keeping the soil cool and moist and helping to combat weed growth. Because it is organic matter, mulch attracts worms and other soil-dwelling invertebrates that help aerate and improve the soil. And mulch zones around trees and shrubs are extremely helpful in protecting the plants from the man-made threat of mowers and string trimmers.

So how to avoid making mulch volcanoes? Doughnut mulch! Senior Horticulturalist Elizabeth Fogel suggests spreading a ring of mulch in layer that is 1 – 3 inches thick at its outer edge and tapers gradually to nothing at the base of the tree. The tree stands happy and healthy in the “doughnut hole.” (And you don’t waste time and money over-mulching.) 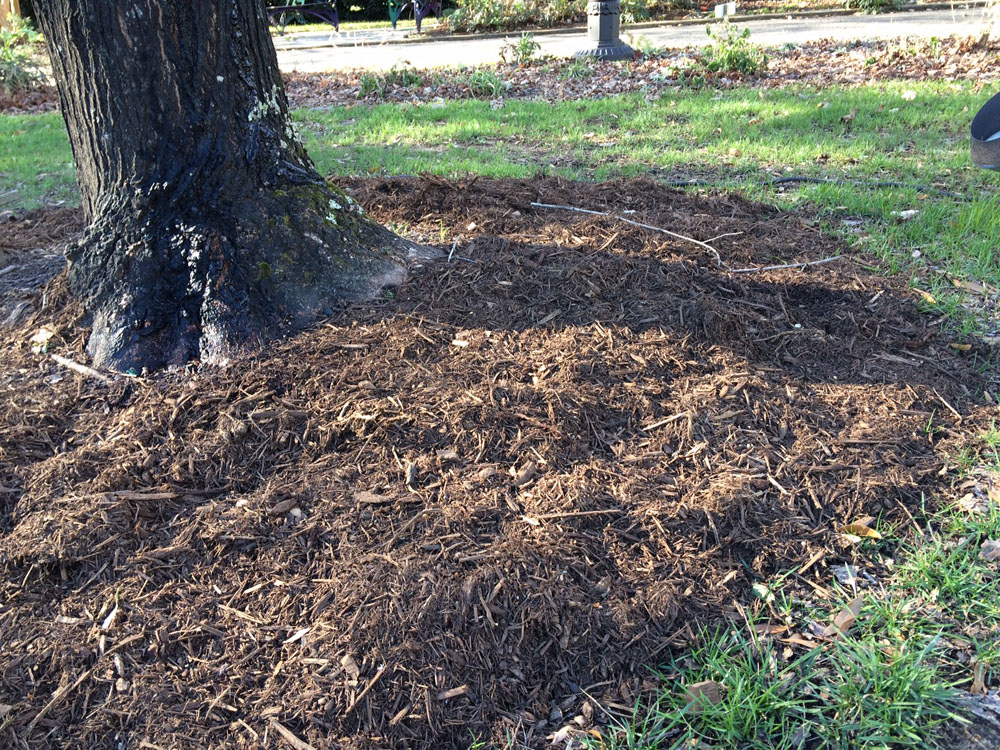 “Doughnut” mulch is applied in a flat ring that tapers from 3 inches at its perimeter to nothing at the center, leaving the root flare standing free and clear.

“The root flare,” she explains, “is the area at the base of a tree trunk where the main stem tissue transitions to root tissue.”  Look closely, and you can see that the bark on the main stem is rough, while the “bark” on the roots is smooth and waxy. “Keep the root flare above the soil line, dry and clear of soil, mulch and vines,” Fogel recommends.

So, proper mulch application is a simple matter of less is more.  Just remember, don’t over mulch —  doughnut mulch!

Should You Mulch in Winter?
Learn More
Take a Class in Gardening
View our Current Classes