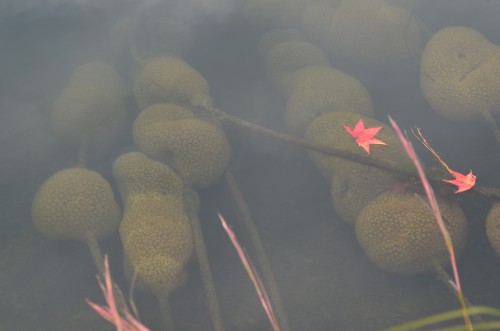 Look what we found in Sydnor Lake! These are bryozoa — harmless aquatic invertebrate animals. Sometimes they are called moss animals. We believed these were Pectinatella magnifica, and Eugene G. Maurakis, Ph.D., Museum Scientist at the Science Museum of Virginia, confirmed that we were right.

The biology department of the University of Massachusetts has more great info on bryozoans:

Pectinatella magnifica is a member of the animal phylum Ectoprocta (common names: bryozoans, moss animals), a group with a fossil record extending back to the upper Cambrian (500,000,000 years ago!)……The colony is gelatinous, firm and slimy to the touch. The inner gelatinous mass is 99% water. The surface appears divided into rosettes, each with 12-18 zooids. Massive colonies may exceed 2 feet (60 cm) in diameter, although more typical sizes are 1 foot or less. The colonies form on submerged logs, twigs, even wooden docks.

The Virginia Institute of Marine Science helped identify  a similar “Alien pod” a few years ago in a lake near Newport News, VA. Marine bryozoans are filter feeders — meaning that they help clean the water they are in. The ones here at Lewis Ginter Botanical Garden are attached to old tubing that belonged to an aeration system for the water.

VIMS professor Carl Hershner notes that bryozoans consume algae, so the “alien pod” is “actually a good thing to have around, despite its looks.” ”It’s not a sign of bad water quality,” he adds, “and it doesn’t hurt fish.