It is easy to break the rules when you don’t know them!
Every winter I would feel sorry for so many poinsettias lying in the alleys on my morning dog walks. Those bright red splashes of color were so cheerful! A poinsettia is a symbol of the holidays, a spark of color and warmth in the midst of cold and often gray winter. How could anyone throw them away?
One winter, several years ago, to alleviate my sorrow, I decided to adopt a poinsettia or two that were about to be tossed to see if I could keep them alive until the next December. There’s a finicky process you are supposed to go through to get them to “rebloom” but this was just an experiment.  Throughout the rest of the winter, I left them in a sunny window facing west, the only sunny window available. Being a conscientious gardener, I did keep them well watered. At least that rule wasn’t broken.

By late April, as soon as it was warm enough, I put them in new pots and placed them outdoors in the open shade. I broke the rule that said put them in the basement and keep a 65-degree temperature for a couple of weeks. As soon as they went outside, I pruned them to diminish any legginess. Another broken rule since I wasn’t supposed to do that until May while they were still indoors. I did not touch the milky sap since it looked scary. Poinsettias are part of the milkweed family and I didn’t want to tempt fate by developing a rash on my skin. Initially, they looked dreadful with only a few leaves and twigs. However, I kept the plants watered and watched to see what might happen. I did fertilize, but not every two weeks as experts recommend —  maybe once a month if I remembered.
By late summer tiny new leaves had sprouted and the plants looked relatively healthy. I did not pinch back the stems one inch in July as suggested since the plants looked just fine. I pretty much ignored the poinsettias unless watering was needed. That certainly was not a problem last summer. 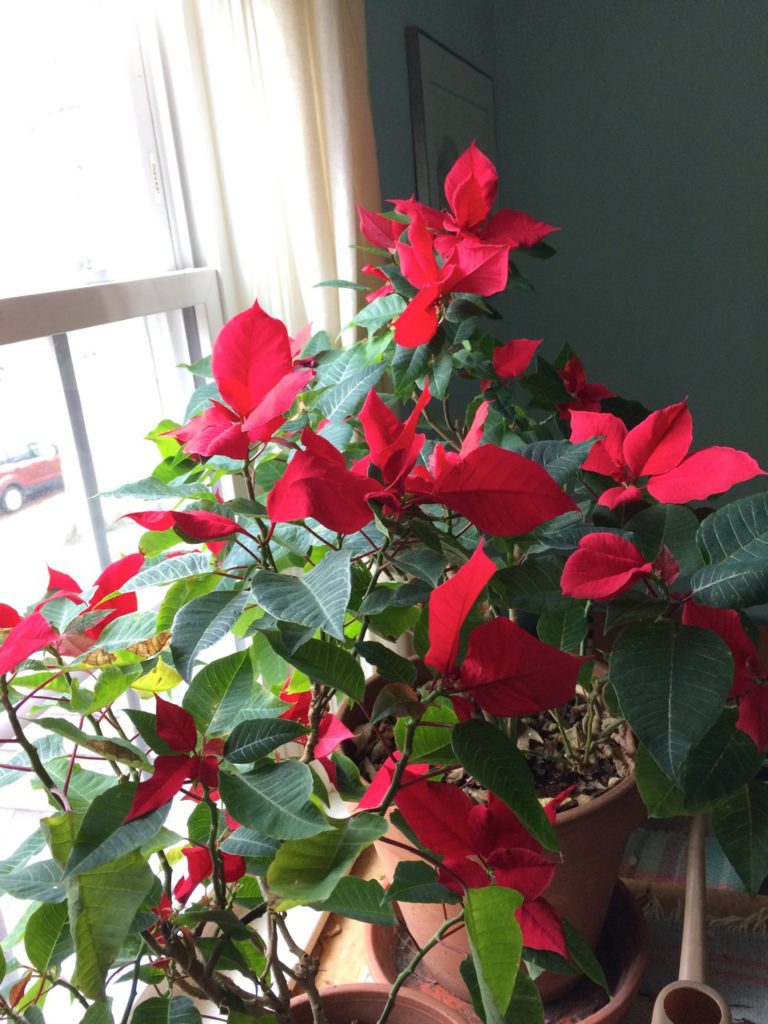 Did you know that poinsettia flowers are actually yellow? What we think of as the red bloom is actually a bract or variation on a leaf.

By late September or early October, before temperatures dipped below 55 I brought them back inside to their non-sunny window since the oaks would keep their leaves until the end of November. Big broken rules since the poinsettia were supposed to be getting plenty of sunlight during the day except when they were to be placed in a completely dark room from 5 p.m. to 8 a.m. to set the blooms. But that just didn’t happen. Too much work.
In spite of playing loose with the light and dark, by early December I had tiny red leaves beginning to show. That red that we think of as the bloom of the plant is actually a bract or a variation of a leaf. The true flowers of the poinsettia are actually yellow!  But I was not concerned as to when they put on their brilliant red show and by February they were in full regalia. I love seeing those bright red leaves on the cold and dreary days of February. I call them my Valentines.

I have kept or given away some of the poinsettias. One died from something after three or four years. These two bushes pictured happen to be my newest generation with about 2 dozen blooms on them. Somebody planted a daffodil bulb in one pot so I have an extra bonus for spring. What a pleasant surprise that will be!
Poinsettias may be tricky to grow if you are aiming for perfect bloom time — the holidays.  However, I have found no problem growing them even though I pretty much ignored all the rules, just to enjoy these February beauties.

Cyane has volunteered at Lewis Ginter Botanical Garden for 10 years since she left her position in multimedia at the Science Museum of Virginia. You will find her pulling weeds in the Children’s Garden or the Asian Valley or stringing lights for Dominion Energy GardenFest of Lights. She is also a Tree Steward for the City of Richmond and a master naturalist for the state. Communing with nature is in her blood.