December 12 is National Poinsettia Day, honoring Euphorbia pulcherrima: the country’s most popular holiday plant, according to retail sales. Purchase one locally, and chances are it originated in Ethiopia or Costa Rica, some 6,000 to 7,000 miles away. 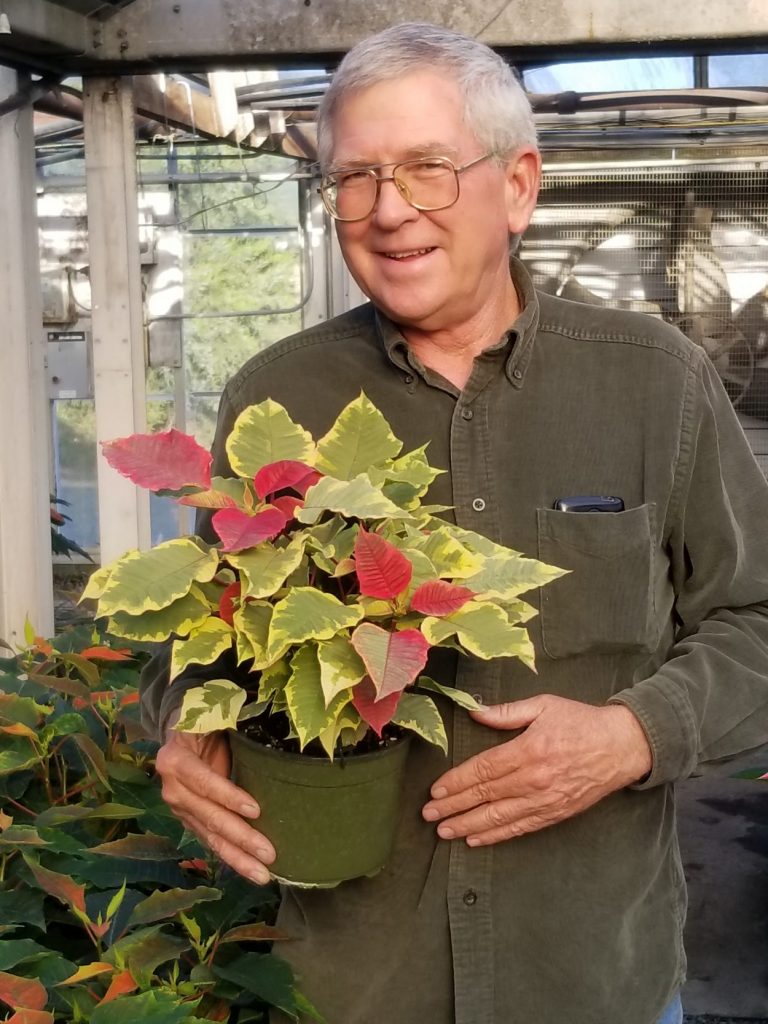 Cary Gouldin, who manages Strange’s Wholesale Greenhouses, has been a poinsettia farmer for more than 40 years.

Cary Gouldin, one of three Richmond brothers who own Strange’s, shared how poinsettia cuttings (also called slips) are started overseas around May.

“Growers [in tropical climates] produce unrooted, small slips, then send them by air to propagation farms across the world,” he said. Propagators stick the loose cuttings in a powdery rooting hormone and set them in oasis blocks (wet foam bricks used for growing and floral design). For the next three to four weeks, the indoor farmers generously mist the slips to maintain high humidity and encourage root growth. Once roots form, they’re ready for shipment to growers, such as Strange’s Wholesale Greenhouses in eastern Henrico County, which Gouldin operates.

“We receive the rooted cuttings weekly, starting around the second week in July through mid-September,” Gouldin said. Delivery times vary according to each variety’s days to maturity. For example, the Tapestry poinsettia grows slowly, so it’s one of the first deliveries. In contrast, Snowcap White is a vigorous grower. It can be planted as late as Aug. 15, and still be ready for the holiday season.

In preparation, various-sized pots are filled with potting soil. As rooted slips arrive, staff hand-plants them – all 25,000. Gouldin has supervised the process since 1976, and he said no year has been the same.

“It’s always a little different because of weather, who shipped from where and what condition they’re in,” he noted. “You also have to be able to adapt to the growing requirements of the plant because it’s not one method for all.” Poinsettias aren’t as temperamental as Easter lilies, perhaps, but Gouldin says they still require constant monitoring.

“I’m here at the greenhouses seven days a week,” Gouldin admitted. “And I’ve spent many a night here.”

Maturing poinsettias require misting for seven to 10 days, depending on the outside temperatures and the sun’s drying tendencies. Strange’s relies on an overhead irrigation system that eases the watering process. Thousands of small-diameter drip tubes hang down into the poinsettia pots for direct watering at the flip of a switch. 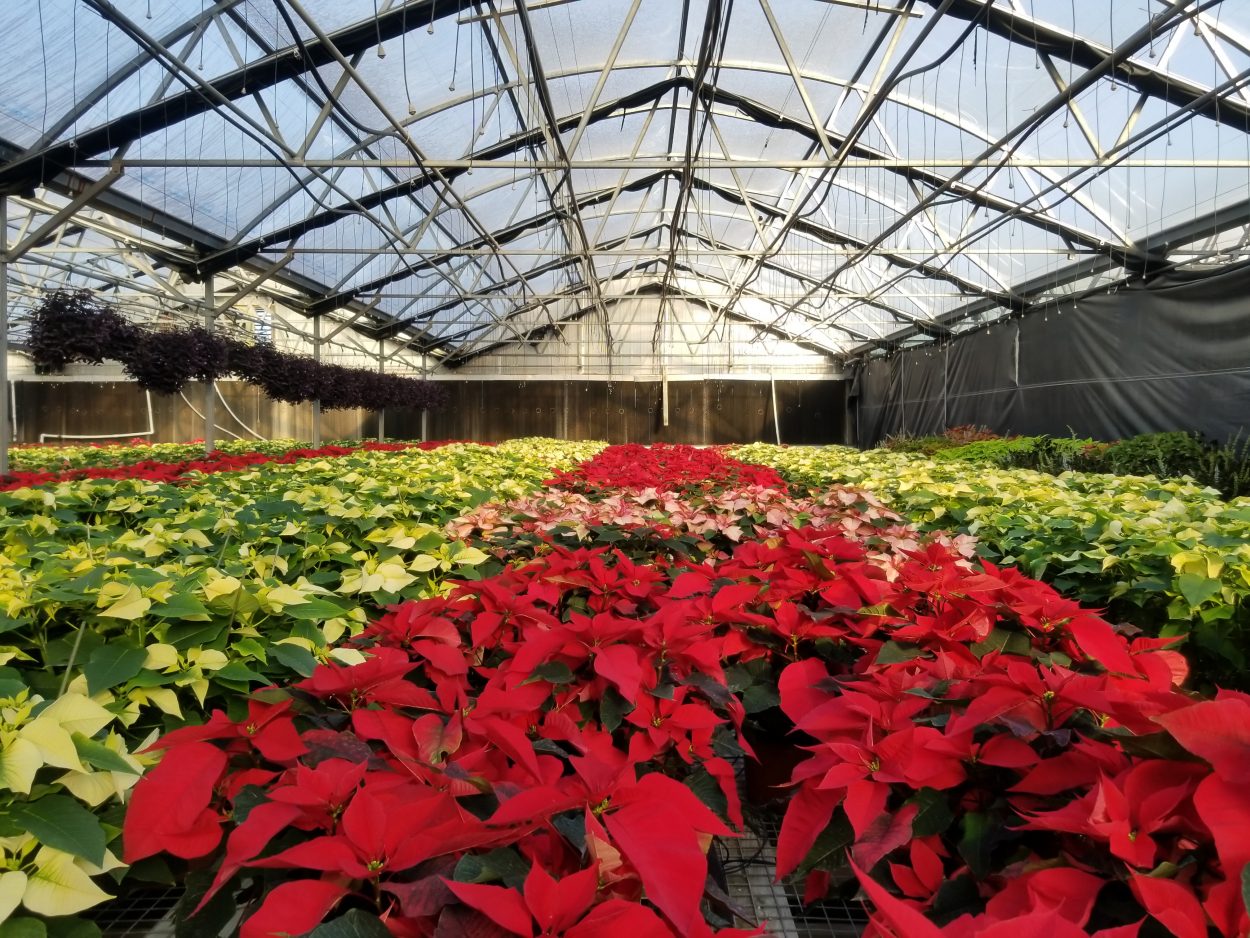 Prior to late-November deliveries, Strange’s Wholesale Greenhouses in eastern Henrico County were filled to the brim with maturing poinsettias.

Fertilization is almost as frequent, as is monitoring for pest control. “Whitefly is the worst because it gets under the leaves,” Gouldin said. Mealybug, red spider mites and scale can cause havoc, too. 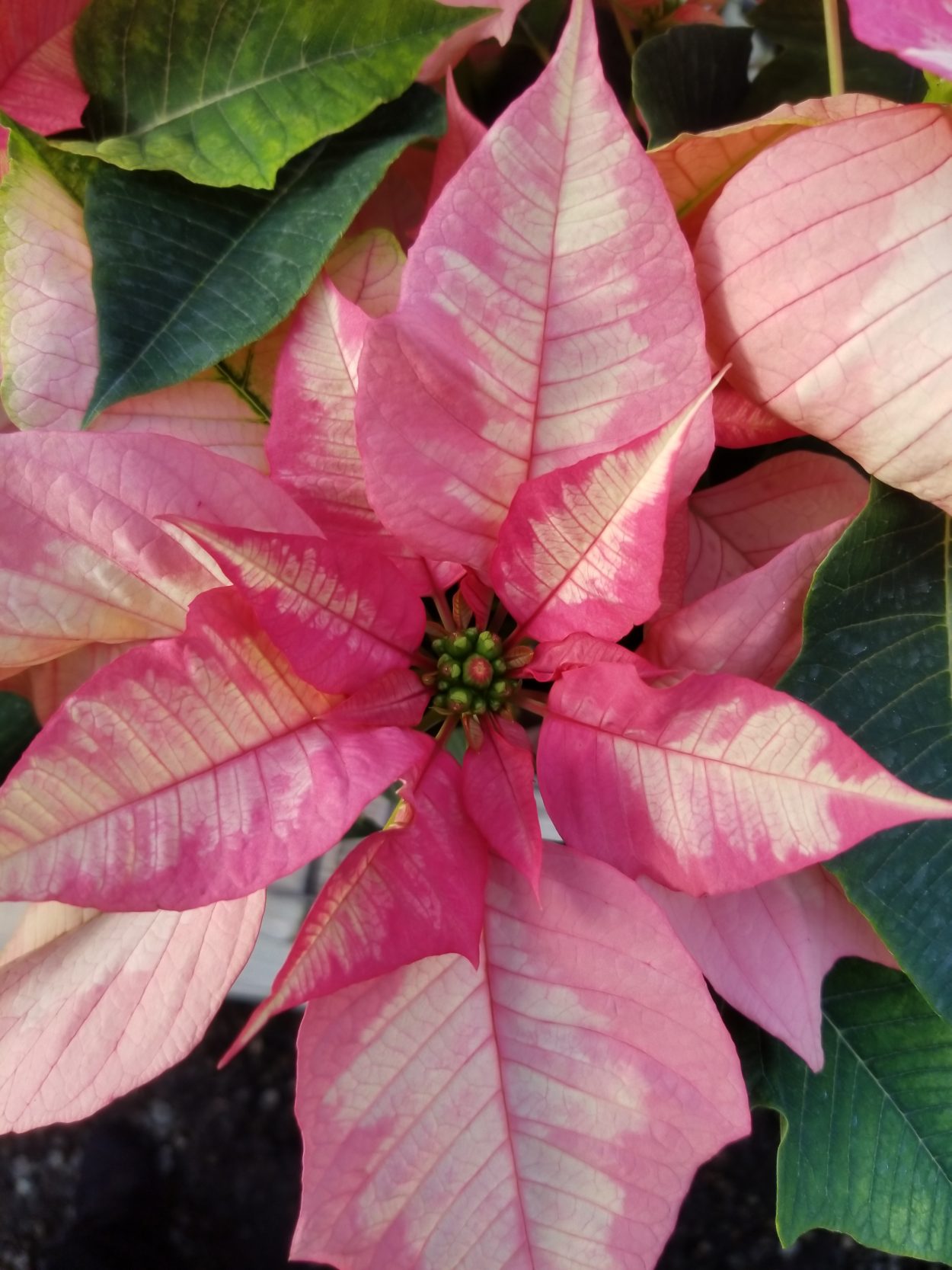 The charming light-pink variegation of the Ice Punch poinsettia increases as the plant grows.

Temperatures must remain 75 to 85 degrees during the first weeks following transplant. After the poinsettias are well established, temperatures should range between 65 to 70 degrees, which proves trickier across the seasons.

“The hardest part is summertime’s heat,” Gouldin said. “When it’s 100 degrees outside, it can be 120 [degrees] in the greenhouse.” White shade cloths hang along the greenhouse ceilings to help reduce heat transfer. Conversely, during autumnal temperature dips, the white cloths are removed so solar heat can be maximized.

Poinsettias must be regulated for size, too. Outgrowing the pot can cause breakage and instability. “An 8-inch poinsettia will take all the room you give it,” Gouldin said. “Poinsettias are very fast growers, so we use growth regulators to moderate how big they get.” In addition, modified leaves (called bracts) are pinched off two weeks after transplant to control shape and size. Insertion of a moveable plastic ring, positioned just above the pot rim, provides branch support as the plant grows.

“I tell my staff that these living plants are babies,” Gouldin said. “We must be aware who’s crying and who’s not. We’ve got to be mindful of each plant’s need.”

As the holidays approach, staff organizes orders for shipment to florists, garden centers and indoor designers across the Richmond region. Deliveries extend from points west of Charlottesville to Virginia Beach, and northward to the Washington, D.C. beltway.

Even after a 41-year history of the family producing more than 36,000 poinsettias each year, Gouldin’s mother keeps it traditional.

Gouldin smiled as he said, “She still gives them as gifts, but she always sticks with the reds.”

A poinsettia can last three or four months, especially if you start with a healthy plant that displays:

This article first published in the Richmond Times-Dispatch in December 2017.