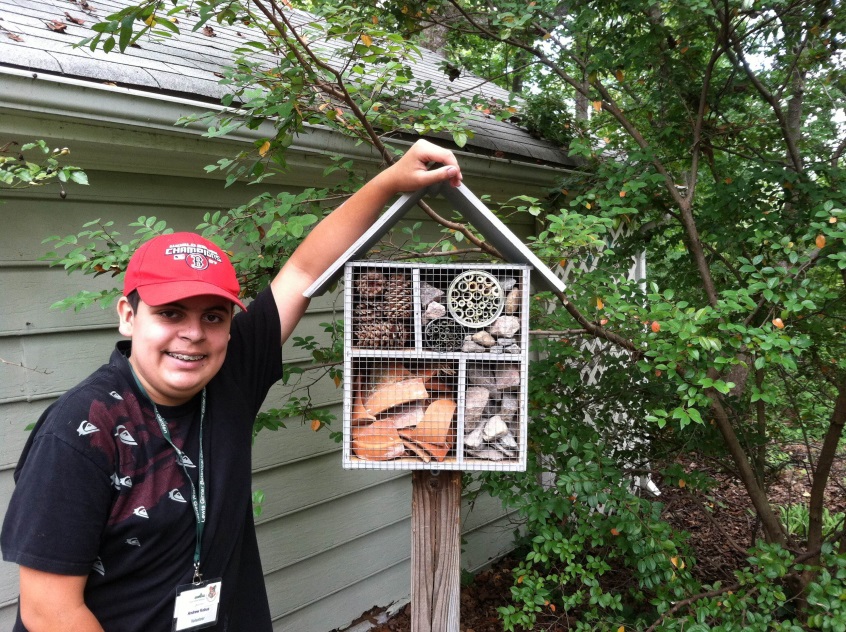 The smile of accomplishment

Drew Kobus is a long-standing participant in the Service Learning Program, a volunteer program for youth (ages 13-18) offered through the Children’s Garden.  This is Drew’s fourth year of volunteering at the Garden and he has moved up to the highest level of responsibilities within the Service Learning Program, Level III. As part of the requirements, for the program, Level III volunteers are asked to complete a project, either a service project or a research project. Completing the program is not only a great accomplishment, but also engages youth volunteers to have a personalized vested interest in the Garden. Completing the program is also a foot in the door in terms of employment– outstanding Service Learning Program Level III’s have obtained a variety of jobs at the Garden. 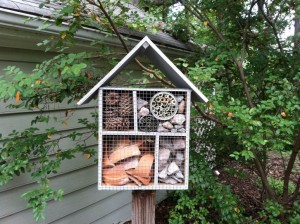 A Mason hive is a hive with compartmental qualities, which is the preferred habitat of the mason bee.

For the project requirement, Drew chose to do the service project, which fits Drew’s preference of hands-on volunteer opportunities. Drew explains how and why he chose creating a mason bee hive:

“I thought of how great it would be if we had a bee house at the gardens for guests to observe. I built a Mason bee house instead of making a hive for a different type of bee for a multitude of reasons, for one thing mason bees are solitary so they don’t swarm, secondly they are very unlikely to sting people seeing as how the males don’t have stingers and the females will only sting if they are trapped, also it is very low maintenance, and I felt I could make a place to protect our pollinators but also have it be artistic.”

Originally, Drew had hoped to make use of an old nesting structure in the Children’s Garden, however, he ended up having to start from scratch.

“I had originally thought I would reuse part of an existing structure, but the existing material was too rotted to be useful, making it so I had to create the entire structure from scratch, as opposed to just part of it.” But it turns out, this challenge was Drew’s favorite part of the project “I love using tools and building things so it was a great deal of fun for me.” As Developer for this program, it was great to watch Drew solve these problems while creating such a wonderful habit from what otherwise would have become trash and from scraps.

The Children’s Garden loves Drew’s finished project, not only because it promotes recycling but also because he is a creative and passionate volunteer. You may be wondering — where did this awesome kid come from?  Participants in the Service Learning Program join for a variety of reasons, often  in order to get community service credit for a specialty school program,  but Drew’s motivation is unique:

“I give all credit for my interest in gardening and volunteering at the Garden to my grandparents, Barb and Buzz Sawyer. They have both been volunteers at Lewis Ginter Botanical Garden for quite some time as well as being part of the Hanover Master Gardeners Association, I have grown up helping them with their garden and visiting LGBG. So when I found out I could volunteer and help with more of the behind the scenes work I was all for it.” 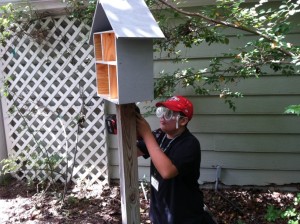 Drew Kobus, working on his project.

Drew has not only made a home for our pollinators, but has also created an educational platform for our guests. I highly recommend coming down to the Children’s Garden to see what this 15-year-old has made for the Garden, especially if you want to see a hive up-close.  It’s really neat!

Want to learn more about mason bees and orchard mason bees (Osmia lignaria)? The United States Department of Agriculture, Forest Service has some great facts from Beatriz Moisset and Vicki Wojcik, of  the Pollinator Partnership:

A quick fact – the first brood cells that the orchard bee makes (those that are furthest back) will develop into female bees, while the ones closer to the entrance of the nest will become males. Scientists believe that bees do this for one of two reasons. Males need to emerge first so that they wait for new females during mating season – putting them closer to the entrance helps them emerge first. Bees also suffer nest predation, and the brood closer to the entrance would be predated first. Females are much more important to the reproduction of a species than males are. Putting the males as a barrier increases the survival and fitness of the species.