Well, the pools are closed for the year and the kids are back in school; I guess that means that summer is officially over!

But nobody informed the vegetable garden – we continue to harvest vegetables every week! However, as the weather begins to cool down, we have noticed that some of the plants are not producing as many vegetables as they used to. The zucchini and summer squash faded out a couple of weeks ago, and so we have ripped out all of those plants. We planted a second crop of squash about four weeks ago using a variety known for early prolific growth; they produced flowers after a couple of weeks and this weekend we harvested the first crop of veggies off them.

We have also planted some fall crops in place of the zucchini. Last week we put in several rows of broccoli, cabbages and cauliflower, and yesterday we put in the last few plants. After planting we added a good dose of liquid fertilizer to give them a boost. The plant varieties have been selected for early maturation, so hopefully in about 60-90 days we will be pulling out more veggies for delivery to the FeedMore foodbank! 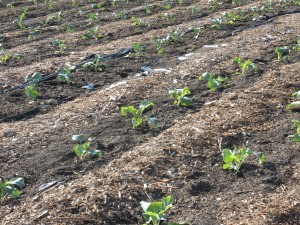 The tomato plants seem to be struggling right now. Many have started to die down and fruit production had definitely slowed. We still have a good number of green tomatoes on the plants, but they are much smaller in size. Another problem is they are cracking before they fully ripen, or they are being eaten by some kind of bugs. To see if we could prolong the tomato production, last week Tom Brinda, Assistant Executive Director of Horticulture at Lewis Ginter, chopped off the tops of some of the tomato plants. Some types of tomatoes are ‘indeterminate’, others are ‘determinate’ – chopping the tops off indeterminates should force the plant to stop growing taller, and put more energy into the fruit production. This practice is often done in outlying areas and in the mountains, especially where you get early first frosts that threaten to kill off the plants. We thought we would try it out to see if we could get one last big bounty before the season is over!

This week we also harvested some more eggplants and bell peppers. We don’t expect these plants to last much longer either, but they have been good while they lasted!

We will continue to work in the garden on Saturday and Monday mornings through September but starting in October we will switch to Saturdays only. Volunteers are still welcome to join us whenever you can – we would love to see you!