Note: This article was originally published earlier this summer in the American Society of Botanical Artists magazine.  Reprinted with permission.

The Lewis Ginter Botanical Garden holds some 2,500 original watercolor botanical drawings by artist/ cartographer Alexandre Descubes.  In January 1997, Lora Robins, Garden benefactor, purchased 794 of Descubes’ watercolors with the purpose of providing the Garden with art appropriate to its mission. Nothing, not even a first name, was known bout the artist whose signature  “A. Descubes” appeared (in ink) on almost every one of the 17.5 x 10.5” sheets. Research on the collection and artist was undertaken at this time but very little could be found. 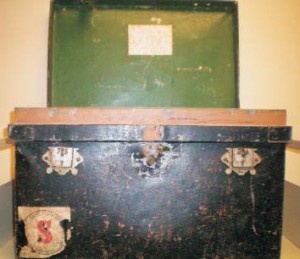 Very much the picture of a treasure chest, the little metal box that housed 1000 artworks of Descubes is part of the Lewis Ginter Botanical Garden collection too. The artist whose signature, “A. Descubes,” appeared (in ink) on almost every one of the 17.5 x 10.5” sheets. Research on the collection and artist was undertaken at this time but very little could be found.

Correspondence from the period mentions a 1982 Sotheby’s catalog of a sale of some works by A. Descubes and an album assembled by Lady E. T. Bourne around 1912 in Ootacamund, India in which a “Mons. Descubes” was listed as an artist of two watercolors. Perhaps a small clue?
The collection was regularly used with botanical art classes but no further progress was made in discovering the artist’s background until late 2003. Then, a Garden board member noticed botanical watercolors by “A. Descubes” in a gallery window in California. This dealer had over 1,000 pieces for sale along with the metal trunk in which they had been stored. Mrs. Robins generously agreed to purchase the entire group. The addition of so many new pieces made defining the Descubes collection a priority.

In 2001 I was pursuing a Master’s in Art History, and the Descubes collection presented an intriguing puzzle. I had many questions and few clues. Was “A. Descubes” a man or a woman? Several volunteers were hoping for an intrepid Victorian adventuress as an artist. What nationality was Descubes? Where was the artist born and when? The dated pieces were all late 19th or early 20th century, indicating a mid-19th century birth date. Why were these plants depicted? The work represents 164 families, and 1127 Genera suggesting a Flora, or an existing plant collection.

How many pieces were actually completed? Although Lewis Ginter owns 2,500 drawings, the numbers in the collection range from 3 to 5001. Were the plants drawn from live plants or from pressed specimens? Some of the work is aesthetically lovely and so dynamic that it seems certain the artist worked from nature while others seem pallid and lifeless, yet all are signed by Descubes. Could we find a death date? The most recently dated piece is 1919, raising the possibility that our artist died in the influenza pandemic of the early 20th century. The dearth of any published information about the artist and the collection required that we let the work speak. I designed a database to store the extensive botanical information that appeared on each drawing including species identification with a description of the plant, plant distribution locales, vernacular names, and literature references.  It quickly became apparent that the plants depicted were either natives of, or cultivated on, the Indian subcontinent: India (including specific regional names), Pakistan, Sikkim, Bhutan, Nepal, the Himalayas, and the Malayan Peninsula. 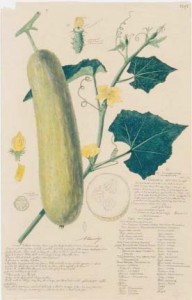 Only 38 of the works were dated, with dates ranging from 1875 to1919. Eight of the dated pieces listed Ootacamund, India, as a location, and six were dated 1912. It seemed plausible that the artist in Lady Bourne’s album (Mons. Descubes) was the same Descubes who signed the garden pieces. It was at least circumstantial evidence that our artist was a man!
In late 2004, I turned up a reference to a Forest Survey map done by A. Descubes, located at the University of Pennsylvania. Tooley’s Dictionary of Mapmakers had a single line reference to A. Descubes: “Descubes, A. Mauritius 1880-(1).” Mauritius, an island east of Africa, had piqued our interest. Twenty of our images listing Mauritius were dated, including the earliest date, 1875. The drawings from Mauritius tended to be among the more finished, more aesthetically pleasing.
Further evidence that Descubes was a cartographer and employee of the Survey of India was obtained from a search of map collections in the UK and Australia. The St. Pancras Map Library, The Edinburgh University catalog, and the National Library of Australia’s catalog all listed Descubes maps. The signature “A. Descubes” is clearly identical to the signatures on LGBG works.

Further research led us to Raymond d’Unienville one of the authors of Dictionnaire de Biographie Mauricienne (Dictionary of Mauritian Biography), who suggested that our artist was likely Alexandre Descubes, a cartographer who started his career as a draughtsman in the public works department in 1874. Descubes’ 1880 map of Mauritius is a masterpiece still used by land surveyors. There are about a dozen maps he signed, all well known.
In 2006, a review of Mauritius Blue Book 1881 to 1885, states he was born in Mauritius in July 1850, May 23, 1874, he was appointed as a draughtsman in the Public Works Department and in 1882 he resigned. Scans of the relevant pages of the Colonial Blue Book of Mauritius were obtained from The British Library. The High Commissioner of India in Mauritius gave Descubes’ birth date as July 17, 1854, and his date of “Commencement of Service for Pension” as January 18, 1887. And so, it is likely that our artist was of French colonial descent. His piece No.4403  Saccharum officinarum gives plausibility to this speculation. It is a portrait of sugar cane, with the notation on the back: “List of the different varieties of sugar cane growing in the Mauritius.” Eighty-three different varieties of names follow. 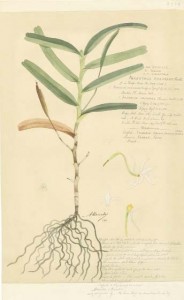 We have yet to determine why Alexandre Descubes created these works. Because the pieces have extensive writing on them, they were clearly not intended to be engraved, or published. The connection with Lady Bourne suggested to us that Descubes might have been illustrating the Bourne’s collection. However, in January of 2009, it was disappointing to discover that the Descubes ID numbers did not match the Bourne accession numbers.  I’m hoping that someone will find us, and be able to answer our lingering questions.
Due to space constraints, many details of this fascinating search for an artist’s origins were edited. To find out more, or if you have clues or questions about this treasure trove of botanical art, please contact  Lewis Ginter Botanical Garden.