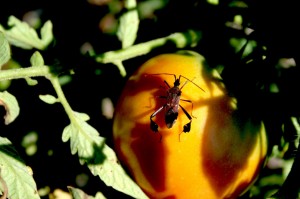 This post is course number “102″, following the Entomology 101 course recently experienced in-depth with the Squash Bugs. After the Squash Bug assault, to put it mildly I’ve become more attuned to the presence of insects in the vegetable garden. Normally I completely ascribe to the “Let Nature Take It’s Course” philosophy, but sometimes giving the critters a little competition is only fair – if you want/need to protect your crops for the benefit of others. 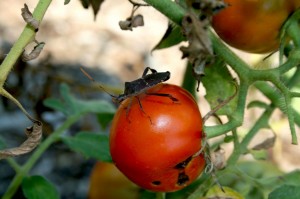 Leaf-footed Bug 1? Yep, it's big, but the tomatoes are getting smaller this time of the season.

When I spotted these critters on the tomatoes my first thought was Stink Bugs, but they’re larger, longer-legged and more narrow in shape. A little Internet research suggested the body type was much like the Western Conifer Seed Bug, which has migrated to the East Coast. Another gardener suggested Assassin Bug, but the legs and markings are different. The same gardener also suggested Leaf-Footed Bug, because of the hind legs, and I think that’s the key.

It also explains the discovery of the red nymphs by volunteer tomato-pickers last Saturday. They were convinced the little red insects were Fire Ants, and promptly lost their zeal for working in the garden. I tried to dissuade them, but didn’t have the capacity at the moment to provide a specific identification. I’m pretty sure those nymphs are part of the Leaf-Footed Bug family. There’s still a little uncertainty, because the markings on the adult’s back aren’t precisely the same as examples found on the Internet, but again, it’s the hind legs that are probably the key.

Bottom line, hopefully these creatures don’t swarm like Squash Bugs, and their desiccating impact should be minor, leaving small black spots on the tomatoes that are relatively shallow.