I am very fortunate to be traveling by coach from Amsterdam to Maastricht in the Netherlands (or Holland as we often call it). Though we’ve been in the country for 3 full days, I am just now able to take time to log some of our journey.

I am one of nine on Lewis Ginter Botanical Garden’s trip:  Holland – 100 Years of Horticulture, led by Frank Robinson, the Garden’s Executive Director, and Edwin Groeneweg, our Dutch guide. While we’re here to enjoy the country and experience the culture, we have a specific focus on the horticulture and plant development of Holland – and often how it has affected our plant world in the states and at the Garden.

On our first day we walked through the Floating Flower Market in Amsterdam. The cut flowers were amazing, many of the amaryllis bulbs were two to three times larger than any we’d ever seen and the tulips came in batches of 50 for €8 (Just under $10)!  “Expensive,” said Edwin. I was so excited to see my favorite flower, peonies, in bloom as well. Too bad we can’t bring any back! 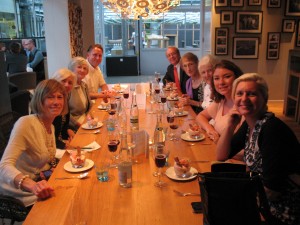 Saturday we took a trip to Hortus Bontanicus – one of the oldest gardens world-wide with over 6,000 plants growing on less than 2 acres. It was originally created as a school and study lab for doctors and botanists during the period of the plague in the early 1600’s. Today it’s a popular attraction, though still very much a study garden made more for viewing individual plants rather than sweeping landscapes.

That night we went to one of the most amazing restaurants I have ever been to – Restaurant De Kas, the ‘greenhouse restaurant.’ You dine in a greenhouse-like setting and most of the produce and herbs are grown on-site. The chefs prepare meals based on what’s in season and blooming behind the restaurant. (I was proud to tell one of our group members, who is from Illinois, that we have a Community Kitchen Garden at Lewis Ginter, and that our local food bank does the same thanks to our deliveries.) I’m getting hungry as I remember the outstanding white and green asparagus — the signature veggie of the Netherlands. De Kas also uses herbs and edible flowers from their grounds – we had a colorful bloom in each course, a thyme blossom in our champagne.  We had five courses but it was so light and fresh we were able to walk out without wanting to undo the top button – Yum! 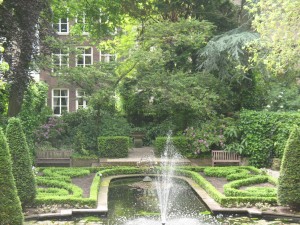 Sunday, we met up with garden designer, historian and tree expert, Andre Ancion. He led us through the city of Amsterdam and into a spectacular private house and garden, Geelvinck Hinlopen. I was surprised by the size of the garden compared to the view of the row homes from the canal. This particular house is a double canal house, noted by having 5 windows facing the canal instead of 3. The garden design really allowed for the maximum plant space and some asymmetrical design that was quite stunning.

From there we walked to an area called the Begijnhof (“be-gyne-hof”).  Started in the 1100’s, it was a community of women who lived similarly to nuns though they didn’t take vows. They were usually well-to-do women who chose to reside in a gated court and live a life of social work to benefit the community.

Frank and I  believe there is connection between the life of the Begijnhof women and Grace Arents, Lewis Ginter’s niece,  who stated in her will that  Lewis Ginter Botanical Garden be developed as botanical garden honoring Lewis Ginter. Arents never married and dedicated her life to giving to others –- she gave her time and money to many Richmond causes.  There are architectural details in and around the courtyard that are similar  to those at Lewis Ginter’s own  Bloemendaal House (meaning “valley of flowers” in dutch). Also, there was a women names Cornelius Arents who lived in the Begijnhof!  Unfortunately, Grace had her personal records burned when she died and we cannot be sure a true connection exists.  We do feel pretty confident in assuming that she did, at least, spend time here in Holland.
Continuing on, we caught our early morning bus and drove over to the flower auction –- Flora Holland -– in Aalsmeer, near the airport. We had to arrive early because the auction begins at 6 a.m. and ends by 10 or 11 a.m  each day. Flora Holland auctions 45 million cut flowers and 2.5 million potted plants per year in a warehouse of over 1 million square meters! It is the largest trade building in the world –the wall street of plants. Flowers are priced by the stem (up to €1 each) and auctioned in sets of bundles by the Dutch Auction Method – starting high, buyers ‘buz-in’ their price as it falls and the first to buz gets the flowers.  It seemed like we walked for miles as we toured the auction rooms, watching class 1 plants pass through on trolleys and sell to the highest bidder, strolled the catwalk for a top-view of the bustle of trolleys going to auction rooms, getting sorted, and leaving the building to meet their buyers, and (quickly) visited the store rooms kept at 3-8° for the overnight storage of plants before auction. We were all momentarily dumbstruck and in awe of the process – and then we shook our heads, smiled and cooed over the freshest, top-notch flowers in quantities of thousands we’d ever seen. It was truly a sight to behold!
I can’t imagine how we can top the past few days, but the itinerary looks promising and I am learning so much. Edwin just said we have 20 minutes left on the bus and we are getting off to tour the Castle Gardens of Arcen – a large garden with over 10,000 roses, an Italian garden and a water garden. What an amazing trip!

The Garden periodically arranges botanical-theme based travel. The next trip, Chicago:  Emerald of the Midwest, is slated for Septemeber 2010.  Our adult education web page has more information.  Leave a comment if you have a suggestion for a trip!