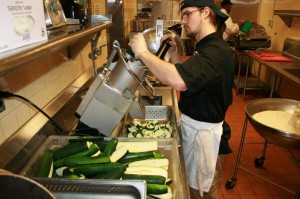 Steve Brock, a culinary pro, feeds the pre-trimmed squash into the chopper. This fall Steve is headed to the Culinary Institute of America in the Hudson River Valley of New York. Best wishes to Steve in his culinary journey. 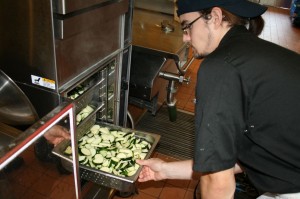 Steve stacks the squash in the steamer. 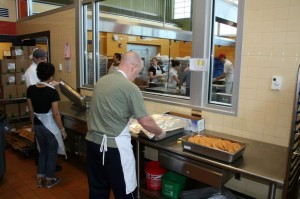 This is just one part of the facility. It's all hustle & bustle, preparing as many as 2700 meals per day for school kids, not to mention the Meals on Wheels program. 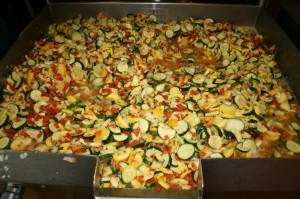 The final result: Buttered squash with tomatoes. This looks irresistible - and I don't even like squash!

The Lewis Ginter Community Kitchen Garden (CKG) provides fresh produce to FeedMore  — the umbrella organization coordinating the Central Virginia Food Bank, The Community Kitchen and Meals on Wheels  of Central Virginia. Talk about thinking local: the CKG is 4.5 miles from the FeedMore facility. That means the produce is fresh, higher in nutrition and the consumption of gasoline is minimal.

Sally Pluot, VP of Food Services for FeedMore,  granted access to the Kitchen this morning so we could see the CKG produce being put in use. The Community Kitchen is an impressive operation – sparkling and PRODUCTIVE. An impressive stat: 77 percent of the hands-on labor is volunteer. 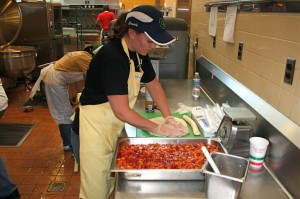 "If you eat your squash, you can have cherry & peach cobbler for dessert." Shannon Elsea - a Henrico County elementary school teacher - volunteers to prep the cobbler. Who says teachers take the summer off? We're not producing any true fruits in the CKG currently, but it's something to consider for the Strategic Plan.