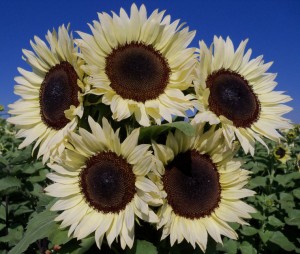 Hybrid technology has led to new varieties of a favorite garden classic, including this Coconut Ice sunflower, which shows off a creamy white flowerhead. Credit: Seed Sense

Mention “smiley-face flower” and what comes to mind? Probably the sunflower, a towering native plant of the Americas. The sunflower (Helianthus annuus) is more than a single-stem beauty with a golden flower head. Its history spans thousands of years, and in recent decades, hybridization has altered the world of sunflowers in countless ways. Today, the species has new kin, as well as new looks.
Recent varieties vary dramatically in height, from traditional garden giants that sometimes reach 12 feet tall to dwarf varieties that are suitable for container plantings. The well-known sunflower has a single hairy stem, while modified varieties boast seven to 10 stems per plant. The mature flower head, which is a crowded composite of multiple smaller flowers or florets, ranges from dinner-plate size to a mere inch in diameter.
Though most flower heads boldly face the sun, some hybridized varieties droop downward, making it easier for birds and wildlife to snatch the seeds. The native plant is an annual, but some of today’s domesticated plants are perennials that self seed and return year after year.
Perhaps one of the most notable changes is the sunflower’s new range of colors. While sunflower fans are used to golden-yellow hues, hybridizers also have introduced ornamental varieties with ruby-red, bronze and white flower heads.
Along with its appearance, the sunflower’s uses have expanded. Native Americans harvested the plant for practical purposes, such as food, dyes and medicinal ointments. In more recent times, the sunflower has become a fashionable icon for home décor and jewelry.
The sunflower also has commercial uses. Its leaves can be used for cattle feed, its fibrous stems for paper production and its oil for livestock feed. Because sunflower oil is often cheaper than olive oil, it also is used in the production of cooking oil, margarine and some alternate fuels. 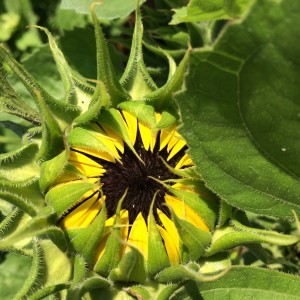 A sunflower just starting to bloom along the Main Garden Path

What hasn’t changed? The sunflower’s love for the sun and our love for its summer beauty.
Tips for growing sunflowers
• Seed one crop, then two weeks later seed another close by. Plants will mature at different times, extending your garden’s overall bloom period.
• Plant sunflowers to attract pollinators to your garden.
• Watch out for imposters, unless you like them as well. The false sunflower (Heliopsis helianthoides) and the Mexican sunflower (Tithonia rotundifolia) are from different plant species.
• Daisies and asters are excellent complements to the sunflower garden.
• Sunflower varieties with small, multi-blooms can be deadheaded (spent blooms removed) to encourage more blooms. Conversely, tall varieties are typically single bloomers, so either harvest their seeds or leave the flower heads in the garden for wildlife.
• In some areas of the U.S., commercial farmers equate perennial sunflowers with weeds since they can negatively impact edible crop yields.
• Sunflower seeds, leaves and stems emit substances that inhibit the growth of certain other plants, so separate them from crops such as pole beans and potatoes.
• When positioning bird feeders, keep in mind that the hulls of the sunflower seeds emit toxins that might build up and kill underlying grass over time.
Editor’s Note: This article first published in the Richmond Times-Dispatch, in June 2014.