Several years ago, Lewis Ginter Botanical Garden did a survey and asked members what kind of exhibits they would like to see at the Garden. Of the 469 people surveyed, 81% replied they’d be interested in an installation of outdoor art/sculpture.

Lewis Ginter Botanical Garden is bringing the extraordinary glass sculpture of Hans Godo Frabel to the Garden next year. The exhibit Reflections of Glass will run April 1, 2010 through January 10, 2011. 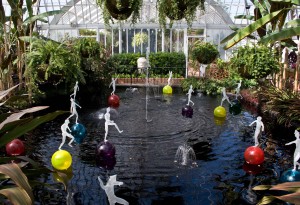 Frabel is known as one of the world’s preeminent glass artists. Collectors of his work include Queen Elizabeth II, the Emperor and Empress of Japan, and President Jimmy Carter. He gained international attention in 1978 when his pop art sculpture “Hammer and Nails” was featured in the New Glass Art Exhibition touring major museums around the world. Some may also recall his “Cavorting Clowns” sculpture in Absolut Vodka ads in the late 1980s and early 1990s, putting him in the company of Andy Warhol and Keith Haring.

What will people see in Reflections of Glass at Lewis Ginter?
More than one hundred pieces comprise the exhibit, which ranges from the realistic (brightly colored frogs and intricate portrayals 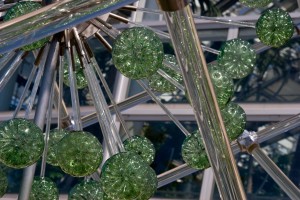 of orchids, lotuses and waterlilies) to the whimsical (“sprite-like” figures, masks and large-scale geometric shapes. Smaller pieces will invite viewers to step in for a closer look while larger ones will amaze with sheer impact. In all cases, Frabel’s work “plays” with its surroundings – offering ever-changing views. 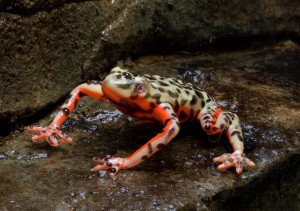 Lewis Ginter Botanical Garden provides an intimate setting for these jewel-like sculptures and visitors will enjoy playing their own games of “I Spy” as they are surprised and delighted by fanciful forms at every turn. Sculptures will be featured both indoor and out-of-doors. 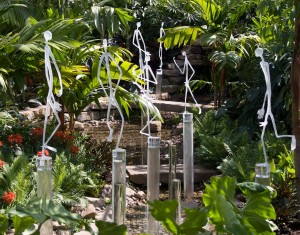 Adding to the ephemeral nature of the work will be the complementary botanical displays changing throughout the seasons, starting with A Million Blooms in the Spring. The glittering Conservatory will offer the fantastic experience of “glass within glass” and the exhibit culminates with GardenFest of Lights 2010, reflecting the beauty of more than half a million lights.
This will be the premiere of Reflections of Glass in the mid-Atlantic region. Currently Frabel’s work is showing at the Phipps Conservatory in Pittsburgh, PA.

Our members know their stuff. There is something special about art in a garden – it allows us to see things in a whole new way. Can you imagine how Frabel’s work will “play” in Lewis Ginter Botanical Garden?