Tomorrow is the Green Tonic: Urban Gardening for Health & Wholeness symposium at Lewis Ginter Botanical Garden. And while the symposium hasn’t even started, there is something new that has started: Richmonders are starting to talk about what they want for their future for the city. Richmonders are starting to realize that they have more influence than they think about the city’s public spaces.   Today, Erik Bonkovsky, of RVAnews, published an interview with Drew Becher, one of our key speakers for tomorrow’s Green Tonic symposium, and Executive Director of the New York Restoration Project. It is a great read.  And after ponerding it for a while, I’m starting to realize that people in Richmond get it. The James River is like a little diamond for this city –something incredibly wild and  rare in an urban environment and the fact that we didn’t turn it into a Baltimore Harbor or a RiverWalk, might not be all bad.  Bonkovsky says,

Although he’s never been to Virginia’s capital, Becher’s ideas are eerily germane: “People thought stadiums were the Savior. But there’s no silver bullet,” he offers. As an alternative, Becher suggests that an essential part of urban lifestyle is access to hyper-local green space. “Everyone,” he claims, “deserves to live around a Central Park.” Byrd Park cannot alone serve all of Richmond. The James River Park System cannot be the only option for useable green space. “Each neighborhood,” Becher says, “needs its own village green, its own little Central Park.”

A positive Richmond micro-example of this approach is the current renewal of Paradise Park—a Fan ‘pocket park’ bordered by Floyd, Grove, Allen, and Vine Streets. All volunteer Friends of Paradise Park is catalyzing redevelopment of the space, working alongside the City Parks and Recreation Department to restore and re-program it.

The ongoing programming of green space is almost as important as its restoration, says Becher. NYRP parks are open from 8 AM to 10 PM, filled with a dizzying schedule of camps, festivals, arts, and activities.

Best of all though, in my opinion is that we have something way better than Central Park. We have the River!  Not only that but we also have , Lewis Ginter, pocket parks, Maymont, Triangle Parks, and vacant lots that can be turned into great parks.

RVAnews is not the only one thinking about and planning greening for our future. The urban greening movement is going from micro-local to national. This morning, my daughter and I spent some time volunteering at the restoration of Paradise Park. Paradise Park (or Geo Park) is a park in the Fan that is getting a facelift (and with the help of some social media word is getting out, and volunteers are showing up). My 8-year-old daughter and I spent time making leaf print murals and getting to know new friends.  Parks building community — in action!   (This Saturday, Paradise Park will celebrate the completion of the Mural with a parade and an official park opening celebration. Details are at the end of this post).

Finally, on a national level, there is legislation in the works (co-sponsored by Rep. James Moran)  HR 3225, The Community Gardens act of 2009. Although the bill is only at the first steps in the legislative process, its purpose is a very important one: to help build funds for community gardens.

The purpose of this Act is to establish a program to–

(3) educate and train the public on the importance and value of community gardening.

Maybe it’s just me, but I never thought I’d see a bill like this in my lifetime.  People, even legislators,  finally really get it! Whether it is a visit to Lewis Ginter Botanical Garden, gardening at your community garden vegetable plot, or taking a walk at Pony Pasture, guerilla gardening, or creating your own urban garden out of a nearby vacant lot people need plants! 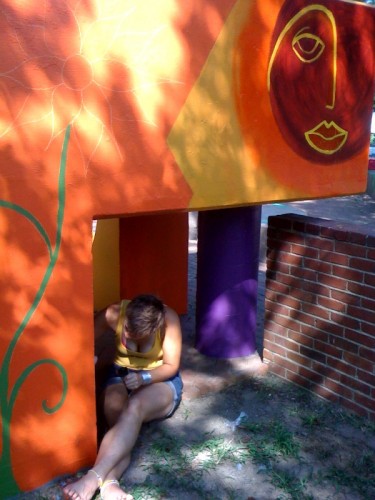 ~ We’ve worked hard on our mural and we want YOU to come celebrate it! ~

NO BS Brass Band will be there to march us out (YES!) around the blocks bordering the park and back in for more dancing, crafts and food!

Come early to check out the mural, grab a bite, make a shaker at the Visual Arts Center craft table to march with and check out the Art on Wheels www.artonwheels-va.org mobile printing press – yes it really is on wheels! The Visual Arts Center will bring along a giant parade puppet to march with—please feel free to bring your own and if you do not know how to make one, join their class this week “Giant Parade Puppets” ages 8 – 12 Aug. 3 -7. www.visarts.org

We can’t wait!! Come celebrate with us! We made a mural!!

Entrance is through the alleyways on N. Vine or N. Allen.

Friends of Paradise Park would like to thank their partners for making this project possible: City of Richmond Dept. of Parks & Rec. who in turn brought fantastic Jet Blue volunteers to us for the project, Richmond Rec. & Parks Foundation through Board Member Diane Hayes of Mural Arts Program – our resident artist!, the Fan District Association and City of Richmond Police Third Precinct. This event is free and meant to celebrate positive movement in the park and to act as a catalyst for future programming throughout the year in the park. Money raised will go toward programming. Come find us! We are one of the Fan’s best kept secrets!