How Blue is Blue? 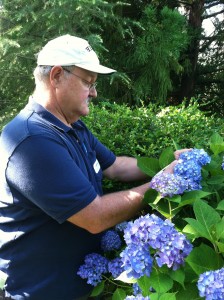 Last week, the hydrangea collection at Lewis Ginter Botanical Garden was used for a research project by Dr. Henry Schreiber, Professor of Chemistry, Virginia Military Institute.  Dr. Schreiber is testing the color intensity of hydrangea sepals in different locations, to see if climate affects them.  In hydrangea blooms, the colorful and showy part of a hydrangea is, in fact, the sepals, not the petals. 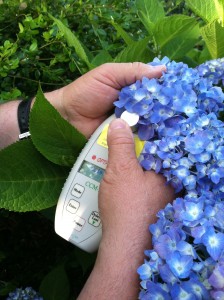 Dr. Schreiber uses a hand-held chlorophyll meter in which the diode is switched from measuring the green in chlorophyll to the red or blue in hydrangea sepals.  This meter measures the micrograms of anthocyanin per sepal, which tells him the color intensity.   The sepal is placed in the machine and the measurement is taken without harming or altering the sepal. 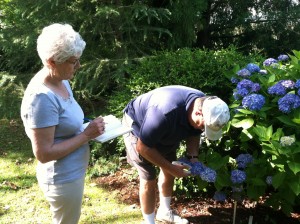 Seven Hydrangea cultivars will be compared at Lewis Ginter Botanical Garden, Virginia Military Institute, and Norfolk Botanical Garden to determine the effect of climate on color intensity of the sepals

Dr. Schreiber tested 7 cultivars including ‘Nikko Blue,’ ‘Glowing Embers,’ ‘Merritt’s Supreme,’ ‘ Endless Summer,’ ‘ Bailmer,’ ‘Tovelit,’ and ‘All Summer Beauty,’ taking 12-15 random readings per plant.  These readings will be compared with the same cultivars at the Norfolk Botanical Garden and Virginia Military Institute to help determine how climate might have an effect on the color intensity.