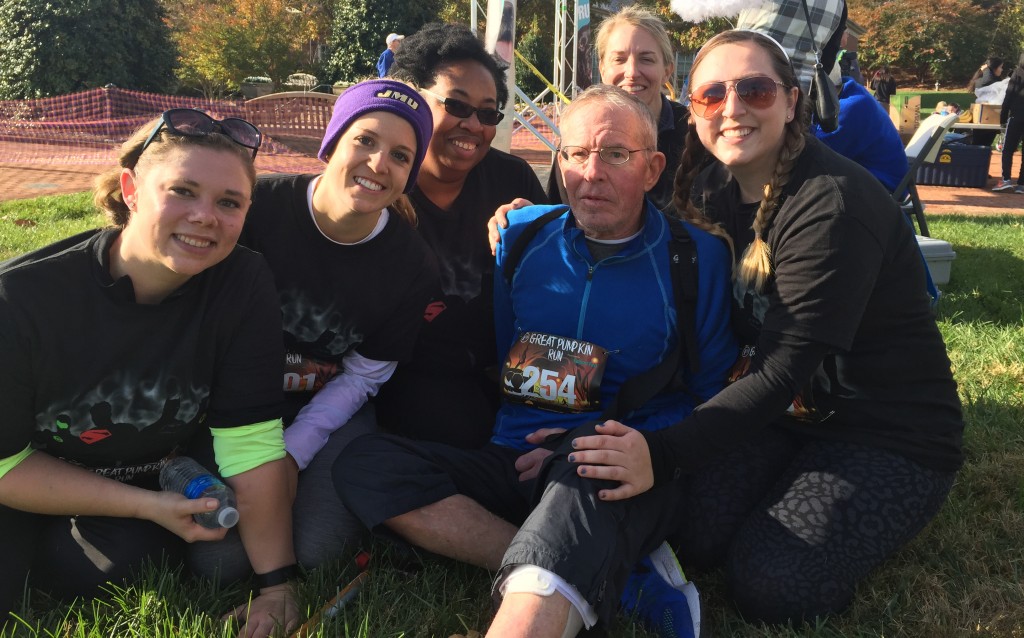 Inspiration: The vital life force that adds meaning to everything we do. It sneaks up on us sometimes in unexpected places. A few weeks ago, I found it in a total stranger.

I got an email from a Garden visitor, Ashley Gordon, who was looking for race photos of her group. She explained she and her coworkers had just helped one of their patients complete Lewis Ginter Botanical Garden’s Great Pumpkin Run 5K, and she wanted to make a photo book for him as a gift. Don Walters moved to Richmond 8 months ago after a stroke so he could be closer to his daughter while he recovered.  He lives in a West End residential treatment facility, WestPort.  The stroke left this former runner in a very different place physically — Walters had to learn to walk again.  And with plenty of hard work and support from his team of therapists, he completed the race, by wheelchair and by walking the last 300 feet. When I heard about Walters, I knew immediately I wanted to meet him.  So on a Sunday afternoon, Walters, his daughter Amy Walters, and Walter’s entire rehabilitation team showed up to chat with me at the Garden.  Wow, I had never seen so much love. I really didn’t expect his whole crew of therapists to show up on on their day off.  Walters made quite an impression too.

The first thing  Walters asked me when I met him was if I’d been to New York Botanical Garden. “No,” I said, “But I’m a huge fan of their social media and the photos look gorgeous.”

It was easy to see why he had such a following.

Many of us are surrounded by love. But, typically this love comes from parents, or children or siblings.  Or maybe from good friends that we’ve known for years, even coworkers. But here it was different. Physical therapist assistant Ashley Gordon, occupational therapist Lauren Doss, speech pathologist Heather Jamer, and certified occupational therapy assistant Nicole Totten have a deep love for Walters and the feeling is obviously mutual.  Even I, a stranger,  immediately felt an a connection with Walters and was completely inspired by his attitude and what he’s been able to accomplish in the past 8 months. 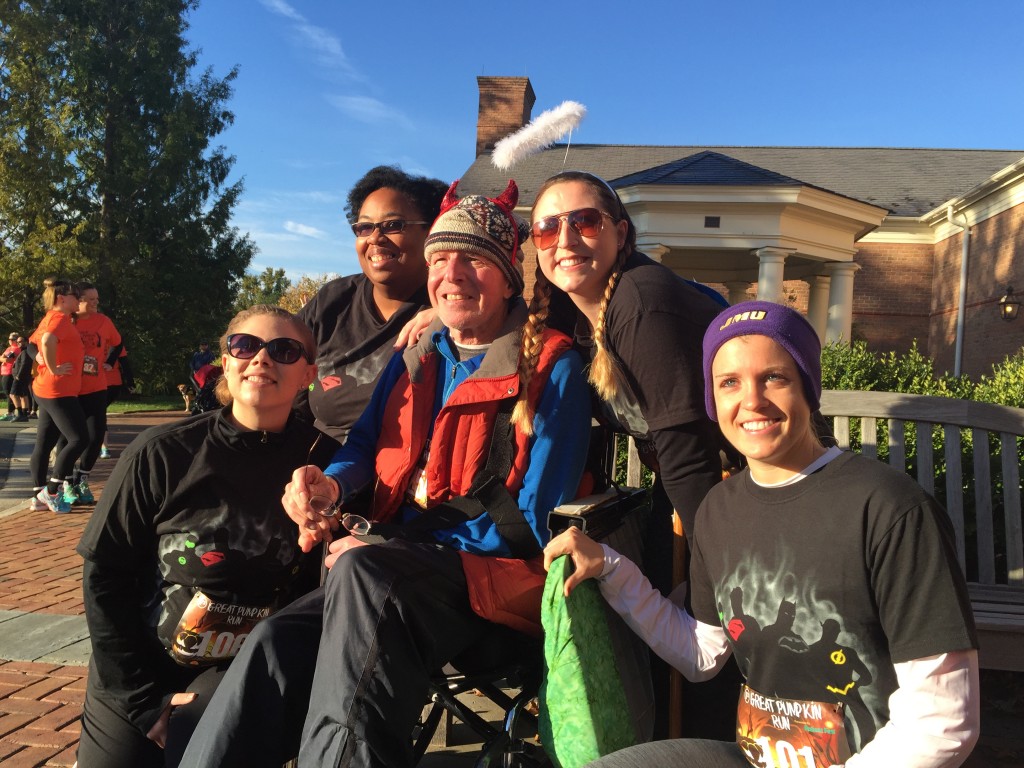 The area of Walters’ brain where injury occurred has affected his impulse control, executive function, directions, and social norms, Lauren Doss, his occupational therapist explained.  “The lack of impulse control was causing some concerns for his safety. His brain was working so fast he wouldn’t hear you in time to listen,” Doss explained.  But oh, how far he has come.  It might be hard to imagine just how far.  To give you an idea, after his stroke Walters preferred to speak in Spanish rather than English.

“As his speech therapist it was really challenging,” said Heather Jamer.

His speech after the stroke was very telegraphic,  she explained, omitting unnecessary words like “a,” “the” and “of.”  Even now, Walters occasionally slips into a banter of lists. The day I met him he rattled off  very frankly his range of emotions: miserable, energetic, happy, utopia. And even though his stroke was on the right side of his brain, his language center (on the left side) was affected. That’s how severe his stroke was. 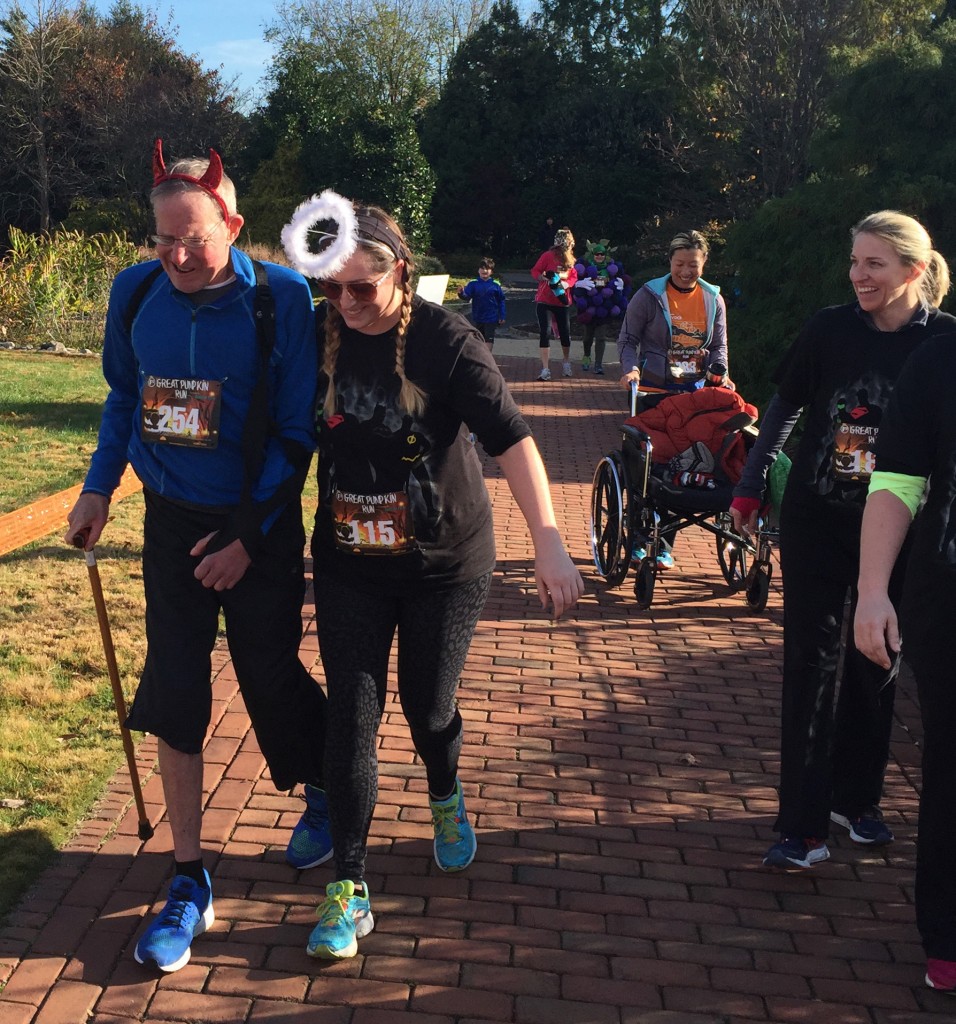 “Don is truly an inspiration. He’s been the hardest worker I’ve ever seen in my 2.5 years at WestPort,” Gordon says. And perhaps that is the best testament. These are the people who have watched his journey and his progress and they have documented each turn.  Gordon showed me a video of Walters on his third day in Richmond, partially to illustrate his progress, and partially to share a funny story. In the video, Walters is wildly swinging a lasso over his head.

“We found out he worked on a ranch and I guess that is right where our mind went: cowboy!” In actuality, Don Walters managed and developed perennial gardens in Montana at Shooting Star Ranch, and was not a cowboy at all. Walters playfully describes the ranch as 5,000 acres of grizzly bears, mountain lions, 20 degrees Fahrenheit, lots of snow, with 67 miles of dirt road.  He also describes it as majestic. He showed me a slide show of many of the beautiful gardens there featuring lupine, Gaillardia (blanket flower), bee balm, poppies, Rudbeckia (black-eyed-Susan), shasta daisies and roses — all plants we have here at Lewis Ginter.  He explained that in his work he partnered with Montana State University in a native grasses study. Right up our alley!

In addition to being a plant lover and gardener, Walters has always been an avid a runner. His daughter Amy, who is also a Garden member said, “The first thing he did when he woke up from the stroke was to ask for his Nike Pegasus shoes, size 11. But they wouldn’t even let him get up for a week.” When they did let him get up and move about, she explained, one of his first outings was here. 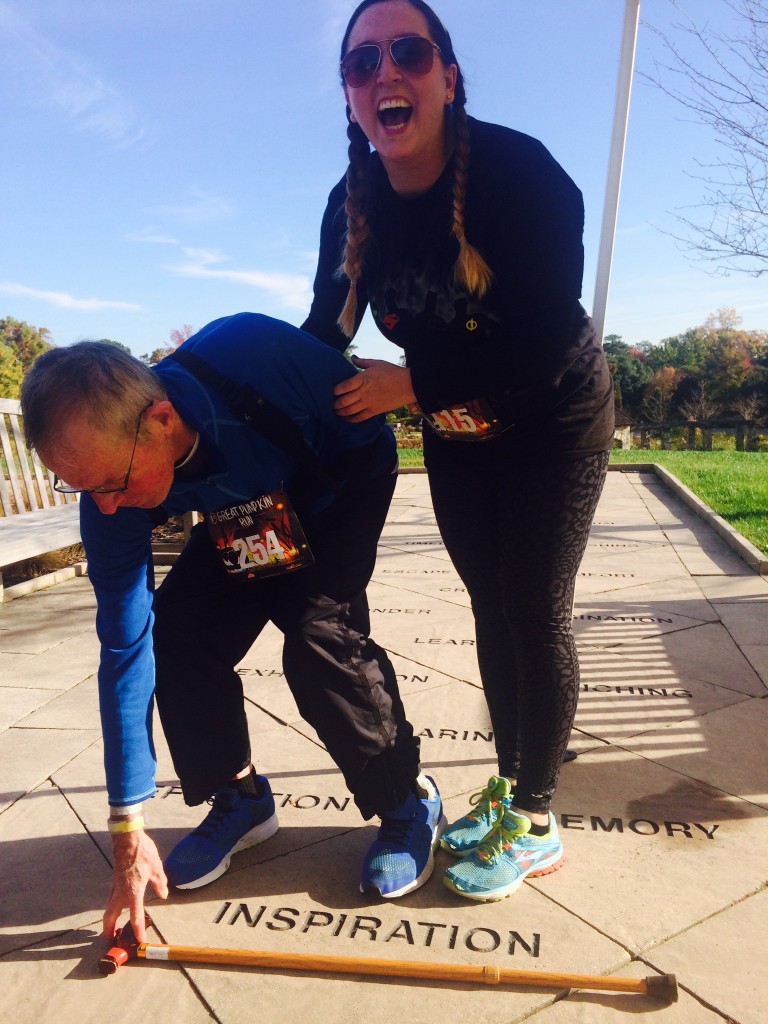 Sitting and chatting with Walters, he alternates between his humble reality and hope. He has a clear vision for where he wants to be, for where he sees himself. He switches between joy and sadness in a matter of seconds.  “I’m going to run within 2 weeks,” he says.  When I give him a look of surprise, he confirms: 2 weeks from today.  At the same time he concedes: “I have not run in 2 to 3 years. Discouraging. Depressing.” The 5k  race here at Lewis Ginter Botanical Garden turned out to be a perfect fit for of combination of Walters’ interests: plants and running.  I knew Walters was a frequent visitor here when happily gave me suggestions for a few plants we should add to our collection. 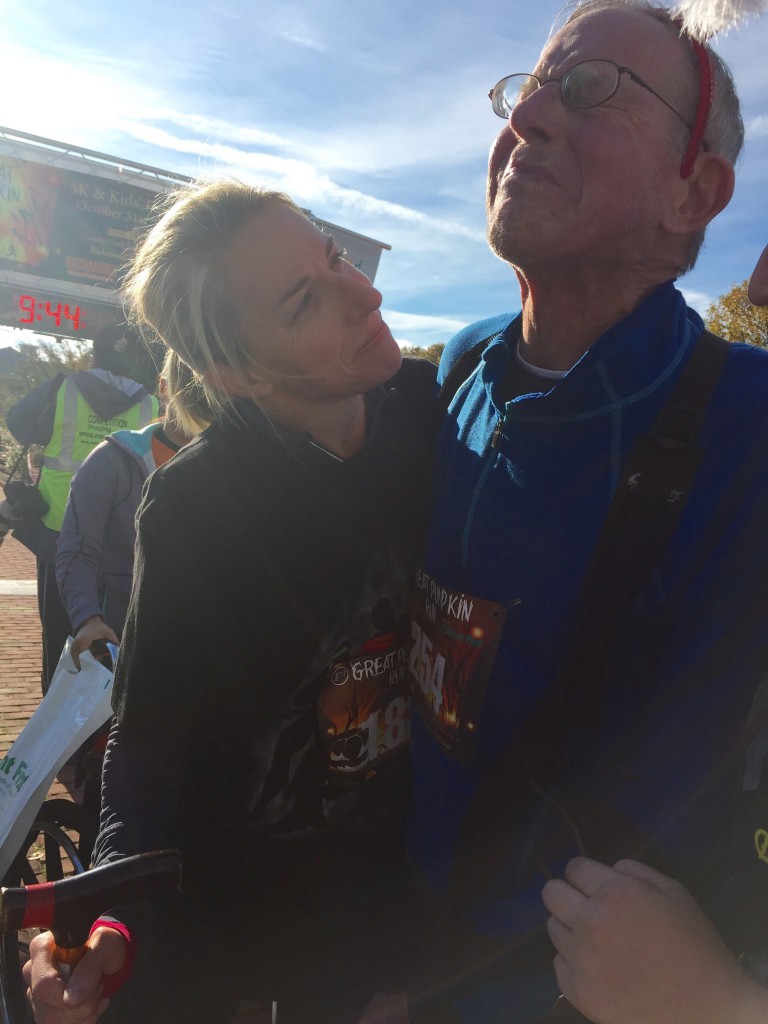 Daughter Amy Walters supporting her father during an emotional moment. The stroke affects Don Walters’ emotional state, sometimes allowing him to swing from extreme happiness to sadness in a matter of minutes.

Some of us may find it hard to show heartfelt love to those we just met or to those we serve. In much of today’s society, it seems there’s more and more a focus on other priorities. But this very special team providing support and therapy to Don Walters has no such trouble.  “The race was one of the best days of my life,” says Gordon without hesitation.  Nicole Totten, Walters’ Certified Occupational Therapy Assistant,  who learned that Walters used to practice yoga and quickly incorporated it into his therapy routine, simply states, “I was blessed with Don.” Lauren Doss chimes in, “You’ve come a long way Don. A very long way.”

In this group where Walters inspires so many with his attitude and hard work, where does his inspiration come from? To me it’s obvious that first and foremost is his team of supporters.  I guess this comes as no surprise. This is now love works.

Coincidentally, in the weeks before I met Walters I had been reading the New York Times bestseller “My Stroke of Insight” about stroke recovery. This passage caught my eye:

“Recovery was a decision I had to make a million times a day…it was critically important that I be surrounded by competent and attentive caregivers. Otherwise, frankly, I probably would not have bothered to make the effort… Recovery, however you define it, is not something you do alone, and my recovery was completely influenced by everyone around me.”

So, what’s next for the amazing Don Walters and his team? The Monument Avenue 10K — 6.2 miles! 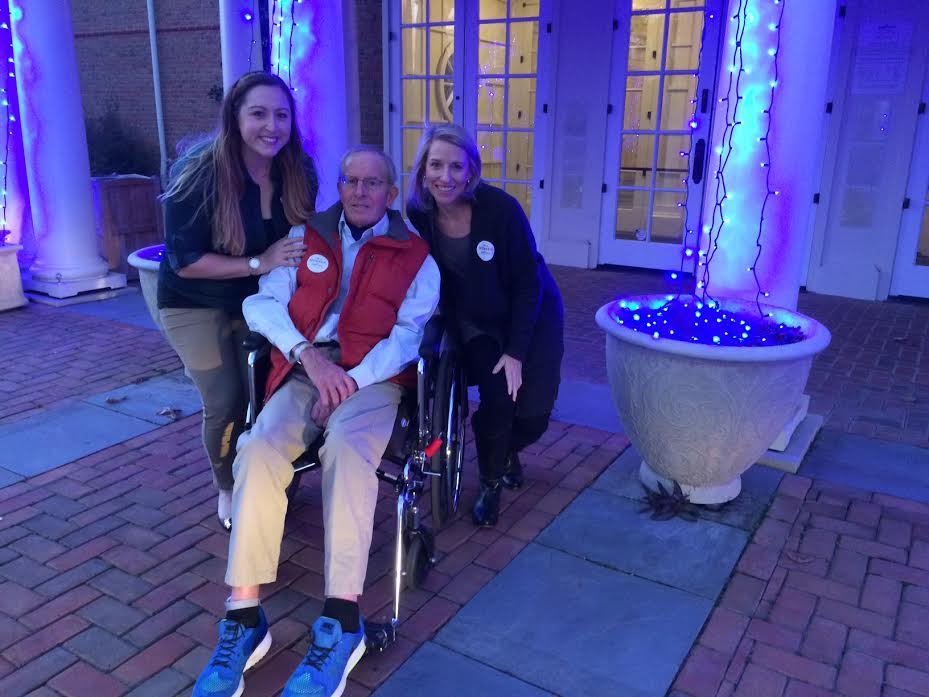 Ashley Gordon, Don Walters and Amy Walters just after we met. They say they plan to come back to see Dominion GardenFest of Lights.

“The plan is to walk the last half mile,” Gordon explains.  Training starts Jan. 18th with Sportable.  Also, Ashley Gordon and Amy Walters tells him they plan to bring him back to the Garden for Dominion GardenFest of Lights.” It reminds me of Rockefeller Center,” he says.

Totten chimes in,  “And you’ll have to make sure you have hot chocolate.” 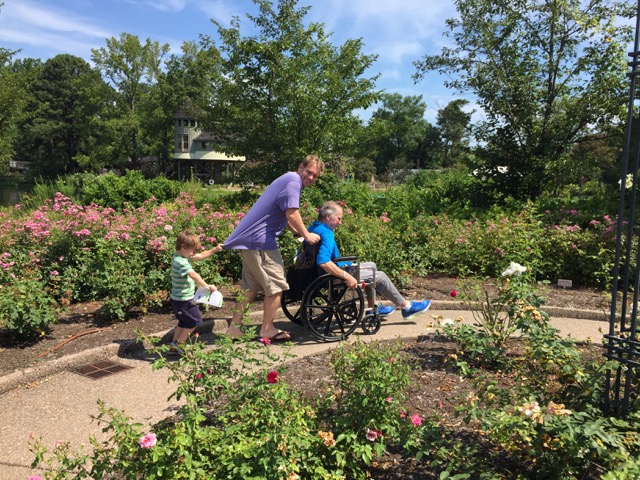 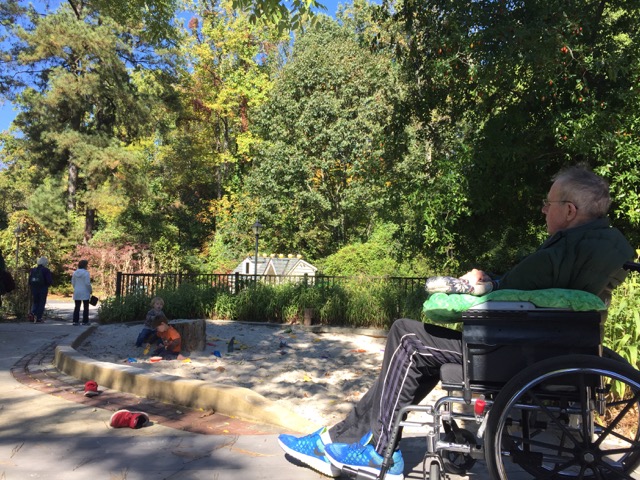 Don Walters with his grandchildren in the Sand Play area of the Children’s Garden. 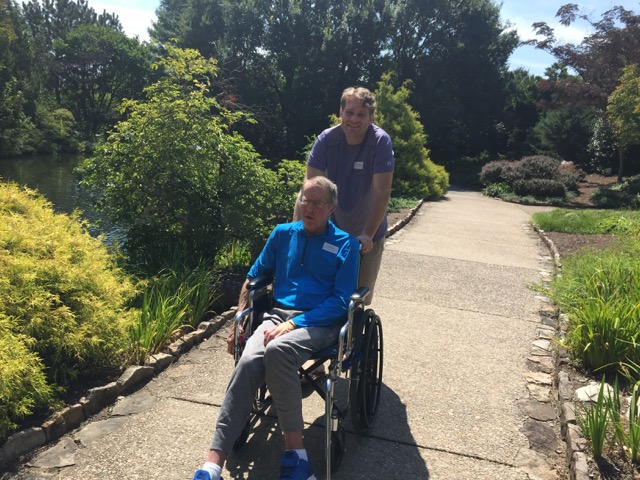 Don Walters and Eric Wirt taking in the Asian Valley. 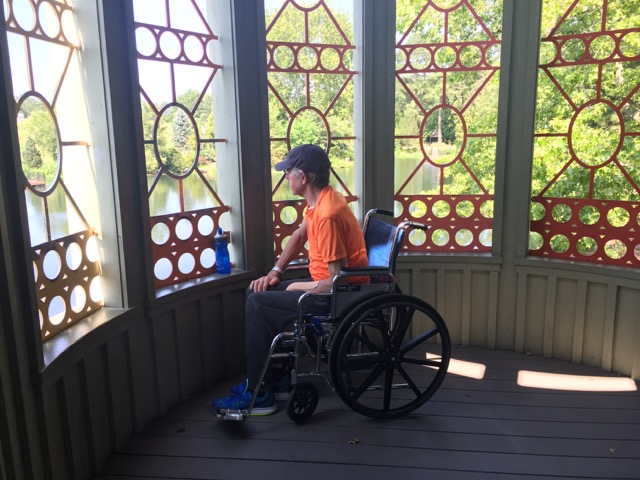 Walters enjoying the view from the CWDKids Tree House.