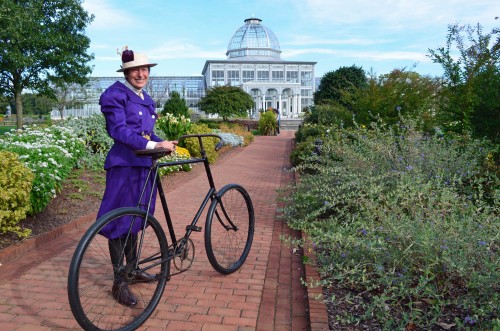 Cycling from the past to the future, Garden volunteer Sherry Giese wears an 1890s-inspired woman’s bicycling costume and wheels a vintage bicycle from the same era. The costume was sewn from a historical pattern by Garden volunteers Mariette Norbom and Betty Woo.

by Shane Tippett, Executive Director, Lewis Ginter Botanical Garden
120 years ago, Richmond was swept up in a national “bicycle craze.” The popularity of cycling soared with the arrival of safe, affordable bicycles, available to all ages and genders. The fervor of the times prompted changes in the activities of women and their fashions, spurred communities to pave local roads and birthed hundreds of cycling, or wheel, clubs. If not the first, certainly the finest Richmond structure housing a cycling club at the time was the Lakeside Wheel Club building. It was located on the west shore of the lake at the heart of businessman and philanthropist Lewis Ginter’s Lakeside Park, just north of his eponymous suburb.
30 years ago, Lewis Ginter’s eponymous botanical garden was founded. This gift to the community was provided by the bequest of Ginter’s devoted niece Grace Arents, another noted Richmond philanthropist. The structure housing the former Lakeside Wheel Club was still here, but greatly transformed. A second floor was added for an infants’ convalescent hospital about the time of the First World War. Renamed “Bloemendaal” (Dutch for “Valley of Flowers”), the house became a private residence for decades, then a workspace for the City of Richmond staff working on site. We now hold special events in Bloemendaal House and use it as a workspace, as well.
In 2015, Richmond again will be swept up in an international bicycle craze, as the UCI Road World Championships come to town in September. Some things will be the same as in the 1890s: the city is working hard on plans for improvements to local roads to accommodate competitors. We shall embrace the “craze,” making all our global visitors feel welcome, with extended evening hours at the Garden during the entire event. Some things will be different: cycling clubs are not so common. As a consequence, the Wheel Club, always at the heart of our Garden, has been rising up in our thinking about this anniversary year. That history is woven through this year’s Dominion GardenFest of Lights: “A Legacy in Lights,” 120 years from Bicycle Club to Botanical Garden. Some things will be radically different from over a century ago, when women fought bias to enjoy outdoor activities and wear suitable clothing for their activities. Of the Garden’s nearly 90 employees and 600 volunteers, three in four are dedicated women. Whatever today’s fashion statement for active women, we are proud that it begins with a Garden name badge.