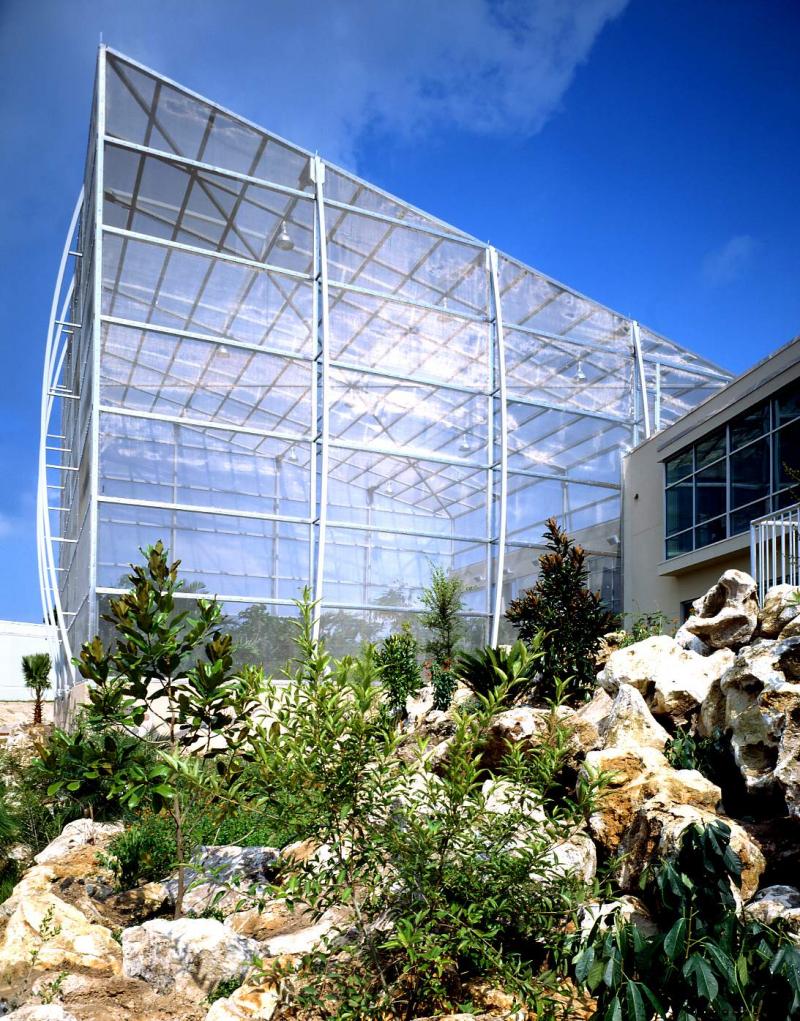 After spending an afternoon listening to him, I can tell you: Jaret Daniels, Ph.D, Head of Programs and Exhibitions at the Florida Museum of Natural History, wants to talk about Lepidoptera.  In 2004 the museum opened up the McGuire Center for Lepidoptera and Biodiversity. The building was attached to the side of the original museum, but the bulk of the space was turned into a 6,400 square foot open air atrium to hold their living Lepidoptera taxa (taxa = species). The goal of this atrium was to create a place where all of the Lepidoptera would behave naturally and be open to the natural Florida environment. Far from being a blank concrete slab with some fruit strewn around (the stereotypical bare minimum environment for scientists)  the atrium is fully landscaped with water elements and native flora and fauna, including insectivorous and flightless quail. At the end of the path through the atrium, you are greeted by the “clean room” where the staff incubate the shipments of Lepidoptera pupa they receive, with two scientists unpacking boxes and answering questions. The staff at the McGuire Center is probing deep into big scientific questions using the Lepidoptera as a platform. Through observing large-scale changes in Lepidoptera populations they can make hypotheses about climate change, magnetic poles shifting and other worldwide events. It helps that they can reference one of the largest Lepidoptera specimen collections in the country.

Collections are the heart of a museum, they engage the visitor, they present the vast breadth of life to their audience and show the real world component of historical theory. Specimens present a place for scientific exploration, which is very much at the forefront of thought at the Florida Museum of Natural History/University of Florida.  Jaret Daniels and his staff have dedicated themselves to the elevation of  scientific literacy by sticking to scientific vocabulary; instead of caterpillars they have pupa, where there were butterflies there are now Lepidoptera. As you walk through the museum you’ll be greeted by large bay windows, showing scientists at work. The windows provide a peek into lab work, or how specimens are prepared for collections; the goal being to break down the construct of scientists.  You can even look in to Daniels’ lab. At 70 million, the museum is fifth in the world for the number of specimens it holds on site, and has its eye on 25 million more specimens before it’s done. If it can fill up all of that empty space it would compete with the likes of the Smithsonian on a global scale.

Jaret Daniels has crafted a small biome for Lepidoptera with the all of the love and inquisition of a scientific mind. He has  an extraordinary commitment to making the scientific process transparent. If you go to Florida and through the Atrium you may find him releasing new taxa into the atrium, walk down the halls of bay windows you may see him working diligently in his lab. Just don’t tap the glass please.

Join us tonight (September 27, 2012) as Jaret Daniels speaks on “Insect Conservation: Efforts to Save Our Charismatic Microfauna” at Lewis Ginter Botanical Garden at 7 p.m.  Click here to RSVP (by 3 p.m.)   A limited number of walk-up  seats may be available just before the lecture.