It’s high energy these days at Lewis Ginter Botanical Garden as the “Meadowmorphosis” stick sculpture unfolds. While there have been many dedicated volunteers providing support to sculptor-in-residence, Patrick Dougherty, and his assistant, Andy Lynch, there are two volunteers that stand out. 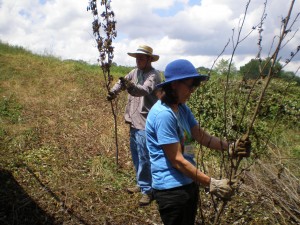 As a Public Relations & Marketing summer intern at the Garden, I have been involved with Meadowmorphosis from the beginning. I met volunteers, Lisa Watts and Chris Corsello, on the first day of the hunting and gathering stage of the project and have felt a range of emotions in watching their progress. Their unique and dynamic relationship inspires me to remain present, pay better attention to the people important to me, and spend less time sweatin’ the small stuff.  And so, I feel compelled to write about them because I want you to get to know them, too.

At first glance, you might assume that Lisa and Chris are a mother/son volunteer team, but they’re not. They met about 10 years ago when Chris was 8 years old and in the 2nd grade. He’s 18 now and attends Deep Run High School. Chris has autism and was paired with Lisa to help him progress. Lisa says she was a bit overwhelmed when initially paired with Chris and recalls being told that he would never be able to speak, write, or work a job. Well, with a lot of hard work and faith in him that he could do more, the duo beat the odds and he can do all three. Sure he has some setbacks, but Lisa explains that as long as Chris has limits, he can understand and work within them. 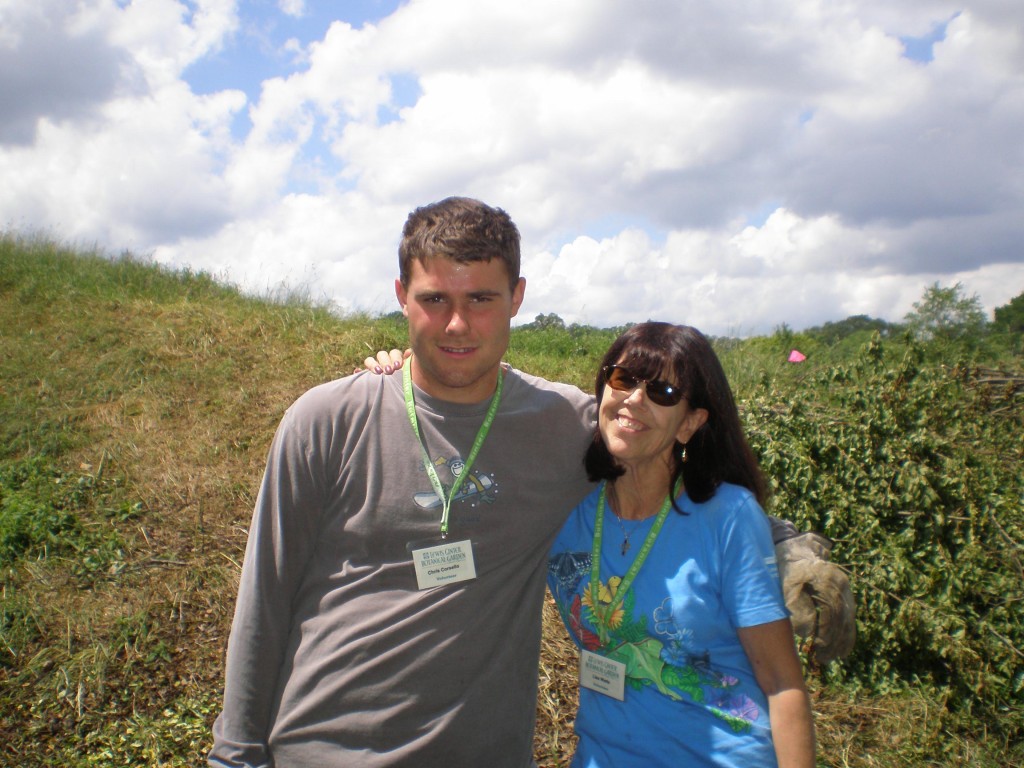 If you’ve been on site for any part of Meadowmorphosis, then you may have heard Lisa and Chris’ interactions. In the beginning, Lisa gave Chris more direction. She offered Chris repetitive directions, sometimes demonstrated the task for him, and offered him praise when he showed he could follow the direction.  Lisa describes having developed expectations for Chris when she says, “If you don’t correct him, he won’t learn. We have to expect his best just like any other 18-year-old. People don’t understand sometimes, but he’s gotten to where he is through perseverance and hard work.” She laughs and adds, “I tell Chris that when we get to heaven, he can let me have it. He can tell me everything that made him mad and everything he didn’t like that I did.” But, for now, it’s sounds like she’ll just keep on pushing him to work at his best.

Chris’ presence is powerful and charming. He smiles a lot and shows his excitement by making hand gestures, laughing, and clapping. He won’t initiate a conversation with you, but he is capable of light conversation if challenged. While I was meeting with Lisa and Chris one day and she was telling me about Chris’ ability to read, write, and spell, I witnessed this firsthand:

I stood there in amazement, blinking away the tears in my eyes, thinking about our conversation on the day I first met them. And as I re-orient myself from our impromptu spelling bee, I tune into the fact that he’s also been working independently alongside all of the other volunteers every day of the Dougherty project. He’s blown the top off of what was once expected of him.

As you can imagine, Lisa and Chris have added something particularly special to this project, including educating the Garden community about autism. Before this project, Dougherty’s assistant, Andy Lynch described himself as being a bit uncomfortable around people with disabilities. But, it has become clear that this experience has changed things for him.  “I really like seeing [Chris] every day.  It’s really cool. He’s doing something [stripping leaves from saplings] all day long that many people would quit doing after 10 minutes.” As Dougherty climbs down from the sculpture, I ask him to weigh in on what it’s been like to work with Chris. He says, “It’s been great. He’s really fit into our crew. It’s worked out for both him and us. They’ve done an amazing job.”

Chris and Lisa. We’ve been humbled and changed by watching, engaging, and working with you. I think it’s safe to say that Meadowmorphosis has taken on a new meaning here at Lewis Ginter Botanical Garden.