Mother Nature is truly amazing, and a trickster too! She created two butterflies that look indistinguishable at first glance to a bird, or to a human. The butterflies I’m speaking of are the viceroy and the monarch. Both, as you see when you look at the photos below, feature orange wings, a black body and veining, and white dots on the wings. As you probably guessed, this look-alike trick is for the sake of the animal’s protection.  But in actuality, they are two entirely different species. Confused? We were too! This all came to our attention because I misidentified one of the photos, but luckily a sharp-eyed observer caught my error so we could fix it.

Go ahead, take a look at the two photos below. Can you tell, from a first glance, which is the monarch?

If you are an expert lepidopterist (or butterfly scientist) you might know that the first photo is a monarch and the second photo is a viceroy. Did the milkweed blooms give it away? The truth is, both the viceroy and monarch enjoy the nectar from milkweed blooms. 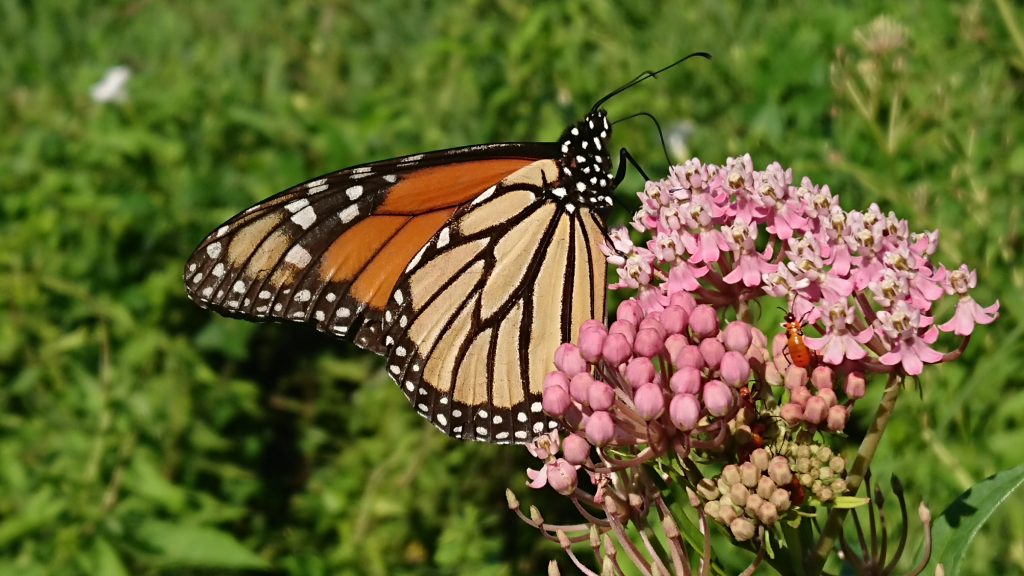 The monarch butterfly (Danaus plexippus), which seems to be more widely known than the viceroy, eats milkweed when it is in its caterpillar stage.  The milkweed is poisonous to humans and to birds because it contains cardiac glycosides, which then also end up in the monarch butterfly. All milkweed (Asclepias) contain
cardiac glycosides as well as other substances that may account for many Native American tribes using them for various medicinal purposes. It’s those same chemicals that make the queen butterfly (Danaus gilippus) and monarch caterpillar taste bad to most predators. The viceroy (Limenitis archippus) uses an entirely different set of toxins from the monarch since they eat willow and not milkweed. Are you starting to get the picture?

So the next question that you might ask is, “Well, if the viceroy tastes bad too, why would it want to mimic the monarch?” We asked Lewis Ginter Botanical Garden resident butterfly expert and butterfly curator Mary Lincoln that very question. She says it’s because it’s a different form of mimicry. “The mimic that it would be if it was in fact, good-tasting and wanted to mimic the monarch to basically lie about what it is.” That is called Batesian mimicry.

“And so that’s what they previously thought the viceroy was,” Mary says,  “But it is now believed to be a different kind of mimicry, called Müllerian mimicry, in which different organisms display similar patterns in order to have solidarity so that a predator will know  –everything that’s orange and black and looks like this is bad not to eat any of them.”

The Monarch vs. Viceroy Difference

So, getting back to the original question — how can you tell the difference? The viceroy has a slightly different pattern on the rear of its wing. While the monarch has river-like vanes of black, the viceroy has those plus one additional line added. You’ll see, in the photo below, a semi-circular line that makes a smile, just below the insect’s body. 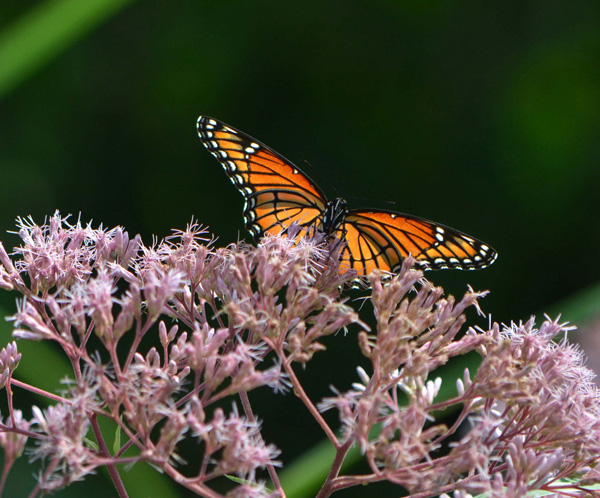 Mary says, “On the viceroy, look for the horizontal line that runs through the markings there’s a black line that goes across the butterfly’s wings. The monarch butterfly won’t have that. So if a butterfly is still long enough for you to be able to see what its wings look like you can tell based on that line if it’s a viceroy or monarch.”

Do you feel like a butterfly expert yet? Now, you can impress all of your friends by telling the difference between a viceroy and a monarch. Just remember the viceroy has a black smile!