This week’s “Dirty Dozen” plant is mulberry weed (Fatoua villosa). In recent years, we have observed this plant creeping into our garden beds at Lewis Ginter Botanical Garden. So far, it has slid under the radar in Virginia, and only California, Alabama and Georgia include this plant in their invasive species lists or laws. We think you should be aware of this sneaky invasive! 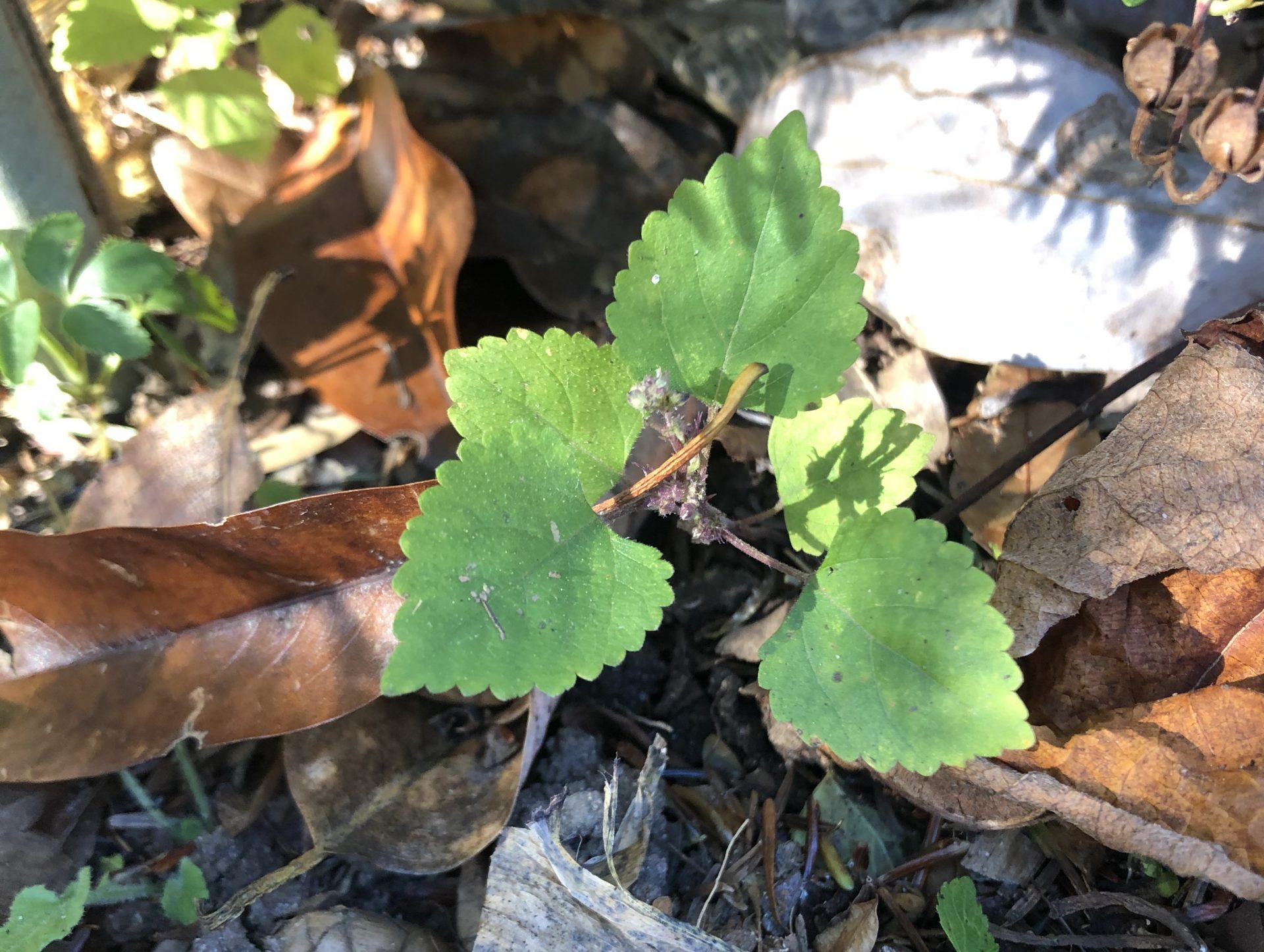 Mulberry weed, also called hairy crabweed, is a member of the mulberry family (Moraceae). This summer annual flowers in late summer and fall.  It grows up to 4 feet tall but may begin prolifically spreading seeds at heights under 3 inches. Its seeds also remain viable in the soil for several years but require light for germination.

Mulberry weed was accidentally introduced from East Asia during the transport of imported goods and/or the return of equipment from World War II. In the United States, it was first officially documented in 1964 in Louisiana. It wasn’t until the 1990s that mulberry weed started causing trouble by “tagging along” with nursery stock being shipped across the country.

Geographic Region: Fatoua villosa is present throughout the eastern United States but is also problematic on the West Coast. You can check to see if this week has been spotted in your county and where else it has been reported in the U.S.

Habitats: It likes moist, shady environments, which is one of the reasons why it thrives in greenhouses, nurseries, and heavily irrigated agricultural fields. Its propensity for shade and moisture also make woodlands a potential habitat to invade.

What is the Impact of Mulberry Weed on the Environment?

So far, the spread of mulberry weed has been contained primarily within the landscaping/nursery industry. However, it has begun naturalizing outside of gardens and has the potential to displace native woodland plant communities. Unlike many other invasives, the problem with this plant isn’t that people are planting it on purpose—it’s that it likes to hitchhike along with ornamentals they purchase. Learning to recognize it and removing it as quickly as possible increases our chances of preventing its takeover of natural communities.

Before considering options for control, proper identification is necessary. As the name suggests, mulberry weed resembles mulberry tree seedlings (Morus spp.). One of the easiest ways to tell them apart is that mulberry weed has hairy-looking stems. North Carolina State Extension has even more identification tips. No matter which way you choose to remove it, be sure to do so before it flowers! Otherwise, its seeds will spread, exponentially increasing the time, energy, and/or money needed for control.

Prevention: Removing seedlings from potted plants before introducing them to a landscape is the best way to prevent it from invading an area. Even so, seeds may be present in the soil along with intentionally introduced plants.  This is one reason why we at Lewis Ginter Botanical Garden clean our boots and tools before we leave an area, and we encourage you to do the same. Disinfecting tools and boots also prevent the spread of plant pathogens. Another tip for preventing the growth of seedlings is mulching garden beds (between 2-3 inches).

Mechanical: In our experience, mulberry weed is easy to remove by hand or with a digging knife when it is small. Bigger plants, however, may require a shovel to dig out the roots. Because most compost piles do not reach temperatures hot enough to kill mulberry weed seeds, we suggest that you do not compost this plant. Instead, bag and dispose of it in the trash. It is also recommended that you do not mow Fatoua villosa, as this may set seeds in the soil.

Chemical: There are few options for chemical control, if necessary as a last resort, including non-selective herbicides like glyphosate for spot treatment. University of Georgia’s weed control specialist offers some additional suggestions (PDF). Remember to use herbicides responsibly by following all labels and to contact your local Virginia Cooperative Extension office for further guidance. 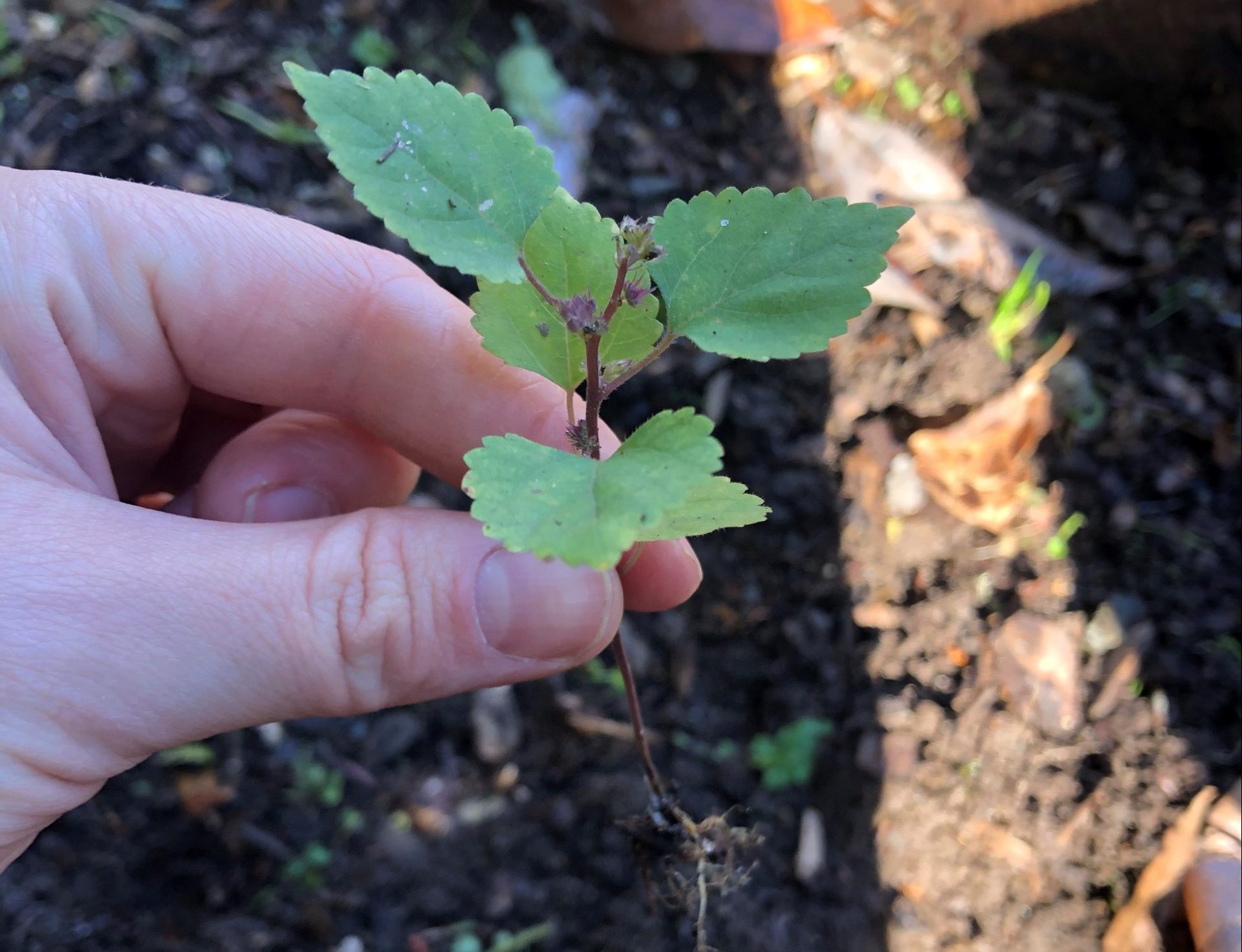 When mulberry weed is small, it is fairly easy to remove by hand. Image by Sarah Coffey.

For more information on mulberry weed, visit and the USDA Plants Database.