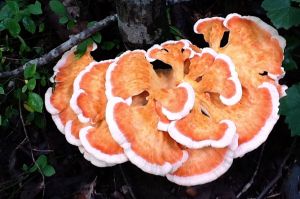 The colorful chicken of the woods mushroom obtains its nutrients from a host log of decomposing wood. photo by Steve Haas

Your favorite recipes probably don’t call for a cup of roasted fungi or a half-cup of sliced decomposers, but that’s precisely what mushrooms are.
Whether you’ve returned from the farmers market with portabella, shiitake, oyster or button varieties, chances are they’re packed with essential nutrients, including protein, minerals and vitamins. In raw form, they’re also fat-free, low-calorie and rich in fiber.
No wonder mushrooms are considered to be a super food.
Mushrooms also are a super crop: fairly simple to establish, inexpensive to grow and easy to harvest. Steve Haas, owner of Steve Haas Mushrooms in Manakin, has cultivated mushrooms for culinary and medicinal uses for about 25 years.
“There are several reasons to introduce beneficial cultures of fungi to your garden,” he said. “Mushrooms turn waste from plants back into nutrients for the plant, while also feeding themselves.”
The decomposers tend to enrich soil and increase crop yields without the need for fertilizer. Growers can ensure their mushrooms are free of chemicals and pesticides. “And don’t forget the freshness factor,” he said.
But never eat or cultivate wild mushrooms unless you’re certain of identification. It is estimated that up to 250 types of wild mushrooms are toxic to humans and sometimes fatal when ingested.
Hands-on education, another benefit of growing mushrooms, has Haas partnering with the Children’s Garden at Lewis Ginter Botanical Garden. “There’s a phobia about mushrooms as the big unknown,” he said. “But children are interested in them, so we can encourage them to look at the amazing colors, shapes and sizes while we teach them mushrooms’ place in nature.”
Haas cautioned, however, that children must be trained — without exception — to never eat a mushroom unless given to them by a knowledgeable parent or educator.
Mushroom grow kits can be purchased online or directly from local growers. Haas nurtures oyster mushroom spores in his own lab and uses the resulting spawn to inoculate decomposing elm logs, which become the fungi’s nutritional host. The logs can be situated in garden beds or woodlands, as long as the environment is somewhat cool, shady and damp.
Haas drills holes in the logs, uses a special implement to carefully insert small quantities of mushroom starter and then protects the openings with plugs of sterile beeswax. If conditions are favorable, the mushroom’s mycelia (mass of branching fibers) should begin to course through the host. Watering or misting is necessary during dry weather.
The time till harvest varies with each species, but fall inoculations might yield mushrooms by spring. To increase the potential for success, Haas recommends introducing only one type of organism to one host so there is a noncompetitive growing environment.
Other mushroom species might prefer different growing mediums, such as straw or composted manure, so be sure to research their needs.

Editor’s Note: This article first published in the Richmond Times-Dispatch on October 14, 2012