The month of October will feature a special exhibit of botanical art featuring illustrations of native wildflowers and plants.  The Plants of the James River Project, a group of botanical artists working to educate the public about the beauty of native plants and threats to them, will present Ancarrow’s List: Native Plants by the River’s Edge at the Lora M. Robins Library in the Kelly Education Center at Lewis Ginter Botanical Garden. This juried exhibit will feature the work of artists from Virginia, Maryland, North Carolina, and Washington, DC. 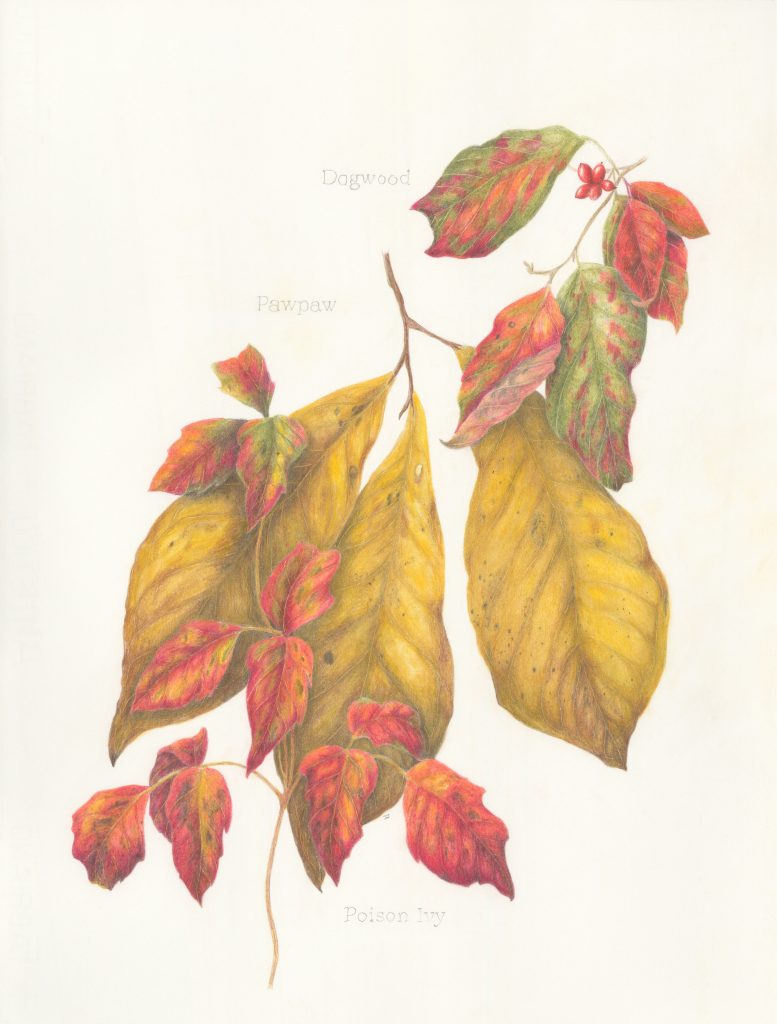 Botanical illustration of dogwood and paw paw leaves in fall by Judy Thomas. You’ll see more works like these in the Plants of the James River exhibition at Lewis Ginter Botanical Garden in October.

The Plants of the James River Project was founded three years ago when my fellow botanical artist, Judy Thomas, and I were traveling to Pittsburgh, PA for the annual American Society of Botanical Artists (ASBA) conference. We had both received our Certificates in Botanical Illustration here at Lewis Ginter Botanical Garden, and Judy and I were looking for ways to continue our education in a meaningful way and to use our newfound knowledge to engage with the wider community. We chose to focus on the importance of native plants and realized that we didn’t have to look further than our own backyard to find inspiration.

In 1992, the family of Newton Ancarrow gave Lewis Ginter Botanical Garden approximately 35,000 slides of native wildflowers that were taken by the local environmentalist, along with documents and a plant list. Approximately 400 slides were digitized in 2016 as the The Ancarrow Wildflower Digital Archive, a collaborative project of the Garden and the Virginia Commonwealth University Libraries and VCU Rice Rivers Center , along with some of his other documentation. A Richmond native, Ancarrow photographed and documented hundreds of plants along the James River during the early 1970s. He is widely credited with motivating the clean-up of the heavily polluted river. His “list” of wildflowers is, to this day, the most complete census of native plants that grow in the James River Park System.

We, inspired by the newly digitized collection of Newton Ancarrow’s slides, as well as the documents and plant list, and our love for botanical art, founded the Plants of the James River Project and were soon joined by Cheryl Exley and Betsy Lyon, also graduates of the garden’s botanical illustration program. We are now a 501(c)(3) organization as a member of the Enrichmond Foundation.

Our first project was a coloring book, suitable for both adults and children, which featured illustrations of common Virginia invasive plants. We hoped it would teach central Virginia residents to identify the many and, unfortunately, popular plants that are not native to our region, but quickly take over natural areas, such as the banks of the James River, and the James River Park System.

The following year we published a second coloring book, which focused on native plants, and we also began to plan for a juried show of botanical art featuring plants from Newton Ancarrow’s list. It’s important to note here that while we were inspired by Ancarrow’s photography,  we actually draw from live specimens. Both coloring books can be found in the library.   Invitations to participate and submit work for consideration were sent to members of ASBA active in mid-Atlantic regional chapters. Lara Call Gastinger, principal illustrator for The Flora of Virginia and Lewis Ginter Botanical Garden instructor was asked to join us to jury the show. Gastinger’s work is in several prominent collections, including the Hunt Institute for Botanical Documentation at Carnegie-Mellon University.

This juried exhibit will be on display at the Lora M. Robins Library from October 1 – October 31, 2019, and then travel to the James Branch Cabell Library at VCU, where it will be exhibited from November 3 – December 22, 2019.  If you want to stay in the loop and support our organization, feel free to follow us on Facebook too.

Sponsors of this exhibit include Lewis Ginter Botanical Garden, the American Society of Botanical Artists, the Pocahontas Chapter of the Virginia Native Plant Society and the Enrichmond Foundation.

Please join us for an artist’s reception and talk on Wednesday, October 9, 2019, at the Kelly Education Center. The public lecture begins at 5  p.m. with a reception after in the library.  The talk and reception are free and open to all.  Judy, Cheryl, Betsy, and I look forward to sharing our art and inspiration from Newton Ancarrow with you. We hope to see you there!

Paula Blair, co-founder and treasurer of the Plants of the James River Project, received her Certificate in Botanical Illustration from Lewis Ginter Botanical Garden. She is a member of the American Society of Botanical Artists and the Botanical Art Society of the National Capital Region, where she serves as co-editor of the newsletter. Her work has been included in several regional exhibitions of botanical art, and she has participated in ASBA exhibits in Miami and San Francisco. She won "Best Artwork in Show" at the Virginia Orchid Society's annual show for her painting, "Dendrobium Orchid."

Garden visitors are welcome to join an artist reception and talk at 5 p.m., Wednesday, October 9, 2019, in the Kelly Education Center. Free and open to all.