Richmond orchid enthusiast Dr. Arthur Burke is one of the the forces behind  Orchids Galore! . An offer of plants from his personal collection helped make the display possible and he also kindly loaned the  Garden his copy of Reichenbachia antique chromolithographs for display during the exhibit. When the topic arose, Garden staff spoke in hushed and awed tones: “Ah yes, the Reichenbachia.” I nodded reverently along with everyone else. The truth was, I wasn’t sure what they were talking about or its significance.

I did a little research. What I discovered were stories of exotic orchids from around the world, royalty and wealthy patrons, family intrigue, and high-stakes financial gambles in fin de siecle England. Sounds like a great Masterpiece Theatre mini-series to me! 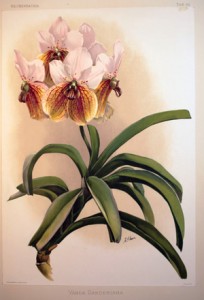 WHAT MAKES REICHENBACHIA SO SPECIAL?
Frederick Sander’s Reichenbachia: Orchids Illustrated and Described was published in London from 1888-1894. It is considered by many to be the greatest illustrated work on orchids ever published.

It is also rare. There are only a few complete sets of Reichenbachia in existence. The collection was published over a period of seven years in two series for a total of 192 plates. A special “Imperial Edition” edition was printed on larger and higher-quality paper; only 100 sets of the Imperial Edition were printed. Dr. Burke’s copy on loan to the Garden consists of an amazing 188 plates (out of 192) from the Imperial Edition.

ABOUT REICHENBACHIA
Reichenbachia was published by Henry Frederick Conrad Sander (1847 – 1920), a German-born orchidologist and nurseryman who settled in St Albans, England. Sander owned a large orchid enterprise and used publications to help sell his orchids – proving our  “modern marketing concepts” were alive and well in the nineteenth century. Reichenbachia was named in honor of Heinrich Gustav Reichenbach, a well-known German orchidologist.

The idea behind Reichenbachia was to depict orchids life-sized with accompanying text in English, French and German. Each of the four volumes comprising Series I and II were dedicated to royalty:  Series I/Vol. 1 to Queen Victoria; Series I/Vol. 2 to Augusta-Victoria, Empress of Germany-Prussia; Series II/Vol. 1 to Maria Feodorovna, Empress of Russia; and Series II/Vol. 2 to Marie Henriette, Empress of Belgium.  Evidence shows that Sander’s strategy was to publish each volume as a dedication to these royal women and wealthy patrons and collectors would not be able to resist also owning the collections held by the royal families!  Thus, the “Imperial Edition” was the grandest of all editions—there were other printings of the same content, but in smaller sizes intended to be mass-marketed to the “rest of us.” 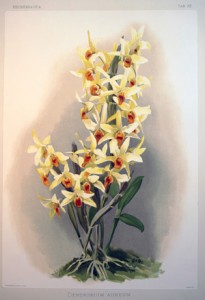 Sander commissioned his future son-in-law, Henry Moon (1857-1905) to do the illustrations. The work that went into the drawings and the printing process was extraordinary. Illustrations were done from live specimens and often took several months to complete. The blocks were hand-made out of wood and the chromolithographs used up to twenty inks. The cost was so great that Sander later said the project almost ruined him.

YOUR CHANCE TO SEE THESE RARE PRINTS
If you visit Lewis Ginter Botanical Garden anytime between now and April 24 (Easter Weekend) – I invite you to wander over to the Education Building and take a look at images from the Reichenbachia hanging in Ginter Gallery II (the gallery space in that building.) The Garden is displaying four of the very best images. Thank you, Dr. Burke, for sharing them with us and making our “orchid experience” complete!