Pick a Peck of Pumpkins

Carve it. Craft it. Cook it. Pumpkin is so versatile, it deserves the season’s spotlight. 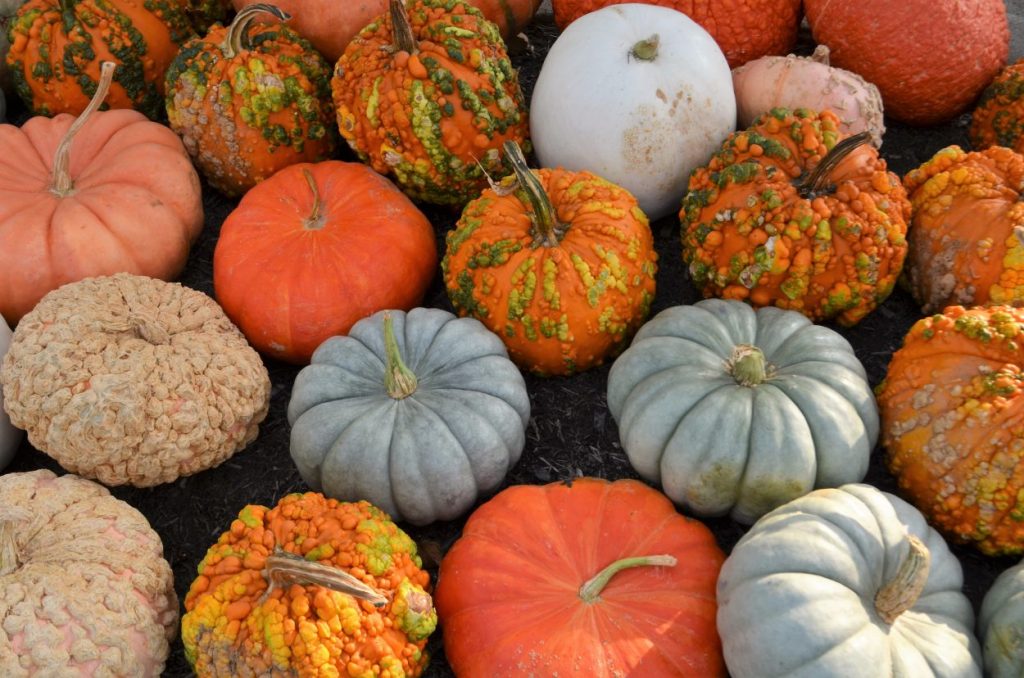 Not only are pumpkins inexpensive, readily available and striking as autumnal decor, some varieties are as nutritious as they are delicious. The flesh and seeds of edible pumpkins are packed with fiber, as well as vitamins A and C. With the right recipes, the smaller leaves and blossoms—especially the male flowers—are delectable, too.

Pumpkin is a member of the squash and gourd family, so it’s botanically referenced as Cucurbita maxima. Countless varieties have flooded the marketplace in recent years. Fortunately, the common name often provides clues about each variety’s anticipated size, color and intended use. For example, Jack-Be-Little, Munchkin and Baby Bear are miniatures, while a mature Atlantic Giant can weigh a hefty 2,000 pounds. New Zealand Blue is just that: an eye-pleasing, blue beauty. Sugar Treat, Pink Banana and Amish Pie are ideal for cooking. The Super Moon is as large as it is white, and Cinderella’s Carriage looks just like one (imagination required).

Now is the time to ask gardeners and farmers to share planting tips, as well as seeds from harvested pumpkins. Though some hybrid seeds may not be viable, seeds from select varieties can last years when properly dried and stored.

Pumpkins do not like cold, so postpone planting until next year. Soil temperature should be at least 70 degrees, which typically is mid-June and later in our Zone 7.

You’ll need a site that enjoys good drainage and preferably full sun. The more space the better, since the veggie’s vines tend to sprawl – up to 25 feet with some varieties. Consider a soil test before planting, since neutral pH is best. Enrich the soil with manure mix or rich compost, and be careful not to compact the soil during the process.

When it’s time to plant, prepare hills of soil spaced 3 to 4 feet apart, and plant about five seeds per mound. Another option is to prepare rows 4 to 6 ft. apart and place seeds every 6 to 12 inches With both sowing practices, seeds should be no more than 1 to 1.5 inches deep in the soil. Germination typically occurs in seven to 10 days, but be patient. Pumpkins require a long growing season, typically 75 to 100 frost-free days.

Next, the maintenance begins. Pumpkins aren’t too fussy, but they are big eaters and drinkers. You’ll need to regularly fertilize and water them. Try not to overwater the plants and avoid saturating the foliage and resulting fruit, which is the pumpkin itself. Damp conditions over time can support rot, and pumpkins can suffer from bacterial and fungal diseases, such as powdery mildew.

Like squash and other vegetables, pests can take a toll, too. Watch for harmful insects and treat them as soon as they appear. Typical problem-makers are the aphid, squash bug, squash vine borer and more. But remember: be prudent with insecticides or use organic practices since bees are important for pollination.

Sometimes thinning of plants is necessary. Also, once select vines sprout and spread, get your snips ready. Establishing a main vine, pruning select runners and pinching off the ends of pumpkin-producing vines will help each plant focus energy on its fruit. The vines are somewhat delicate, so take care not to break or step on them during the process.

The pumpkin plant develops flowers about nine or 10 weeks after planting. Some flowers are male, others are female and both are necessary for natural pollination. Once the fruit develops, allow it to mature on the vine. Size is not necessarily a sign that the pumpkin is ripe, since genetics determines that. Instead, watch for darkening fruit, tattered leaves and reduced flowering. Before picking, give the pumpkin a gentle thump to test whether it sounds hollow, which is another sign of ripeness.

If using the pumpkin for decoration, increase its longevity and visual appeal by leaving on 3 or 4 inches of stalk when severing it from the vine. The fruit can be easily bruised, so during transport, gentleness goes a long way.

Fortunately, the vines should continue producing pumpkins until frost, extending the fruits of your labor.

Richard Lloyd, co-owner of Lloyd Family Farms and a 6,000-acre farmer, reminds gardeners to practice crop rotation. This helps prevent vulnerabilities and diseases from transferring to the next year’s crop.

If you lack outdoor space, sow pumpkin seeds at the edge of your garden. Over time, you can guide the growing vines into your yard, along the sidewalk or wherever convenient.

Large buckets and patio containers can be used to grow the smaller varieties of pumpkin.

If an even shape is important, occasionally rotate the pumpkin to prevent a flattened bottom or side.

If rain over saturates the ground for an extended time, insert a thin board or supportive mesh under the ripening pumpkin to help prevent rot.

Pumpkin seeds discovered in Central America dated back to 7,000 B.C.

Pumpkin also was a New World staple enjoyed by Native Americans. They roasted and boiled the fleshy pulp. Dried strips were used to weave mats, and dried hulls were used as bowls. Realizing its value, the Native Americans eventually raised pumpkin as a cultivated crop.

Colonists liked the taste and shared it with their European counterparts. They also made a primitive pie by cutting off the pumpkin top, removing the seeds and pouring in milk, spices and honey. The top was placed back on, and the whole concoction was baked underneath hot ashes of an open fire.

Our colonial ancestors also brewed some of the first pumpkin beer. The pulp acted as a fermenting sugar to which persimmons, corn and spruce tips were added.

This article first published in The Richmond Times Dispatch in October, 2017.

“Instead of pottage and puddings and custards and pies, Our pumpkins and parsnips are common supplies; We have pumpkin at morning and pumpkin at noon; If it was not for pumpkins we should be undone.” --c. 1643