In a crime with no witnesses, investigators rely on forensics and DNA to figure out what happened. Turns out, pollinator science is not much different. For Randolph-Macon College Professors Drs. Nicholas Ruppel and Stephanie Coster and their students, the mystery is what pollinators are present and what factors influence their populations. To solve this mystery, the team is using forensic DNA analysis combined with field observation. Basically, they are looking at the evidence pollinators leave behind to see who visited some of our most pollinator popular native flowers — Liatris spicata (blazing star) and Pycnanthemum muticum (mountain mint). 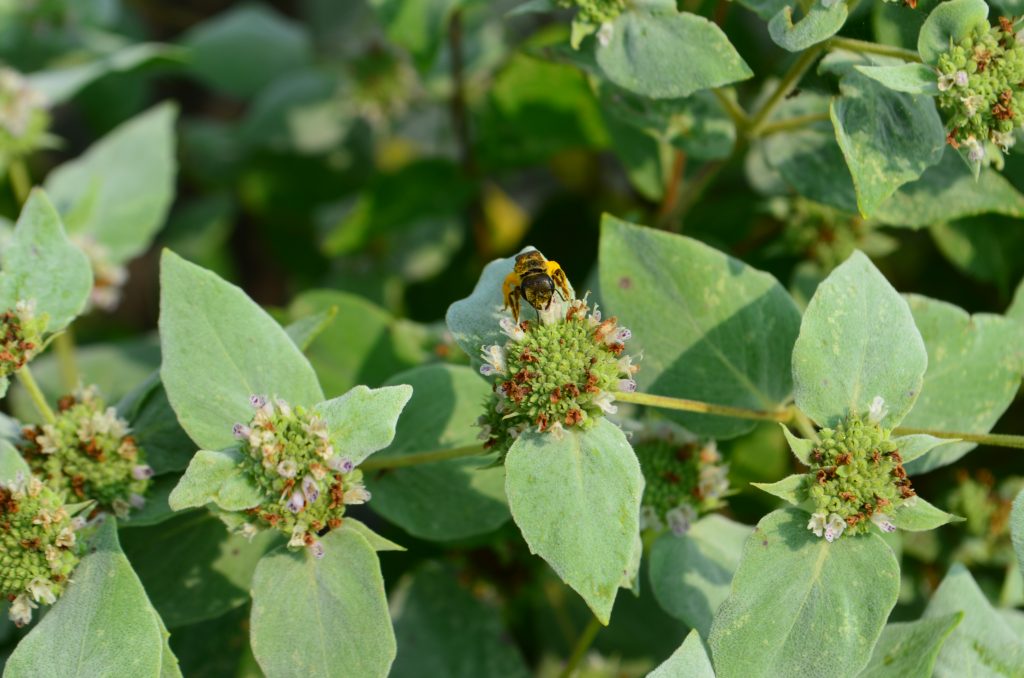 What are we talking about? Yes, pollinator poop!

How do you collect pollinator DNA? Well, you take a swab on a stick and run it along a bloom collecting any bits of excrement, saliva, or shed material from pollinators who have visited there.  Three research assistants, Randolph-Macon students Teresa Weir, Mackenzie Dingus and Allison Ortiz are aiding the work. Ruppel makes observations by taking inventory of the other blooming plants nearby and identifying the pollinators he sees. Weir swabs the blooms and places what’s collected in a storage solution. Ortiz and Dingus collaborate on the visual observations by identifying pollinators that land on the previously marked flowers, while also noting environmental conditions like light availability. Next, Ruppel will send the samples to the lab of his R-MC colleague and collaborator, Dr. Stephanie Coster, to process the DNA material “we just need a tiny bit of DNA, and then in the lab, we copy it–like a photocopier, and then sort out the sequences to see what species interacted with the flower,” says Coster. It takes a while to extract the genetic material and ship them out for analysis, so the inventory and analysis should be complete by next spring. Finally, next summer Dr. Marcella Kelly, who is a population modeler at Virginia Tech, will work with her graduate students to take the lists of pollinators from the visual log and from the DNA forensics, and “they will take all of that information and write a story about what promotes occupancy and what hinders it.” says Ruppel. 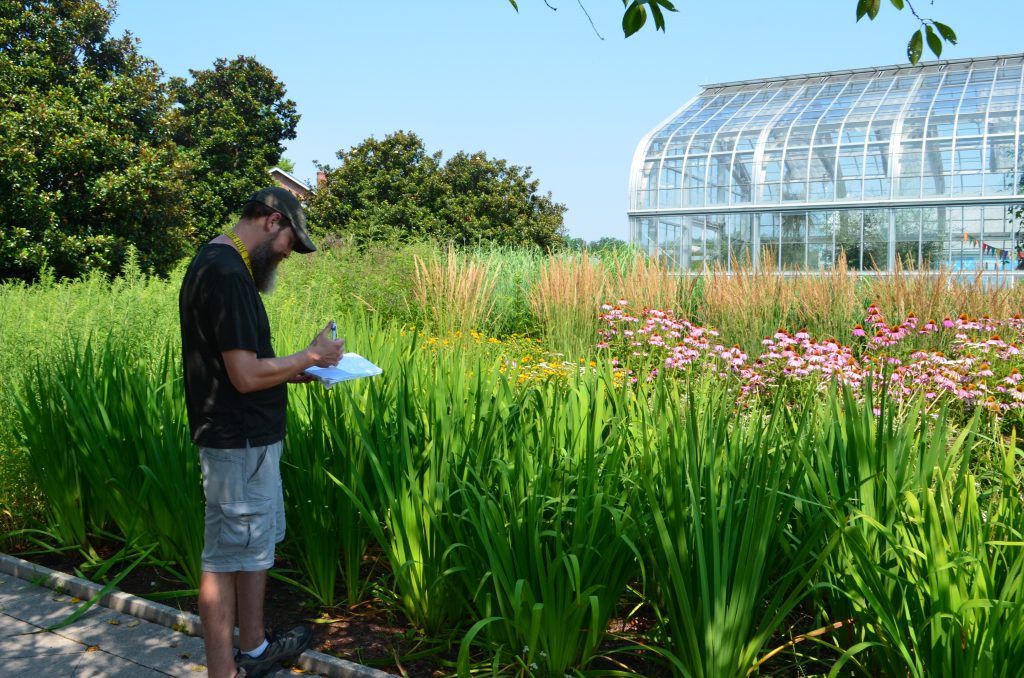 Dr. Nick Ruppel in front of the Lewis Ginter Botanical Garden Conservatory, recording a list of nearby flowering plants (plants other than Liatris spicata that are in bloom nearby).

The goal of the study, “Surveying Pollinator Assemblies and Modeling Occupancy at Native Plant Gardens, a Comparative Approach,” is, of course, to learn more about pollinators to figure out what they are attracted to and thereby increase their numbers. Ruppel and his team visited and collecting data at dozens of sites in Central Virginia this summer, many of them urban or suburban.  (You can read the full abstract at the bottom of this post.) 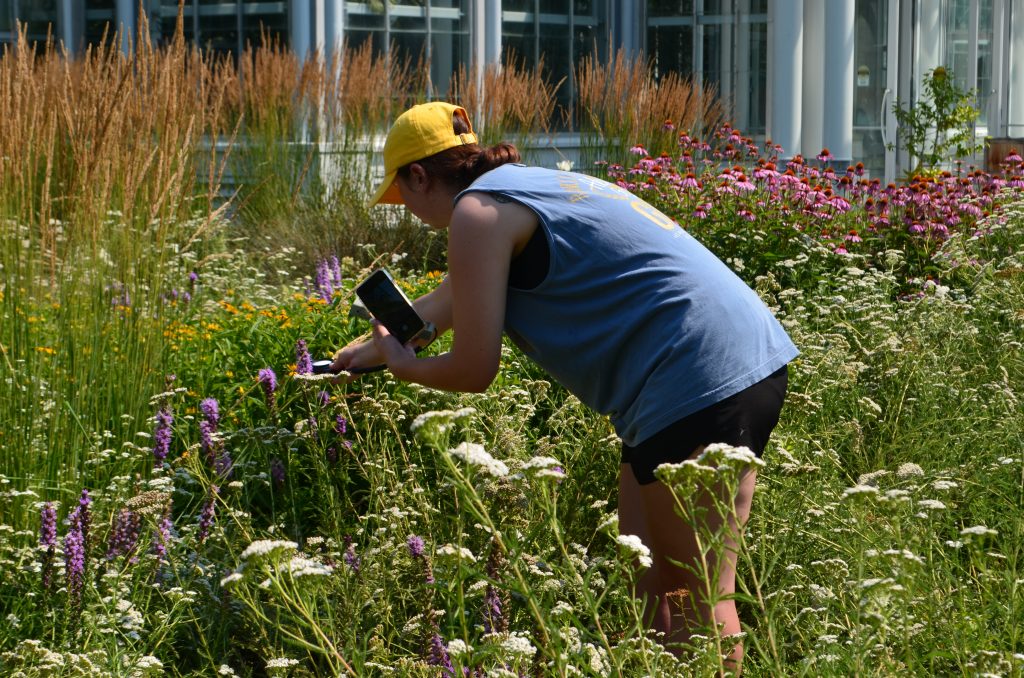 Allison Ortiz recording the light availability near a Liatris spicata flower in front of the Conservatory at Lewis Ginter Botanical Garden.

“The current literature says many individual factors are important to creating a healthy urban ecosystem.  For example, Doug Tallamy’s work has highlighted the benefits of growing predominantly native plants,” Ruppel says. But also, maybe the story is more complex than that.  “Maybe there is this one particular pollinator that can only be found with a nearby water source, high light availability, and a specific collection of flowering plants in order to occupy a garden space. Maybe we’ll learn something like that.” 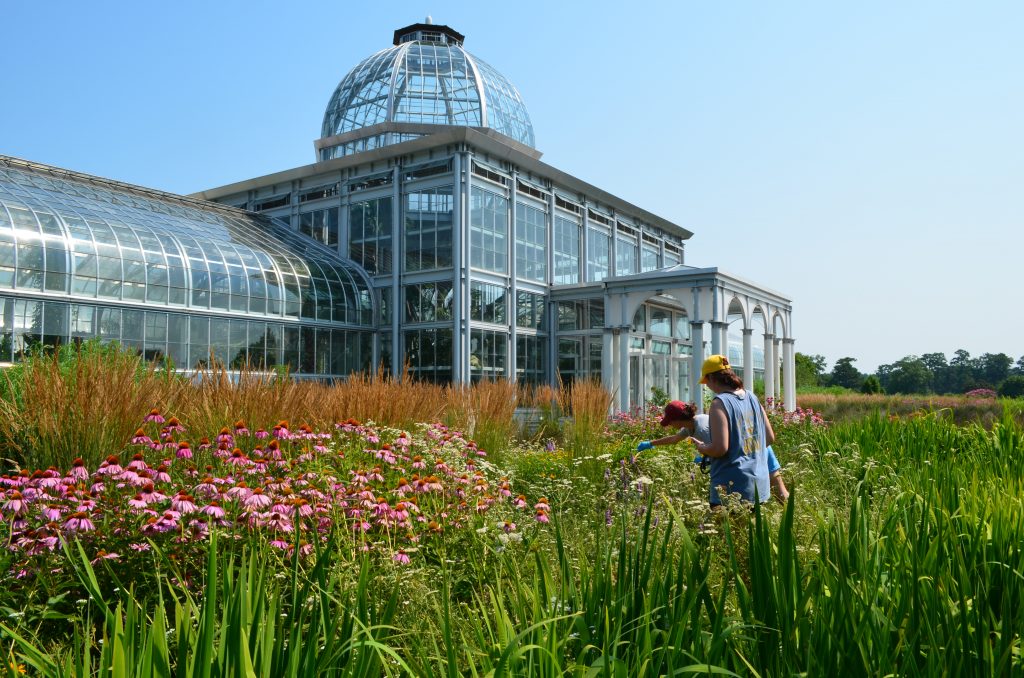 The level of detail planned into the study was impressive. Ruppel explained  “the visual monitoring methods often used are biased towards day-active pollinators; they miss many nocturnal species (e.g. moths).  The environmental DNA analysis can’t tell us the number (i.e. the abundance) of a particular pollinator that visited the flower, just that a member of that species was there.  So, each monitoring technique has its pros and cons, but we’re hoping to minimize the cons by using both methods.” 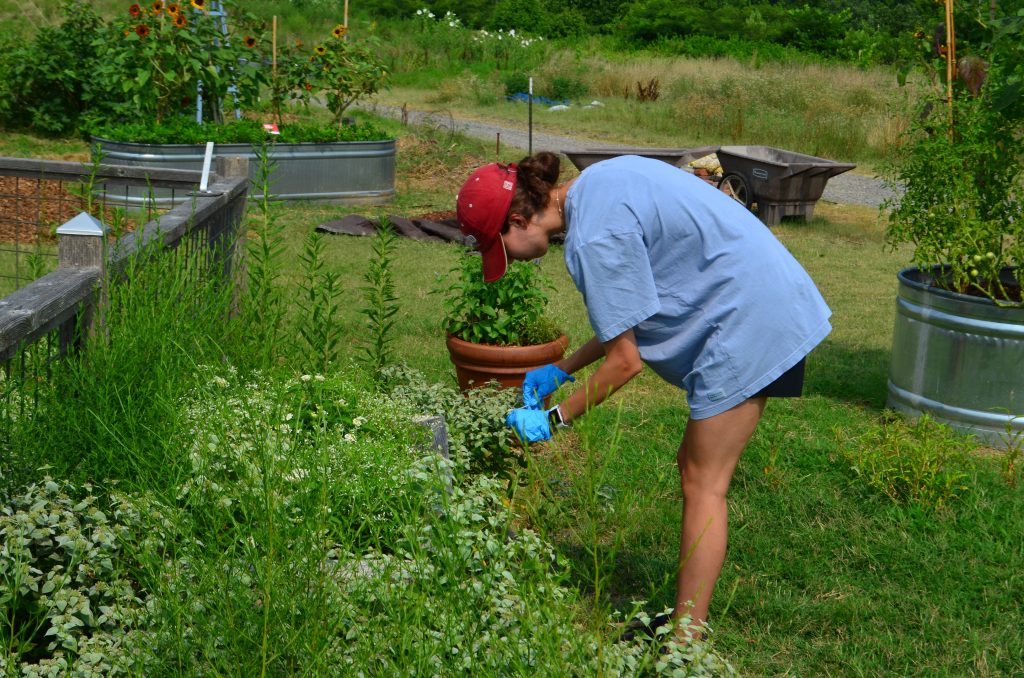 Since the study will take more than a year to complete, what have they learned so far?

Allison Ortiz, a Research Assistant and junior, majoring in biology says one of the things she’s learned is that urban gardens are really important to helping pollinators thrive. Research Assistant Mackenzie Dingus, also a junior, majoring in biology and applied math offers a perspective that she’s developed through this research.  “If you take humans out of the world, the world would thrive, but if you take one type of bee out, the ecosystem can fall apart.” 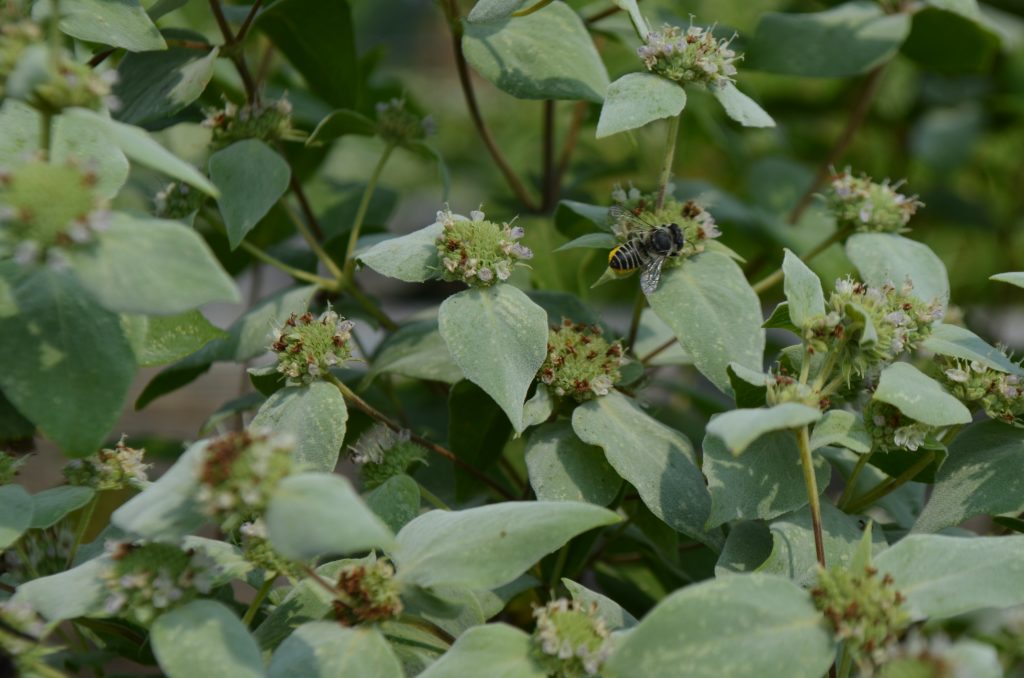 Coster says, “it is exciting to be sampling environmental DNA from pollinators. Typically this type of research has been used in aquatic systems to learn more about species in those environments. It’s a new frontier here on land!”

Ruppel says one of the things he’s learned from this study is you really truly never know what you are going to find and it’s important to keep an open mind. He may have had a hypothesis that looking at our patch of mountain mint located in the apiary at Lewis Ginter Botanical Garden, and mere feet from the hives, that the mountain mint would be filled with the nearby honey bees. But, that turned out not to be the case.

“You go to a site and you have expectations of what you are going to see. The first couple of sites had honey bees everywhere, but then you come to a place like this [Lewis Ginter Botanical Garden] and there are so many fewer honey bees comparatively when we are right here at the hive [in the apiary]. Expect the unexpected!”

Another thing he learned is how interconnected the gardening world in Central Virginia is. Ruppel says he learned that nearly all of the gardens he visited had purchased plants from native plant advocate and sustainable landscape designer Beth Farmer.  Starting out, Ruppel had trouble recruiting gardens for his study.  Then he spoke at the Pocahontas Chapter of the Virginia Native Plant Society’s quarterly meeting and had plenty of volunteers as soon as they realized the importance and value of the study. “We ended up with more gardens than we needed,” he says. “Meeting all these people has been a joy — everyone’s been so welcoming. The gardening community in Richmond has been so welcoming to us.”

Research Assistant and Teresa Weir, a senior majoring in Chemistry, agrees. “My favorite part was meeting all the gardeners that let us come to their houses because they are all really passionate about native plant gardening and that makes me more passionate about what I’m doing.” She says she hopes that this project and their research will make people more aware of pollinators.

As humans, our food production relies heavily on the invisible efforts of insect pollinators. The past several decades have seen dramatic declines in the number of pollinators due to various factors including habitat loss, pesticides and disease. One scientific-supported strategy to reverse declines is to create and maintain urban and suburban gardens that attract pollinators and act as habitat reserves. To make the biggest impact, however, clear recommendations are needed for what plants maximize pollinator biodiversity and what factors influence pollinator visits. Our proposed study will use two methods to determine what pollinators interact with urban and suburban plants: traditional visual observations and a newer technique of “pollinator forensics,” in which DNA left behind on flowers is isolated and used to identify the pollinator visitor. Our goal is to compare these methods to devise planting recommendations that maximize pollinator biodiversity.

The interdisciplinary project is funded by the Jeffress Trust and Randolph-Macon College. 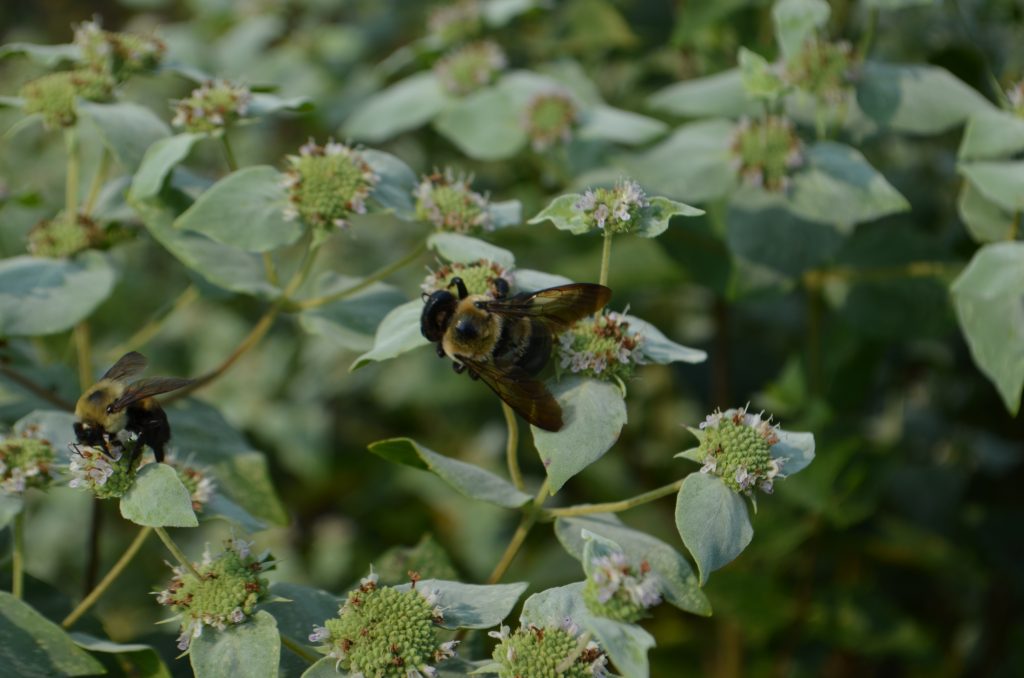 A common Eastern bumblebee (Bombus impatiens) on the left, and a carpenter bee on the right, share a snack of mountain mint (Pycnanthemum muticum) nectar.