Ruler of the Ginkgo 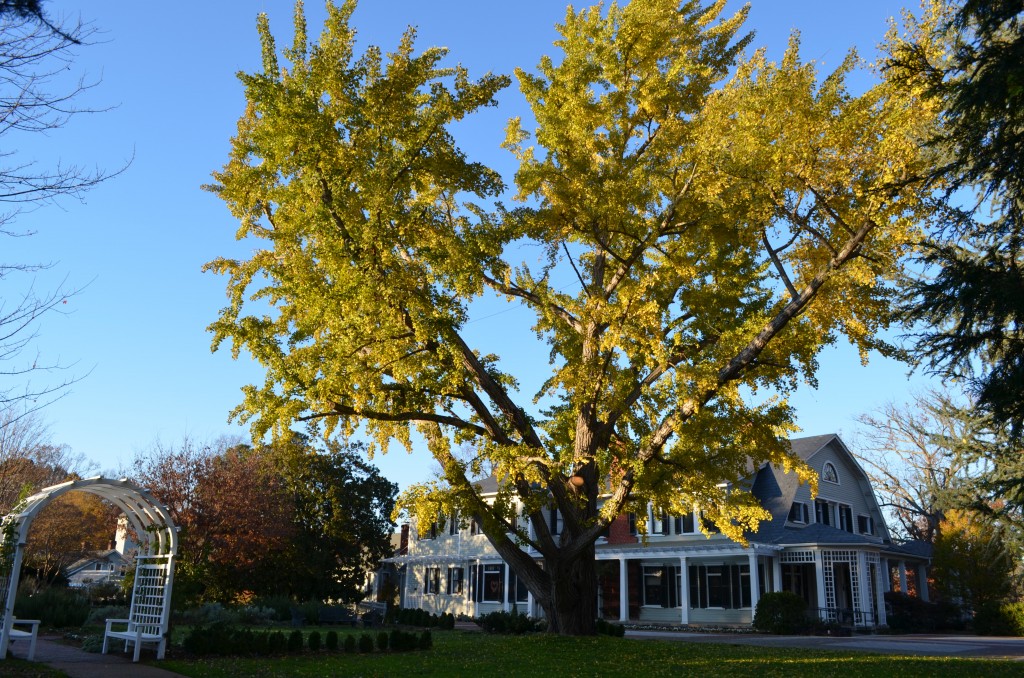 Ginkgo biloba in front of the Bloemendaal Hosue.

In front of Bloemendaal House, a botanical oddity grows on the grounds of Lewis Ginter Botanical Garden. Our Ginkgo biloba happens to be the one female, besides Grace Arents, that seems to get all the attention at our Garden. This specimen was believed to have been planted by our founder herself. The Ginkgo biloba species has lived unchanged for 250 million years. This tree has survived the Jurassic era and is one of the most ancient. Ginkgos are dioecious, meaning that they are separate male and female plants. Both are prized for their fan-shaped foliage, golden fall color, and beautiful form. Male trees produce pollen cones with motile sperm and female trees produce ovules. For most landscaping projects, the male ginkgo is greatly preferred over the female due to the odor of the female’s rotting fruit. Although the skin of the fruit can irritate human skin like a poison ivy reaction, some use parts of the ginkgo for medicinal purposes. The nut of the ginkgo is a delicacy in many cultures. (Note: Eating too many ginkgo nuts can cause poisoning, so you’d want to check with a medical professional before ingesting any.) 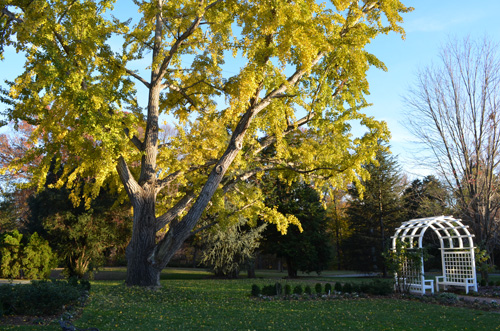 The magnificent golden foliage before the leaves fall.

Elizabeth Fogel, Senior Horticulturist, with help from others, is the brave soul who picks up the fruit that falls from our female Ginkgo biloba. In the fall, three to four times a week, Fogel devotes many hours to picking up fruit from the ground. This job can be tricky because the fruit contains butyric acid, which makes it smell bad. You can see why cleaning the fruit up is a priority for weddings and special events.

Fans of the tree come from all over to see the magnificent golden leaves that have a reputation for falling all at once. During our conversation, I asked Fogel how she felt about the tree. She mentioned if she had to post a relationship status between her and the ginkgo tree, Fogel would say: “It’s complicated. The ginkgo has so many wonderful qualities like the beautiful fall colors, its shape and form, and the uniquely shaped leaves, but then it does this horrible fruit set.” 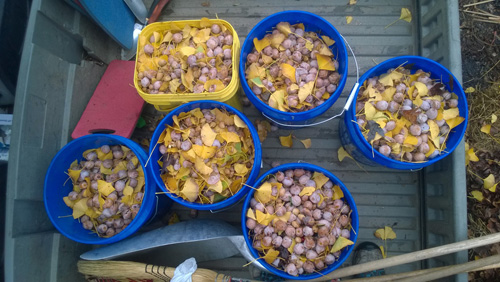 Ginkgo fruit collected in buckets by staff and volunteers.

It’s a lot of work to keep up with the amount of fruit that falls from the tree. Despite the Garden’s effort to minimize the tree’s ability to produce fruit by a spraying growth regulator in the spring, 360 gallons of ripe and unripe fruit is collected each year by Fogel, staff, and volunteers. It takes commitment and tenacity to complete such a tedious job. Keeping the grounds clear of smelly fruit every week can be overwhelming and Fogel’s hard-work doesn’t go unnoticed. After a particularly “fruitful” day she goes back to her desk and reads a message from her friend and Children’s Garden educator, Dawn Lipscomb: “Ruler of the Ginkgo, and she will not be defeated!”

Can’t get enough of our ginkgo? The ginkgo tree will be up-lit and incorporated into this year’s Dominion GardenFest of Lights. You can also read facts about the tree in the Lora Robins Library. If you’re in search of a unique gift this holiday season, Ginkgo leaves from our trees are encased in cooper and can be purchased at the Garden Shop. 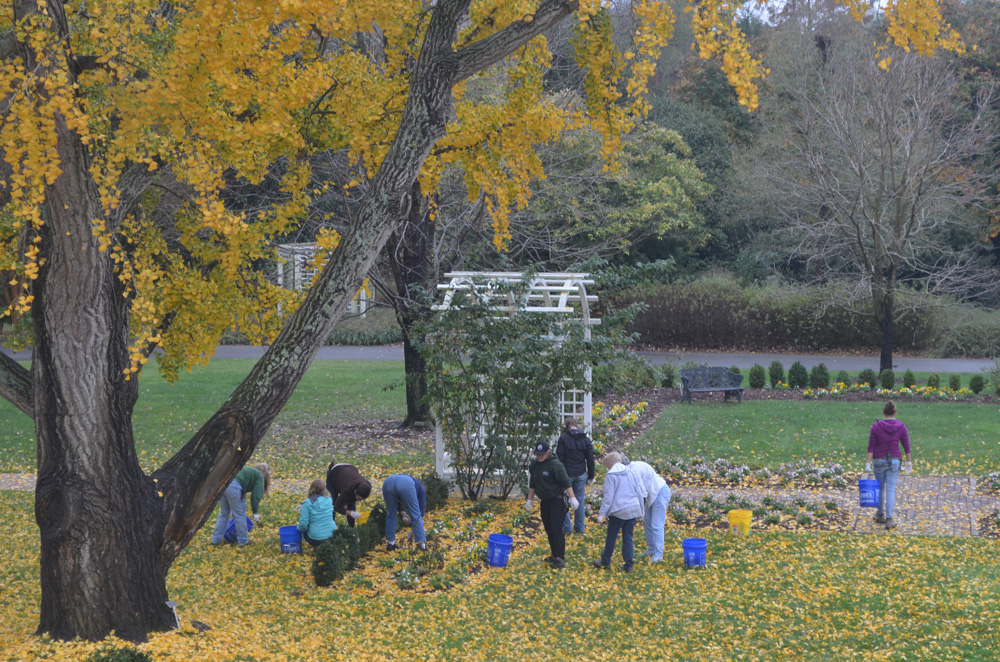 Staff and volunteers help pick up fruit from the Ginkgo biloba.

As of today, there are still beautiful fall leaves on some of our ginkgo trees in the Asian Valley. The leaves on this remarkable tree have mostly fallen now, but if you visit it, look for a special ephemeral message written on the ground in golden yellow leaves.

Tonisha Albritton is a PR & Marketing intern at Lewis Ginter Botanical Garden. She loves to interact and meet with new people. When she's not in school or working, her favorite thing to do is spend time with her family.