Sabot at Stony Point School: The Birds' Nests & the Meadowmorphosis 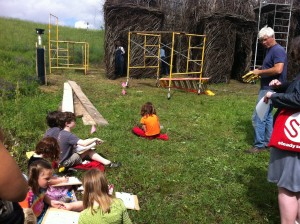 Note: Over the next few weeks, we will bring you updates on the progress of the Patrick Dougherty stick sculpture installation at Lewis Ginter Botanical Garden. We are calling this 3 week transformation of the Anderson Meadow  a “Meadowmorphosis.” We will celebrate the completion of the fantasy-like structure with a naming ceremony at Spring Fling on May 22nd. When the work is complete, you will be able to walk through it and peek out openings. The sculpture will be part of the Garden’s landscape as long as Nature allows, so look forward to enjoying it with seasonal changes (and even lighted at GardenFest!)  To get an idea of the type of structure he is building, take a look at some photos of Patrick Dougherty’s other work. 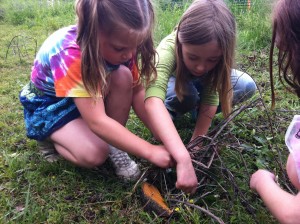 This morning I wandered down to the Anderson Meadow to see what progress had been made on the Meadowmorphosis stick sculpture.  I was excited to see two entire classes of kids and their teachers — lingering around the sculpture and examining the massive installation that we’ve been creating over the past   2  1/2 weeks.   One school group was headed out as I approached, but the other,  I could see as I got closer, was actually sitting on the ground with clip boards and paper, sketching their own versions of the Meadowmorphois on paper.  As I got even closer, I realized that these were my son’s former classmates from Sabot preschool — now Sabot at Stony Point School.  Several of the children and parents recognized me and quickly I discovered from the parents and teachers that the 6-year-olds have been creating birds’ nests back at their school.  As soon as they found out about Patrick Dougherty’s project they knew they had to schedule a visit to the Garden. 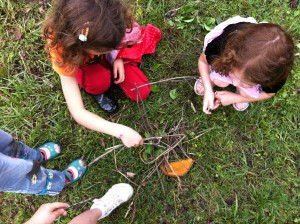 Sabot School kids rich in the process of creating. 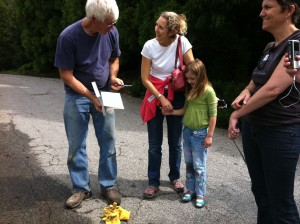 Up until now, the teacher explained, they’ve been using a variety of media to build small-scale birds’ nests in their classroom.  Now, she says, they are ready to build a large scale bird’s nest outdoors, and hope to use sticks.  They came to visit the site of the Meadowmorphosis and to talk to Patrick Dougherty for both inspiration and advice.  Patrick seemed intrigued by the idea and although he’s under a tight deadline to finish up the sculpture by Sunday, he came over to chat with the students.  Patrick is often fond of saying that kids know everything there is to know about sticks.   When he talks about deciding to become a stick sculptor, often he speaks of going back to his childhood roots.  In this case, the children were specifically interested in making a nest for all the classmates to fit in together, and were wondering about how to do it.

“You get inside and move your body around,” he said. “Like a bird does.”  Then, he sort of wiggled his body the way a bird does when forming a nest to make the contours fit the contours of her body.

Last year, when Patrick was here visiting sites to collect sticks for the harvest of the sculpture, I spent the day with him, learning about what he looks for  and how much material is needed. The children’s teacher asked me to explain to the kids exactly how much material is needed for a sculpture of this size.  I told the children we used 5 truckloads of material, and there are some more  important things they should know. It takes time  to strip all of leaves off,  and  we also have to keep the sticks out of the sun and rain,  so they don’t dry out and get brittle or soggy before we can use them. I explained that we only have 3 weeks from when they are harvested until when they become too brittle to use.  And I explained that today would be our third trip out to harvest MORE sticks from the forest — because we keep running out. And I explained how we work with the Virginia Department of Forestry to selectively harvest certain types of saplings, in a way that helps the trees that remain have more light and water.   The sculpture consumes sticks, at a rate we can hardly keep up with.

Part of Sabot at Stony Point’s philosophy is that the teachers there try to facilitate (or remove obstacles) so that the children can create their vision. These are some really inspired kids, so I can’t wait to see what comes of this project in the coming weeks at Sabot School.

Soon after I left them, clip boards were tossed to the ground, and children started looking for scraps of sticks in the meadow.  In just a few minutes they were creating their own miniature stick sculptures alongside Patrick’s giant one.  I couldn’t resist filming a quick video of them working — listen carefully to the audio. Their joy in creation and in working together is inspiring to me.  Who will it be for? A fairy?  A small person?  A bird?

Transitions are always hard. But especially more so when you are completely consumed by what you are creating — and in the moment of flow. There’s a certain kind of joy that comes from an experience like that that cannot be replaced with anything else. And several of the girls were in the zone. They simply did not want to stop working on their creation.   Their teacher reminded them that there was more creating to do once they got back to school, and so after several promptings, they left their miniature sculptures in the meadow and ran to catch up with their classmates who had already moved on. 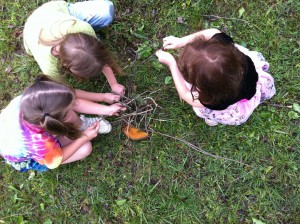 As for the birds, we noticed some mockingbirds landing in the sculpture and flitting about and staking out their territory in the sculpture already.  I have a feeling that whatever these kids create — it will be well loved — by both birds and humans, just as this one will.