Southern Blight in the Garden 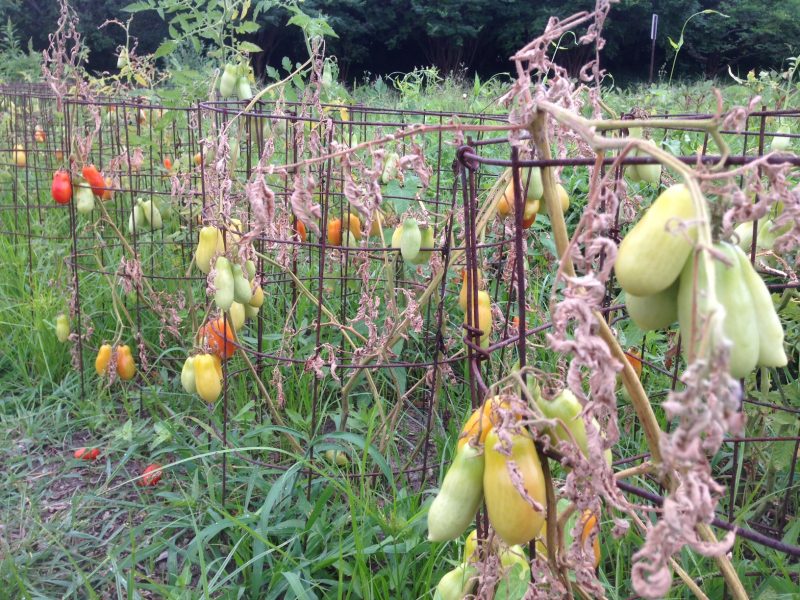 These infected tomatoes are a total loss. They will be removed in a few days so we can begin solarizing the soil.

Sadly, we recently discovered southern blight on some of the tomatoes and peppers in our Community Kitchen Garden.  Since our mission is education, we wanted to take this opportunity to talk about the causes and symptoms of southern blight and what can be done about it.  Also, it’s a chance to show that everyone — even botanical gardens — struggles from time-to-time with sick plants.  Southern blight is sometimes referred to as southern wilt or southern stem rot because the plants look wilted and start to rot.  It’s likely the disease was accidentally brought to the  Community Kitchen Garden sometime last growing season and overwintered in the soil.  Southern blight is caused by several soil-borne fungi and can be easily transferred by tools, clothing, or shoes. There are over 500 different host plants including vegetables, fruits and ornamental crops. It can live in the soil for several years — even without a host plant. We will probably never know where it came from.

The blight begins as a lesion at the base of the plant near the soil, eventually girdling the entire stem. This will cause the leaves to yellow and the plant to wilt. Soon after, the whole plant will die.  If you look closely at the base of the stem of an infected plant and examine the surrounding soil you will notice a white thread-like fungus, this is the mycelia.  As the disease progresses, tiny round seed-like sclerotia form.  These tiny tan to brown balls are the symptom to look for if you suspect you have southern blight. 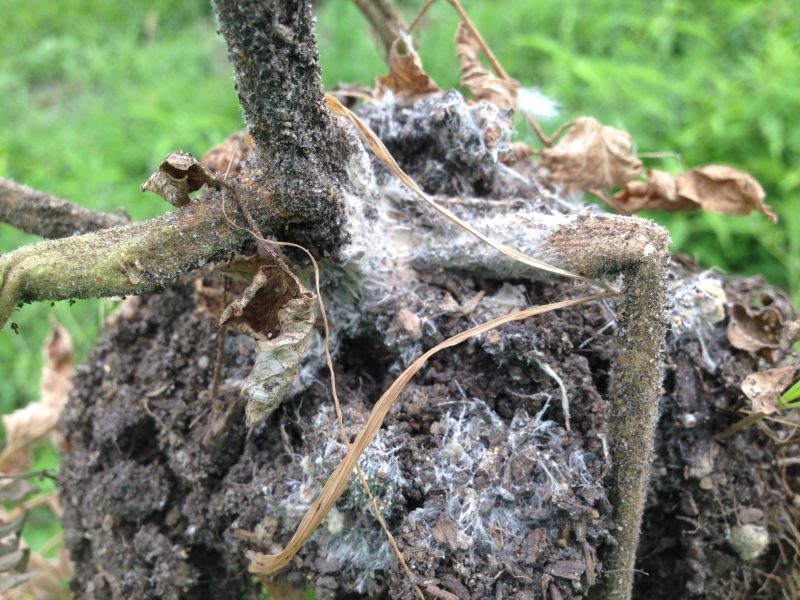 This tomato plant is infected with southern blight. You can see the thread-like mycelia, and if you look closely you can also see a few tiny sclerotia.

When a plant is infected with southern blight, there is no saving it. And because this disease can infect so many other crops, it’s very important to remove the infected plants as soon as possible. All diseased plants should be placed in trash bags and thrown away, not put in your compost pile.  In addition, you’ll want to burn or sanitize all plant supports such as tomato stakes and cages.  If sanitizing, use a bleach solution — one part bleach to nine parts water.

There are different ways to treat southern blight in the soil.  The soil can be treated with chemicals, inverted (you can try to bury the infected soil, because the blight can only live in the top five inches), or solarized. In the Community Kitchen Garden, we’ve chosen to treat the soil through solarization — heating it up for an extended amount of time.  This will involve placing a large piece of clear or white plastic over the infected area and leaving it for several weeks; this will only work during the hottest times of the year, so the timing is good for us.  Also, when working in previously infected areas, it’s a good idea to take extra precautions to make sure the soil doesn’t become reinfected or spread. Sanitize your shoes and tools with Lysol or rubbing alcohol (at least 50 percent strength) to keep the disease from spreading.

Southern blight is not what you want to find in your garden, but if you do, it’s important to take the proper steps to stop the disease and prevent it from spreading. Don’t let your guard down on this one.

Growing food for those in need.

Find out how you can help
Good Bug, Bad Bug

Not all insects in your garden are the same. Learn which are good!