Continuing from last week, here is the conclusion of Grace Arent’s biography of her Uncle Lewis Ginter published in the Appleton’s Cyclopedia of American Biography. She wrote this in 1919. The story picks up after the Panic of 1873, when Lewis Ginter’s banking enterprise failed and he became a traveling salesman selling tobacco to repay the debts incurred by his banking failure. Miss Grace’s words continue: 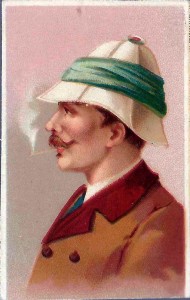 “English naval officer”, one of Allen & Ginter’s cigarette cards from the 1880s

His attachment to Richmond turned his thoughts continually back to his old home, where he had been so prosperous and contented. The result of a visit to his friend Jno. F. Allen was a partnership of the two men, under the name of Jno. F. Allen & Co. in the tobacco business and from this time forward he was eminently successful. All of the advertising for the firm was done Major Ginter, and many of his conceptions in this line were works of art. He was the first in the South to employ women in the manufacture of cigarettes. Shortly after, the sale of the products [an expansive line of cigarettes including Richmond Straight-Cuts No.1, Napoleon, Dandies, Virginia Brights, Little Beauties] of the firm was extended to foreign countries, beginning in London; later, permission was obtained from the French government for the sale in Paris of their cigarettes to the exclusion of other American brands. Agencies were subsequently established through Major Ginter’s enterprise, in Hamburg and Brussels, as well as in British India, South Africa, and Australia. In 1884 the firm name was changed to Allen and Ginter, Mr. Allen selling out his interest and retiring from the business. In 1890 the American Tobacco Company was founded, Allen and Ginter being one of the five great manufacturing concerns which composed it. Upon the organization of this great establishment, Major Ginter was elected president; he declined the office but became one of the directors and held this position till shortly before his death. [1897]. Major Ginter took a great personal interest in all of his employees, doing everything possible for their comfort and happiness. A well selected library was maintained for their use, he provided a physician and medicines without cost, and when one of his buildings was destroyed by fire those who were thrown out of work received their regular wages during the period of rebuilding. Much sincere regret was expressed when he ceased to be the active head of Allen and Ginter’s.

It was at this time, about ten years before his death, that he became more closely associated with various business enterprises in Richmond and elsewhere. He owned the Richmond Times for a short period. He built the Jefferson Hotel in Richmond. He had a large interest in the Richmond Locomotive Works. He acquired a large acreage in the section north of the City near his own country home [Westbrook], and became much interested in suburban development, plotting the land off in sections, planting trees, hedges, setting out some twenty-five miles of the latter. A part of this region is now the most beautiful suburb of Richmond and is known as Ginter Park. [Developed after his death]. In this section he gave the land upon which were erected the buildings of the Presbyterian Union Theological Seminary. He planned and developed Lakeside Park which included a botanical and zoological garden. This has since become a private property [now called Jefferson-Lakeside Country Club]. He had great faith in good roads and at his own expense rebuilt the Brook Road, the leading thoroughfare north of Richmond. His whole heart seemed to be set upon so administering his fortune as to do the greatest good to the people of Richmond and its vicinity. That patriotism in peace which avoids every touch of the politician and which for want of a better expression we call “public spirit” was with Major Ginter almost a passion. 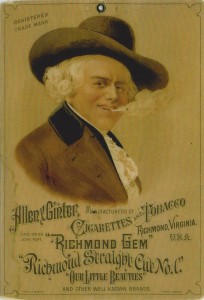 He had many and very loyal friendships some dating from the days of his youth, but he never married. When his sister-mother [this is what Grace Arents called her mother, who was Ginter’s sister and cared for him after their mother’s death] was left a widow he made his home hers, and always treated her children as if they were his own. He died at his country home, “Westbrook”, after many months of illness, and his death was regarded as a personal grief by the whole community. [1897, due to complications of diabetes] His benevolence in his life time was far reaching, and when his will was opened it was found that in death he still remembered. Almost every charitable institution in the City was mentioned besides many pensions and long lists of legatees. His was a remarkable life …[after 1890] the next seven years of his life were crowded with the great and generous things he did for Richmond and its vicinity employing hundreds of people and so using his money that when he died at seventy-three the greater part of his private fortune was gone, used for the good of the community.

Newspapers at the time of his death estimated his lifetime wealth at seven to ten million dollars.  After the buyout of his company to form the American Tobacco Company, he spent the last years of his life doing, in Grace’s words, “great and generous things” for his beloved city and spending lavishly in the process.

Next installment: What he did with his millions and what was left for his heirs